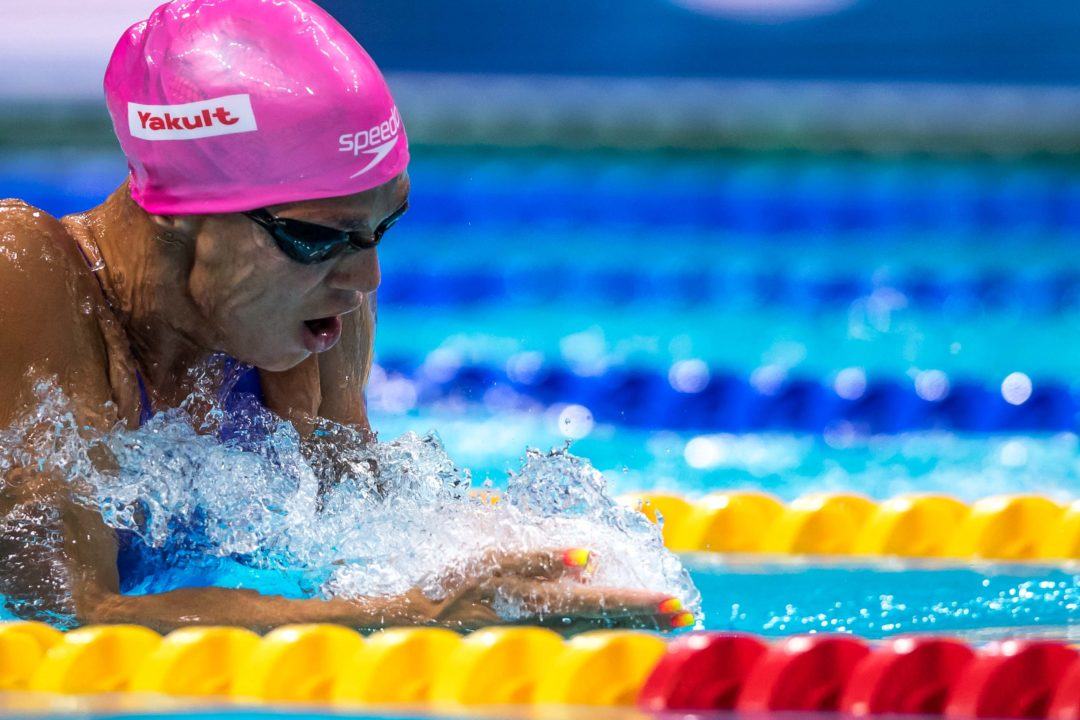 She's been a staple in the international breaststroke field for a decade, controversial for a history of doping offenses and an unforgettable Rio showdown. Current photo via Mike Lewis/Ola Vista Photography

The women’s 200 breast final at the 2021 Russian Olympic Trials saw a surprising finish, as Yulia Efimova finished third, over a full second out of the top-two finish needed to make the Olympic team.

A staple in the international breaststroke field for a decade, controversial for a history of doping offenses and an unforgettable showdown with American star Lilly King at the 2016 Olympics, it’s shocking that Efimova was third tonight with a lackluster 2:24.16.

Efimova, who has already qualified for Tokyo in the 100 breast, has an extremely impressive track record in the 200 breast. One of only five women to have broken 2:20 in the long course version of the event, Efimova’s lifetime best of 2:19.41 from the 2013 World Championships still has her at the #2 performer slot in history. She won the 200 breast long course World title in 2013, 2017 and 2019, while she was the silver medalist in this event at the Rio Olympics.

16-year-old Evgeniia Chikunova posted her second-best performance ever, a 2:21.63, to improve upon her world-leading time this season and win the race tonight. Meanwhile, it was Maria Temnikova who snagged second, going 2:22.76, a lifetime best and her first time under 2:23.

Efimova is known for her back-half, a tactical competitor who likes to lurk over the first 100 meters before jetting off and running down the field. In the 2019 Worlds final, where she won the gold medal by over two seconds in 2:20.17, she had the fastest third 50 by almost a second and the quickest final 50 by over four-tenths ahead of the next-best closer.

Tonight, she was well back of Chikunova and Temnikova to start, which wasn’t really a surprise. On her back-half, though, she just didn’t have the momentum– there was no vicious attack, no final 100 takedown.

In 2019 at Russia‘s trial meet for Worlds, Efimova actually finished third, too, behind the same two women and in the same order (she was a touch faster at 2:23.8). But Chikunova, just 14 at the time, was selected to instead compete at World Juniors in summer of 2019, which made room for Efimova in the event (she had also qualified in the 100, like this meet). All told, Efimova won the world title in Gwangju.

Chikunova is now 16, and with World Juniors under her belt and a couple more years (and multiple 2:21s) to prove herself, it doesn’t feel like that same switcheroo will happen this time. The 200 breast field, which has traded world leaders a bunch over the last several years, will be even more wide-open in Tokyo. Of course, with Temnikova now in 2:22 range and in top form, the Russian team in this event is still pretty lethal as it stands.

Efimova could have returned to Russia to train if conditions in Ca were limited . She did not .

These long comps with semis will throw up more exits for the older or more Covid restricted competitors.

Saying it now: They’ll select Efimova for the 200 and Temnikova for the 100.

Currently even our constitution means nothing – it is beeing brutally violated by Putin, so don’t expect too much in compliance with trials rules LOL

Team Russia has had already a successful precedent giving Efimova a personal ticket to the Worlds following Efimova fully justified the trust, that’s why I see no chance the current problem will be solved in another way.
Either Efimova will get a direct ticket to Tokyo or there will be an additional race Efimova vs Temnikova in Budapest.

This is actually crazy. Has someone ever won both LCM world titles in an event between Olympics and then not made their country’s team in it?

Not quite the same but 🇨🇦 Victor Davis was on the 200m breast podium at every international meet from 2002 to 2007 including Olympic gold and wr in ’04. ’08 National trials he was leading by a huge margin at the 150 before unfortunately fading badly and getting caught by 2 teammates to lose out on a 200 berth.

errr Victor died in the 80s?

Bummer. I guess she just ran out of juice.

Ha I see what you did there.

Efimova just thrown shade to Temnikova. She said that it’s better for the country to let her compete in the event because Temnikova is pretty inconsistent. Dead.

Funny coming from someone who just swam 5 seconds off their best time. I’m betting they try to pay off Temnikova to give up her spot. What is it worth to give up your life long dream meet?

not defending her attitude but the article does mention efimova has been in the same position before with a similar time at trials only to drop massive time at worlds and take the event. Again, not saying she deserves it. but as a consistent medalist on the world stage she might feel entitled to the spot. Kind of reminds me of 2004 when thorpe false started at trials but was given the spot anyways. Didn´t necessarily earn it but I think the second qualifier deferred his spot to thorpe because thorpe obviously represented their best chances to win the event. I think its a similar deal here. While it might not be super polite, I do think she might have… Read more »

It may actually be true. That being said, the Russian Federation specified how you qualify for the games. One trials, top two if under the A standard. Other federation exempted their top swimmers from trials. Japan said all world champs got a pass onto the team. Canada pre-specified swimmers who made it. Maggie McNeil can belly flop in the prelims of the 100 Fly at trials and she still gets the spot. But everyone else knows this going in. For Efimova to get on the team in the 200 breast, they would have to retroactively change the rules after the swim and bump someone off the team that did what they were told they needed to do to be on… Read more »

Yes national swimming federations make decisions like this occassionally. Thorpe obviously won the 400 in Athens but does that make it okay? I think the guy who gave up his spot did so with the promose of a 4×200 relay spot so still got to go and a medal.

Franziska Van Almsiek finished 9th in heats at worlds in 1994 with a team mate in the final. The teammate scratched to let her into lane 8 where she swam the WR and won. Again it is tough on the teamate to be forced to do this.

I agree, very tough on the teammate to have to do this. Unfair ad unreasonable and if they do they’ll probably feel like crap about it for a hot minute. I’m just saying similar things have happened. Ill emphasize again, I’m not supporting that decision, I’m just saying that it doesn’t seem too far fetched if even its wrong to do.

Two things. First, Thorpe immediately went public saying Craig Stevens should not be pressured to give up his spot.

Second, in 2004 both Thorpe and Stevens made the team in other events. So it wasn’t the Aussie federation kicking someone off the team; everyone who qualified for the Games swam at the Games. They just monkeyed the event lineup around and made Craig a relay-only swimmer. In this case, it sounds as though they’d be leaving Chikunova at home.

Not saying the Aussies were right in 2004, just that it’s not quite the same and would be much worse in my opinion because an Olympic qualifier is having their selection put in doubt rather than simply having their… Read more »

Well its been handled with more class before but at the end of the day these things still happened, federations approved it and sent someone other than the person who earned it fair and square in favor of their medal contenders. Not defending it in anyway, just sayin I could see it happening because it has

Some people who imo earned a finals swim have been left out in lieu of them simply because of their status and track records. Fills up seats to have the stars come through for finals. Sure, theyre within the teams parameters to be thrown on the team but people who contested the 1 or 200s at trials or prelims and posted solid performances- hoping to be in finals and stand on the podium probably- had be resigned to prelims only when they may have done just as well if not better than these stars. I also think its a bit unfair but it is within the rules.

This isn’t with efimova but they’ve bent the rules for her before. It… Read more »

In 2016, Pothain gave his 200 free spot to Agnel, but he had already qualified in the 400 which was his best event. So, Pothain would be in the team anyway. Here, 200 breast will be the only event for Temnikova, she won the right to race it and deserves to do so.

In theory, she could, however it’s more complicated than it looks. They already have 4 breaststrokers (2 male plus 2 female) qualified in the 100 breast to use them in the mixed medley. I don’t think they would like to use a relay only swimmer spot for an event they have a lot of choices.
Then, Temnikova was not even third in the 100 breast, she was fourth. So, if they do want an extra breaststroker why not take the one who finished third?
Finally, in the 2019 worlds they chose to put Belousova (who was just the second fastest, she wasn’t relay only) in for the prelims of the women’s medley relay and they ended up out… Read more »

There is no comparison. Thorpe had a false start. Stevens gave up his place for him because they were friends and training partners. The Australian federation did not lean on Stevens. Efimova was soundly beaten. If the Russian federation allow her to swim the 200BS they will be making a mockery of their own rules.

She really said this after race? This lady definitely has no class.

Yep, here you have the article in russian

Try to time the cycle of your PEDs better next time

Unless something changes dramatically King will be favorite in both breaststrokes

King isn’t even the favorite over Lazor in the 200