The Olympics That Would Have Been: Smith, Murphy & King Lead U.S. Gold Rush 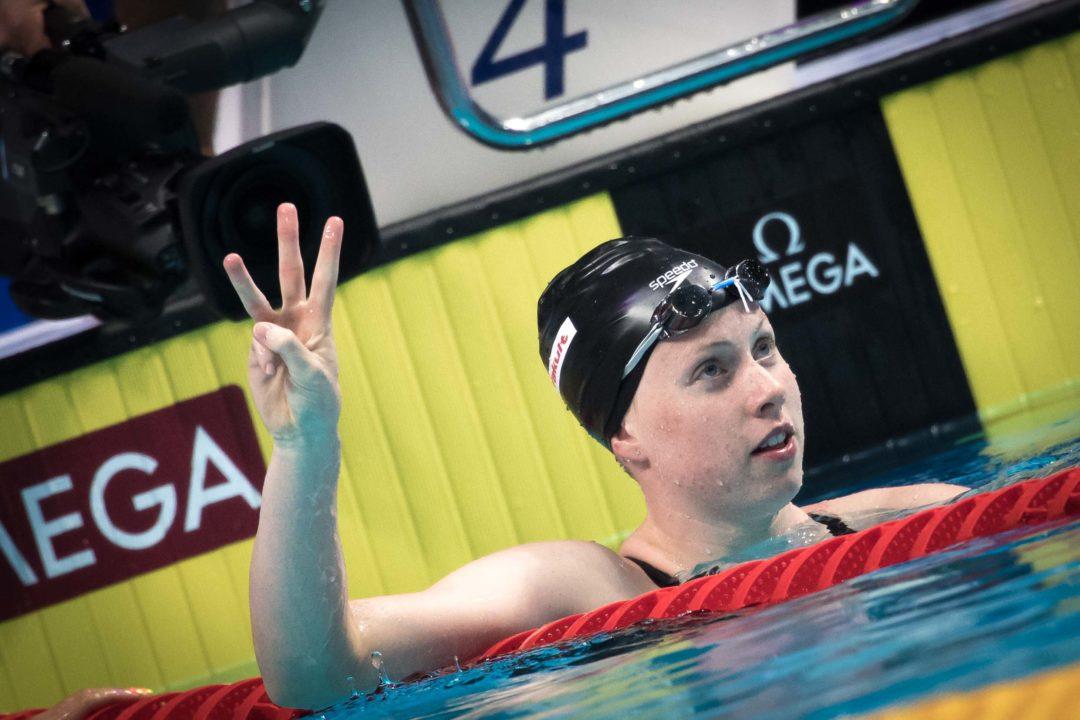 It was a wild Day 2 in Tokyo as all the big stars came to play, and day three promises to be the same with four highly anticipated finals and three sets of semis.

It was a swim reminiscent of Yannick Agnel‘s in 2012, as Danas Rapsys obliterated the men’s 200 free field in 1:43.64, leading from start to finish. The performance was a redemption swim of sorts, as Rapsys had touched first in the final at the 2019 World Championships before being disqualified for a false start. He becomes the first swimmer to win multiple gold medals, relays included, at the Games.

In a wild scramble for the minor medals, Duncan Scott utilized his phenomenal closing speed to snag silver in 1:44.72, followed by Katsuhiro Matsumoto (1:44.86) who continues Japan’s successful run in the pool.

After first setting the world record leading off the women’s medley relay at last summer’s World Championships, American phenom Regan Smith claims her first major international title in the women’s 100 back with Olympic gold. Smith lowers the all-time mark for a third time, ripping a 56.87.

In a close race for silver, Kylie Masse slipped under her Canadian Record in 58.08 with a powerful final 15 meters to edge out Australia’s Minna Atherton, who picks up the first Olympic medal of her career with bronze in 58.26. Taylor Ruck places fourth in 58.54, followed by Kathleen Baker (58.65) and Kaylee McKeown (58.80).

After dominating in Rio, Ryan Murphy had his position as the best male 100 backstroker on earth challenged. The former NCAA star was defeated in both 2017 and 2019, though he did put on a clinic at the 2018 Pan Pacs. The 25-year-old proved once again he performs when the pressure is highest, out-duelling China’s Xu Jiayu and Russia’s Evgeny Rylov for gold in the men’s 100 back.

After an intense pre-race staredown, Lilly King and Yuliya Efimova went head-to-head for the fourth consecutive time in a major international final. Never one to crack under pressure, King opens up fast — 29.69 — not far off her 50 world record. Efimova appears to be gaining ground through the 75, but King surges towards the end and defends the gold, clocking 1:03.96. The swim is a new world record for King, breaking her 1:04.13 from 2017 and the first-ever sub-1:04.

3 world records in a row? This Olympiad would have been a treat

Yes, that is easier said than done (at least for two of them)

Kylie Masse will be 25 years old, Kathleen Baker will be 24 years old, while Regan Smith will be 19 years old. If anyone still has upside it’s Regan Smith. Besides, the U.S. Olympic Swimming Team will not sizzle without Bacon.

…is what happens with most swimmers.

Is she declining or just been eclipsed at the peak of her powers?

Not buying it especially with the ridiculous times posted.

I don’t know where you got the idea that all medalists in the 100 back would break the WR. I was referring to Smith, Murphy, and King all breaking their world records, and I believe Virtus was as well.

Agree, Murphy will be lucky to grab a spot on the podium.

I never said Murphy would break the world record. I just said that in order to do so, all he has to do is go a best time.

I think the Rapsys prediction is pretty good but I think the Americans will do better. Kieran Smith is probably going to have a break out long course swim after his 500 free I think he could be top four. Then I’m just hoping that Eddie has been keeping Haas on a four year taper cycle.

Surely Chalmers is better than 8th in the final?

my username says it.