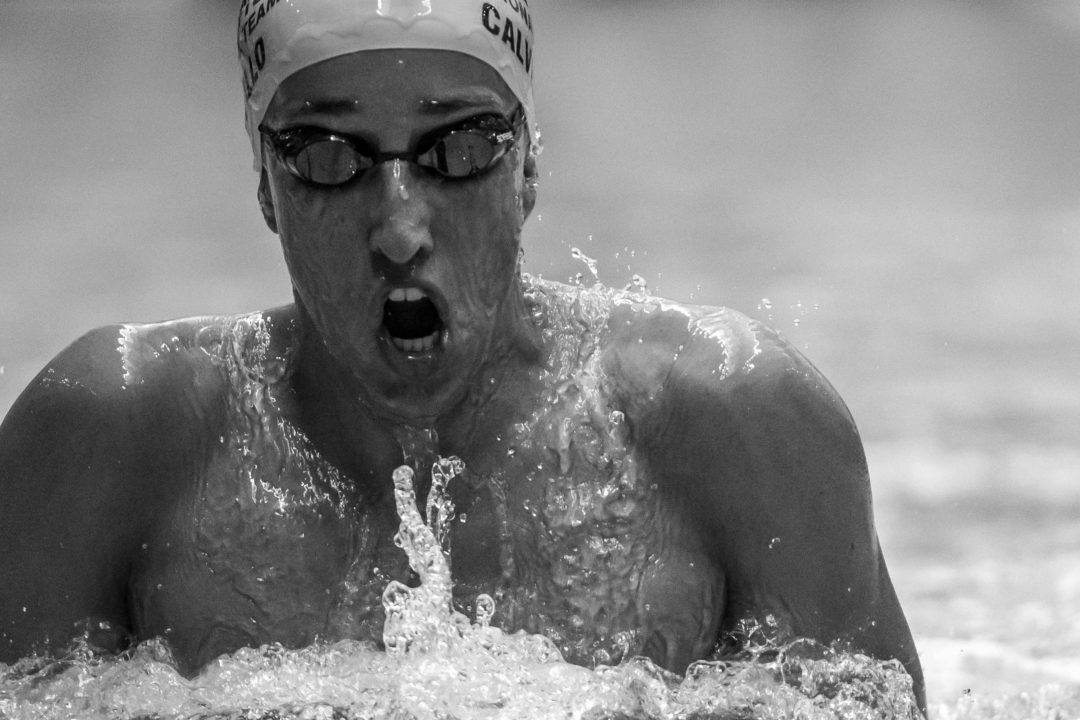 Indiana junior Mikey Calvillo gets called up for the mile (15:01.89), while he also has B-cuts in the 500 free and 400 IM. Archive photo via Mike Lewis/Ola Vista Photography

Texas has scratched junior backstroker Jason Park and junior breaststroker Charlie Scheinfeld from their NCAA roster, bringing their athlete number for the meet down to 16. That gives them space for their four divers who qualified at their Zone meet over the weekend, since divers count for half of a roster spot.

The scratches came within 24 hours of their divers being invited, so two alternates were called up: Navy’s Micah Oh and Indiana’s Mikey Calvillo. Oh was on the alternate list with a 1:43.54 in the 200 fly, while Calvillo was the second alternate at the time of the scratches with his 15:01.89 in the 1650 free.

This is Oh’s first NCAA invite; he didn’t make Navy’s conference roster as a freshman but has made big strides as an upperclassman. Calvillo scored at 2019 NCAAs with a 10th-place finish in the 1650 free, while he was the 10-seed in the mile at the canceled 2020 NCAAs, so his invite could help Indiana in their team race if he can score again.

I thought they weren’t bringing in alternates for those who scratch at ncaa this year?

There are two exceptions to that:

So if all diving regionals are done, those two alternates are the last ones that could be called up, right?

Everyone (including all of the D1 coaches I asked) were surprised to learn about the divers loophole, so maybe there’s another secret criteria that we don’t know about.

Someone please explain how the alternates are picked? Do they go down the list based on tiebreaker points, or is it by event? It doesn’t look like Oh an Cavillo swim the same events as the Texas swimmers being scratched.

They go by tiebreaker points.

Imagine a scenario where after they hit the total swimmers invited cap, they just kept going. These are the next guy’s on the list, by ratio of seed time to “A” cut.

Swimmers are pulled in “by event” until the post-cut psych sheets are released. Then they’re pulled in by tiebreaker order.

PS: Also, Ghaffari was on the list of alternates, but when the official psych sheet was released he was on there as qualified and not an alternate.

I get the part about Texas having to scratch 8 swimmers and other alternates filling those spots. The problem is the predicted alternate list published on SwimSwam does not align to (or explain how) the official alternate list released by NCAA and how the alternates are ranked. Whether you order swimswam’s list by cut line (as in the article) or by tie breaker points (which indicates closest to A cuts), you do not get the same ranking order as the official list. So is there an additional variable used: preference for upper classmen? Event weights?

No. It’s like Braden said. But there’s a step you’re missing.

it is tough for Scheinfeld but it makes sense with higher scoring potentials for two divers. Texas can use Jacob Foster as backup on breastroke medley legs if needed. Jacob’s best time in 100 breast SCY I could find was 52.92 from March 2019 and since then he lowered his time in 200 breast. I hope Charlie will come back with strong senior year.

Charlie went a 51.4 back in November 2018, but hasn’t been within a second of that time in nearly two years.

Your math is wrong.