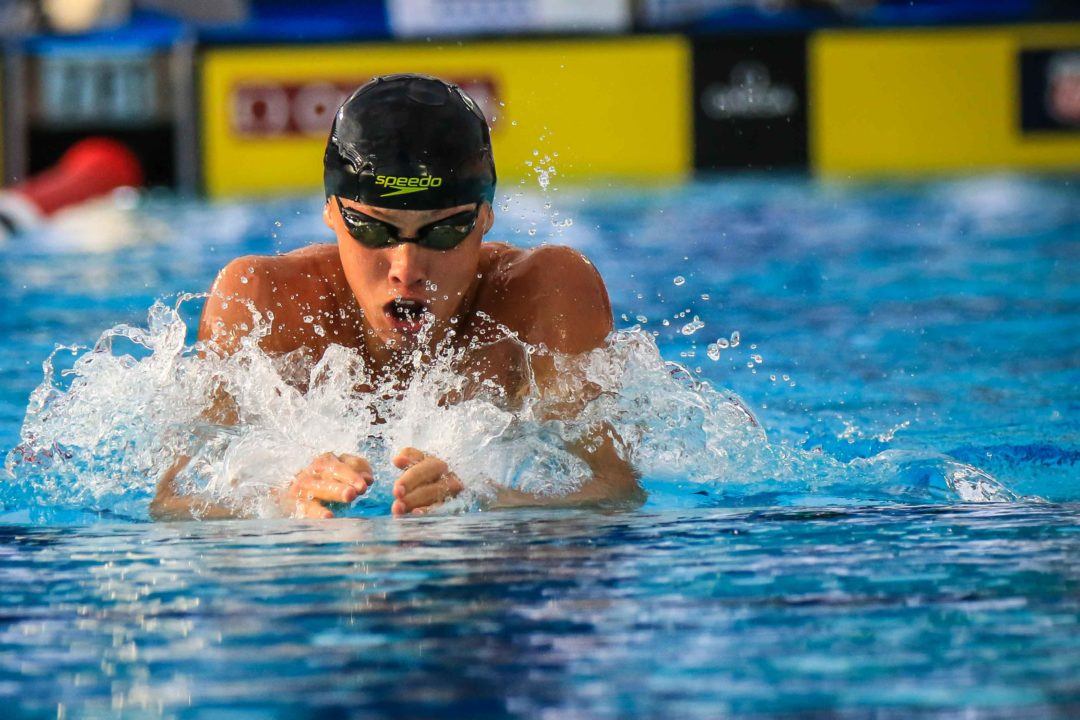 Carson Foster, pictured above, broke a national high school record in the 200 free at the OHSAA Division I State Championships. Archive photo via Jack Spitser/Spitser Photography

The 2019 OHSAA State Championships was wicked fast: a total of ten Division I state records were broken throughout the course of the meet, one of which was a national high school record. The meet was packed, too – in fact, part of the reason why the state meet is held at Canton is because it has more spectator seating than any other pool in Ohio.

Defending OHSAA Division I state champs Mason High School was challenged from the get-go by North Canton Hoover. Though the lead shifted back and forth between the two across the course of the meet, it was ultimately Mason High School that claimed their second straight state team title – even without winning a single individual event. The Mason Comets barely edged out North Canton Hoover in the final team scores, 204 to 201.

North Canton kickstarted their state meet campaign with an impressive showing in the 200 medley relay. The Vikings relay team of Caitlin Cronin, Maya Lewis, Parker Timken and Caroline Ehlers touched first in a time of 1:41.02, breaking the state record of 1:41.88 set by Upper Arlington in 2017.

In the 50 free, North Canton picked up a ton of points thanks to a 1-2 finish by seniors Parker Timken and Caroline Ehlers, clocking times of 22.61 and 23.03. Timken went on to double up with another victory in the 100 free, claiming the top spot with a 49.65 – the only swimmer under 50 seconds.

Ursuline Academy senior Megan Glass, who in 2017 tied Maddie Martin‘s now eight year old state record of 53.34 in the 100 fly, has become the sole occupant of that 100 fly record. She won the event in a final time of 53.31, over a second ahead of the rest of the field. Earlier in the meet, Glass was victorious in the 200 free, topping the competition with a 1:47.77.

Junior Paige McCormick of Hudson earned an individual victory in the 500 free, stopping the clock at 4:48.90, which is over a six second drop from her third place finishing time from last year of 4:55.15.

North Canton and Mason again went 1-2 in the 200 freestyle relay – the quartet of Caroline Ehlers, Reagan St Clair, Kate Lochridge and Parker Timken combine for a final time of 1:32.43, touching ahead of the 1:33.21 from Mason’s squad.

The last state record of the girls meet was achieved by Brecksville senior Hannah Bach. Though Bach was seeded with a time of 59.54, which is well under the state record of 1:00.75 she established last year; she ended up lowering it even further in finals, taking the top spot with a 59.29.

Winning the final contested event of the meet was New Albany’s 400 free relay team consisting of Lexi Elkovitch, Olivia Horovka and sisters Mia and Ava Lachey. They earned a final time of 3:25.92.

North Canton Hoover’s 400 free relay ended up placing seventh in the finals – and even though Mason’s relay was DQ’d in the morning, and therefore couldn’t score points in the final, they still managed to lock in the team title.

Saint Xavier has a rich program history of Division I state titles – coming into the meet on a ten year win-streak, as well as 39 total state team championships. Similarly to last year, they are rivaled by a team backed a lot of star power: Sycamore’s Carson Foster and Jake Foster. Despite the five collective event victories that the brothers accrued, St Xavier remained relentless; taking home their 11th straight state crown with a final score of 310, well ahead of Sycamore’s 240.

That time would currently rank 10th in the NCAA this year, including the times posted at the SEC meet; and is the 3rd fastest time in the USA Swimming SWIMS database for the 17-18 age group, with Foster having an additional year remaining in the age group.

Mason junior Adam Chaney rewrote the record books in both the 50 and 100 freestyles during the preliminaries, posting times of 19.69 and 43.27. In finals, he took wins in both of the events, touching slightly slower at 19.79 and 43.67. Leading off Mason’s 200 free relay in finals, however, Chaney lowered his 50 free record to a blistering 19.64.

In his second individual event, the 100 back, Carson Foster annihilated Justin Grender’s old state record of 47.39, posting a 46.28 in the preliminaries. He later secured the victory in finals, recording a 46.62 – marking the only two 46s in OHSAA history.

As if the two brothers were destined to follow each other up, Jake Foster took down the 100 breast state record of 54.35 held by Ross Palazzo, registering a scorching 53.31 during the heats. Jake added a bit in finals, but easily managed to net his second state title with a 53.76.

Though Sycamore’s 400 free relay – comprised of the Foster brothers, as well as Noah Patterson and Ansel Froass – took the win over St Xavier’s, 2:59.97 to 3:01.79, the team championship had long been secured for St Xavier. This marks their 40th title in program history.

It’s Swimming AND DIVING, just a mention of the diving competition would be greatly appreciated by many,

they did mention diving..

It was truly an epic meet. The best part about it from my observation on deck was the interactions between the athletes, be they St. X or Sycamore or Hudson or Mason or Hoover…..they were FOR each other. They were genuinely happy for the record breakers. They were tough competitors but they were not wishing someone else to not do well. I overhead so many conversations. It was encouraging all the way around.

We know u rep the fosters. Thought u worked for marlins?

Even with Chaney’s points, SycaRays still don’t outscore St. Xavier. This is a pointless, fanboi comment.

What about the points from St.X that are from Manta Ray Swimmers?

None of the St. X kids train with Mason during the year…that’s what makes St. X a TEAM and their coaches real high school coaches. Your argument is ridiculous, just like you changing user names every post.

You guys need to stop doing this every time Ohio High School swimming comes up. It’s not a good look for anybody.

What if you count McDonald’s points as well?

The St. X Kids train with Mason from end of Feb – beginning of Dec. So if that isn’t during the year, I don’t know what is. Manta Rays are doing something right in Mason. 80 of St. X’s points were from Rays……just saying

Of course, the RAYS would win a High School championship. They would probably beat the Dayton Raiders and Cincinnati Marlins as well. They are top 5 swim club team in the country. But, they have no standing in Ohio high school swimming and are rightly not mentioned in the article above….

The results link indicate that the Finals times were: Sycamore 2:59.97 and St Xavier 3:01.79. It appears that Swimswam referenced the Prelims times.