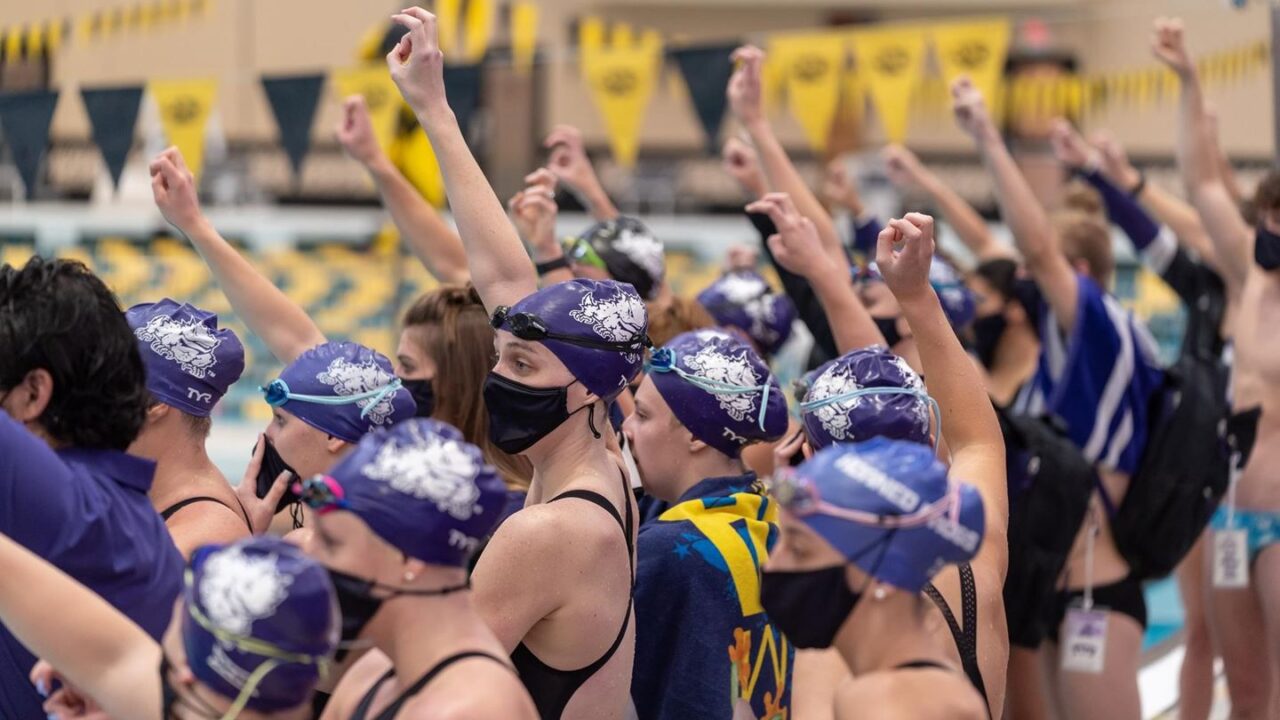 With the team divided between the FIU Classic and the dual meet against UTPB, TCU came out on top at the dual meet for both men and women. Stock photo via TCU Athletics

The TCU Horned Frogs pulled double duty over the weekend. While part of the team was in Florida competing at the FIU Classic in Florida, the rest of the team played host to University of Texas at Permian Basin for a dual.

The UTPB men placed third last season, and the women sixth, at the New South Intercollegiate Swim Conference Championships, a Division II conference. TCU placed third for both men and women at the Big 12 Championships. TCU remains undefeated in the three matchups against UTPB since 2014.

On both the men’s and women’s sides, TCU created a trend of sweeping, or at least winning, most events, with a couple of standout performances from UTPB.

The trend continued with the next event — the 100 backstroke — where TCU’s Joao Andrade led the way with a time of 51.76. Halfway across the country, the team’s number one backstroker, Stefan Varga, swam the event in 50.70.

TCU would go on to sweep the 100 breaststroke, with Jadon Wuilliez winning with a time of 57.54, though it was still a couple seconds off of Vitauts Silins’ 55.87 swim at the FIU Classic. TCU would also sweep almost all of the other events until it exhibitioned the 100 butterfly, 3-meter diving, 200 IM, and 200 freestyle relay.

UTPB ultimately gave TCU a run for its money in the 500 freestyle, when freshman Niklas Heelein defeated sophomore Charlie Brennig. Earlier in the meet, Brennig, the fifth-place winner in the 1650 freestyle at the Big 12 championships, won the 1000 freestyle by over 15 seconds with a time of 9:46.40. But Heelein traded places with Brennig after coming in second in the 1000 freestyle. He won the 500 freestyle with a time of 4:46.08, beating Brennig by about a second. Heelein, who comes from Germany, has a history of competing in distance freestyle events, including finishing second in the 1500 meter freestyle at German National Championships.

UTPB’s diver Matthew Lenzo also aided the team in its battle against TCU. He won the 1-meter event, which was not exhibitioned by TCU, and the 3-meter, which he would have won outright even without the help of TCU’s exhibition.

The TCU women also swept many events, but UTPB’s athletes still managed to take down their opponent in a few key races.

The Horned Frogs also swept the 1000 freestyle, with freshman Jordan Edwards at the helm with a winning time of 10:40.44. The top-three sweep for TCU continued with the 200 freestyle, with sophomore Serena Gould notching in a 1:55.92 win.

UTPB’s Jazzy Tscherne stepped in early on in the meet to keep TCU from sweeping the 100 backstroke. Her time of 1:01.09 earned her second place. TCU’s freshman breakout star, Francsesca Pasquino, was absent the event in this dual, instead winning overall at the FIU Classic with a time of 56.01.

In just the next event, freshman Erin McGuire put a stop to TCU’s winning streak when she out-touched TCU’s Audrey McMurry and won the 100 breaststroke with a time of 1:09.38. McGuire would go on to place second in the 200 breaststroke.

Despite some well-placed swims, the UTPB women still fell to TCU by 61 points.

TCU returns October 15 and 16 for the Trojan Invite hosted by USC, while UTPB will compete in a dual meet with Trinity (Texas) at the end of the month.