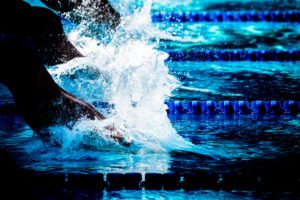 Swimulator projections have Texas A&M winning the men’s SEC title with a 230-point margin over Florida, but voters strongly favored the Gators in our poll.

Our most recent poll asked SwimSwam readers for their input on college programs wearing tech suits for dual meets:

Almost two-thirds of voters were opposed to college teams wearing technical suits for regular-season dual meets. The trend is a growing one in college swimming. Missouri was the most high-profile, with news breaking in October that the Tigers would suit up for every meet this season under new head coach Andy Grevers.

But they were far from the only program to utilize tech suits. Virginia nailed some big times early in the season, wearing tech suits at the Trojan Invite. The SMU Classic format meet has long been an early venue for suited swims. And we’re seeing more and more how programs are using early-season speed to build buzz around their programs during the key months of recruiting.

Most swimming fans (and many coaches) seem to fall into the traditionalist mold, opposing the use of suits, rest, or shave-downs until the post-season. But college programs are beginning to evolve, seeing the benefits of early-season speed. And we notice more and more each season how worries that a team has been “too fast too early” wind up holding no water, as the teams who are fast in September and October find ways to remain fast and get faster come February and March.

To be fair, the question didn’t specifically address the success rate of suiting up. It only asked fans if more teams should suit up. Maybe fans prefer to see early-season swims without tech suits. It’s certainly possible that when some teams suit and others don’t, fans have a hard time evaluating who looks good early in the season and who doesn’t. Swimming already has a bit of a ‘regular season’ problem, with the stakes so substantially lowered for meets outside of major, end-of-season rest events that fan interest is seriously subdued until the postseason.

There’s also a cost concern in an era of cutting swimming & diving programs at the college level. We’d suspect most teams are reusing old tech suits for the regular season, though it’s possible sponsors are kicking in more suits than in previous seasons.

On the other hand, we’re also learning more and more that challenges long-held schools of thought within swimming. We’ve talked to experts who have thoroughly disproved the notion that swimming fast early in a season automatically means a team rested and won’t perform well at the end of a season. Every year, we hear the complaints about a team swimming fast in the fall, only to see that team swim faster in March.

Suiting up has been a much more open storyline this fall, though, than it has in the past. And the narratives about suits are going to be heavily impacted by how teams like Missouri and Virginia compete at their conference meets and NCAA Championships. But don’t be surprised if we see the trend continue, with more and more teams focusing on fast swimming at multiple points during the season, rather than saving all of their advantages for the post-season.

Below, vote in our new A3 Performance Poll, which asks voters to predict the winners of the International Swimming League finale next month:

Also wondering, with faster and faster NCAA invite times, if a swimmer missed the mark in the suit-up mid-season invites and try to do a last push before conference meet, banning tech suits at dual meets may make that harder.

I think you ask good questions. I also expect that there’s a 0.0001% chance of legislation like this going into effect. It’s too restrictive – college coaches haven’t set up their seasons to be ‘restrictive,’ they want as much freedom as is possible. And the wrinkles would be too complicated to write and enforce. It would add an additional administrative expense and task, and teams would just redefine their dual meets as “2 team invitationals.” All of that heaped on top for what gain? And, even if it did, if a coach like Andy Grevers genuinely believed that this would make his team better, then he would probably shrug and say “okay, well then we’ll forfeit all of our dual… Read more »

OMG who cares. I honestly don’t see any reason why teams should or shouldn’t do it, except a lot of people here are curmudgeonly about it. Get over it!

Well I for one care and do not consider myself curmudgeonly. Teams should suit for dual meets for the sake of modesty. While the human body is a beautiful creation, it is not yet time for collegiate athletes to swim fully exposed.

Vote Up5-12Vote Down Reply
The Importer AND Exporter

That’s a good point. Meets would never be on TV if swimmers had to swim naked.

I shaved and rested my swimmers at an invite that wasn’t the meet where everyone else in the lsc traditionally suited and rested… all we heard that week from other coaches and swimmers was how stupid we were, even though the next week they all suited up… so you’re right, who freaking cares? The sport is about swimming faster than you have before, nothing else