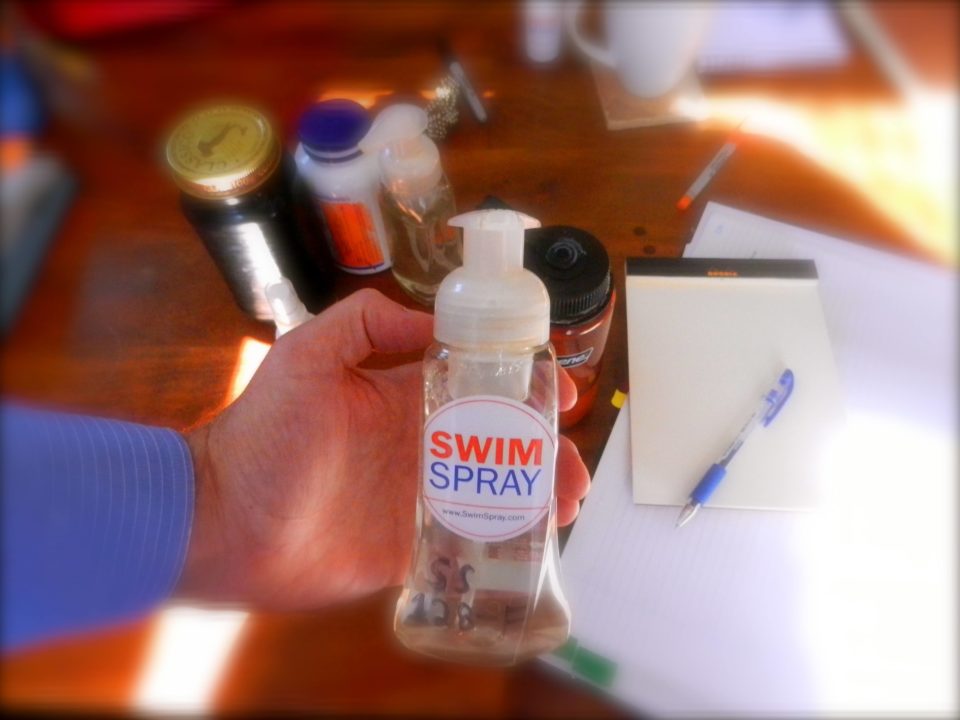 What's the SwimSpray culture like? "We’re all college swimming buddies. That turns out to be huge for a couple of reasons: Everyone understands how to work hard; and everyone adopts a very team-oriented mindset."

When swimmers pull through the water with their fingers slightly opened (about 5-10 mm apart), they push more water.

I recently sat down with Andrew Chadeayne, founder of SwimSpray, to get the 411 on his company and the culture at SwimSpray.

What do you do at SwimSpray?

My day to day?  People ask me that all the time.  It changes so much depending on what needs to be done.

Last week was great, mostly talking to customers and swimmers about SwimSpray.  Talking to SwimSpray users is probably my favorite thing to to. It continually reminds me that we’re doing real good for people.

Any high points in customer relations from last week?

Definitely.  Last week, Dana Vollmer had an incredible meet at the Indy Grand Prix.  The day before she left for that meet, she told us that SwimSpray worked for her and she was taking it to the meet.

On Thursday, I got an email from a customer that said “thank you for inventing this.”

And, on Friday, The Barefoot Triathlete blogged about SwimSpray, saying “In short, I’m sold after one use.  If you try it and don’t like it, I’ll buy it from you.”

Are you still developing new products?

Yes.  I just finished the prototype for a new SwimSpray foaming wash. (See featured photo above!)  A lot of our customers wanted some sort of anti-chlorine soap.  So, I spend about six months messing around with possibilities until a got it right.  It’s awesome!  Now it’s ready to send to the development lab.

What takes six months before sending something out for development?

SwimSpray is a wildly new idea, so most testing facilities don’t have a protocol for testing it.  Before we do formal testing, it’s nice to have a back of the envelope idea of what you’re dealing with.  I basically satisfy all of my own curiosities before asking any one else to play around with a new product.  You’ve got to figure out what questions to ask first, before you can ask someone to answer them.

I should point out that my wife is very patient with me here.  Last week, I was testing a new packaging design by heating up bottles in a pot of boiling water… you know, just in case that ever comes up.  While I was doing this experiment,  Tara came home from an all night shift to find foam flying all over the kitchen, just as the bottles went BOOM!

What’s different about SwimSpray compared to the other “swimmer’ shampoos”?

That’s easy.  It works.  That’s my favorite thing about SwimSpray.

It’s not a fancy bottle or a clever marketing campaign.  I think that’s super cool because so many health products are just smoke and mirrors.  Not SwimSpray.  Every single person who has tried it says it works.  We’ve gone through tens of thousands of bottles.  And zero people say that the product doesn’t work.

We’re all college swimming buddies.  That turns out to be huge for a couple of reasons: Everyone understands how to work hard; and everyone adopts a very team-oriented mindset.

How do you think growing up swimming factors in to work ethic?

Everyone on our leadership team knows how to get things done.  We all swam at Princeton.  We all swam 4 hours a day while balancing a full class schedule.  Now, we swim less but we’ve added a start up company.  It’s the same mindset — go hard or go home.  For example, not just everyone is willing to schedule a Board meeting from 8:30 to Midnight.  But if you spent most of your life waking up at 4 am, this sort of schedule seems almost reasonable.

What do you mean by SwimSpray’s “team-oriented” attitude?

I think we put the team above ourselves.  For example, last week we had a miscommunication in our receiving office.  Long story short, a truck showed up with a pallet of SwimSpray.  That’s about 4000 bottles.  Our COO, Peter Wong, went to the loading dock and personally broke down the pallet without even thinking about it.  I’ve worked at other jobs where people would have spent twice as long arguing that they were too important to do that sort of work.  But that’s selfish thinking.  And Peter is not like that.  He just rolled his sleeves up, made the problem go away, and then posted a joke about it on Facebook.

That’s another huge advantage to being a part of the swimming family.  I feel like all of our old teammates are still around us, cheering just as loud, and boosting our performance.  Last week, we announced that Jamie Holder was joining SwimSpray. Within a few hours, 50 people liked the post and offered congratulations.  It’s just a great atmosphere to work in, where everyone is positive and supportive.

Do you have anything big planned for the next couple of weeks?

Always.  We’re young, so we’re growing fast.  I think that the next big project will be finding the right summer associates.  We’re going to ask for applicants soon.