Watch this swimming video. You’ll be glad you did. Little Nug Bin (and Shannon Woods) are inspiring.

Like pools in the United States, pools in Australia are most frequently sanitized with about 1.5 – 5 parts per million chlorine. Aussie swimmers notice that the chlorine lingers on hair and skin, even after normal showering. No product in the Australian market eliminates this lingering chlorine.

Celebrating in the Pool: Senator John McCain Hates it

Senator John McCain is one elected representative who is undistracted by the looming government shutdown in less than two weeks. Instead Senator McCain is focussing on the important issues. And what could be more important than the LA Dodgers celebrating in the Arizona Diamondbacks’ pool?

Seattle Seahawks quarterback Russell Wilson got the best of his NFC West rival Colin Kaepernick with a 29-3 win over the 49ers, and he did it by relying heavily on his star running back, Marshawn Lynch. Although many factors go into exceptional performance on the field, this pair of stars both spend time in the pool. Could swimming be the Seahawk’s secret sauce?

How To Eliminate Chlorine From Hair and Skin After Swimming

We made this simple 30 second video to show how to eliminate chlorine after swimming. Despite our written and illustrated instructions, we still get lots of questions about how to use SwimSpray. (Image courtesy of SwimSpray) 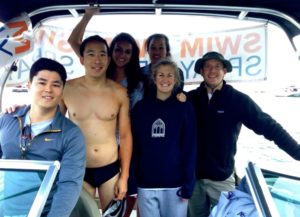 More SwimSpray: Behind the Scenes

Team SwimSpray Had a Golden Debut at Masters Nationals

Team SwimSpray trains at the Wilson Aquatic Center in Washington, DC. Recently, the city banned water bottles anywhere on the pool deck because the health inspector classified them as “food.”

“All jokes aside, the phenomenon reported by Ryan Lochte is nothing new to the swimming world. Swimmers have been “smelling like the pool” since chlorine was first added to pools.”

Abby is about two months away from finishing her first year of medical school at UVA. When she’s not studying, Abby is either coaching the Charlottesville YMCA Aquatic Club (CYAC) or training on her own, for long distance open water swims.

“The scientists at SwimSpray, LLC claim to have invented a simple, all-natural remedy for swimmersï¿½ longest standing problem: chlorine.”

“Green hair color comes from copper depositing. Look at the photo of this chemical isolated in a vial. Note the color similarity between this chemical and a swimmer’s green hair.” (Swim Photo Credit: DAS)

From Dr. Andrew Chadeayne, Inventor of SwimSpay: Swimmer Gift?  Gift for a Swimmer? “Gift idea for a swimmer?  These are…

SwimSpray: Behind the Scenes Swimming News by SwimSwam