Team SwimSpray Had a Golden Debut at Masters Nationals 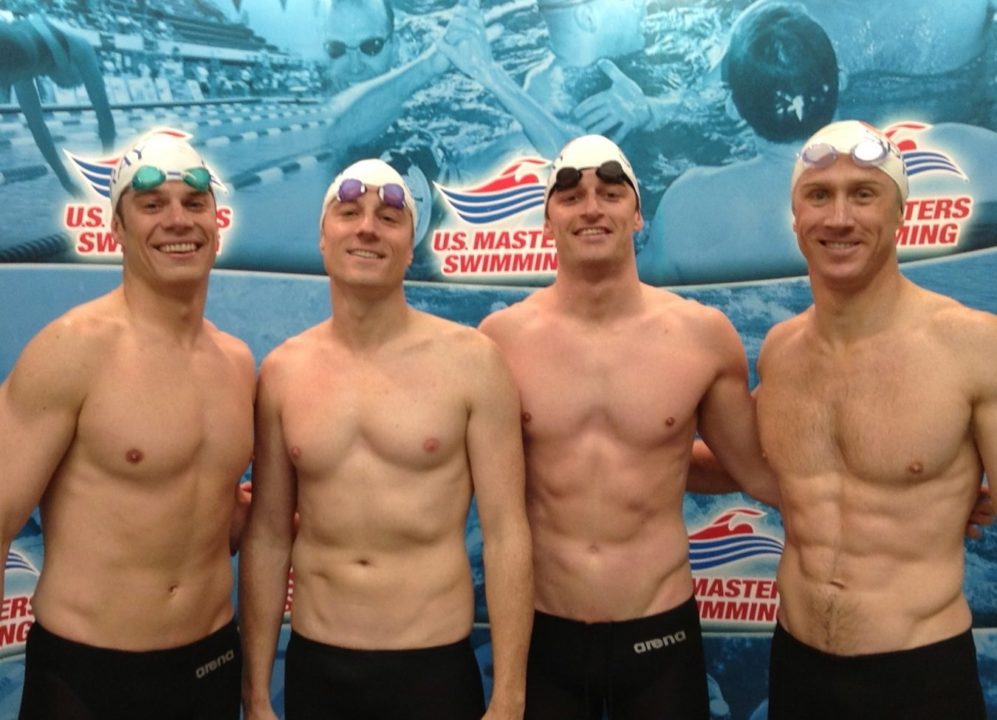 Ryan McCabe won the 25-29 500 freestyle with a time of 4:45.32.  Looking back on the meet, Ryan said “Masters Nationals offers the friendly atmosphere that makes the meet incredibly fun.  Plus, the level of competition is incredibly high, which is something that you don’t always see at regional meets. The IUPUI Natatorium just adds to that excitement.”

“Masters Nationals is always a great experience.  There is something about having the dynamic of Olympic hopefuls mixing it up with people born almost a century ago that keeps the meet entertaining throughout.  It’s a lighthearted environment filled with people that are there because they love the sport, and no other reason.  I just love this sport”

SwimSpray’s 200 Freestyle relay (Kevin Gallagher, Tom Krajewski, Brendan Gallagher, Liam Gallagher) finished in 1:24.38 – 2nd in the 25+ age group and 3rd overall.  (Yes, that’s three Gallagher brothers!)  When asked why he likes Masters Swimming, Tom said “Nationals is especially fun for me since I’ve lived in 10 cities in 10 years, and normally see many people who I used to swim with in the various places where I’ve lived.”

This was Team SwimSpray’s first year competing as a masters swim team.  Cheif Operating Officer, Peter Wong assembled the team in 2012 in an effort to get people together for regular workouts in Washington DC.  Team SwimSpray trains at the Wilson Aquatics Center in Washington, D.C. and the Washington & Lee High School pool in Arlington, Virginia.

According to SwimSpray’s President, Andrew Chadeayne, “SwimSpray is dedicated to being a company run by swimmers for swimmers.  Over time I hope that SwimSpray can continue to show how much we love and care about this sport.”

As with the Y Nats, I can once again brag about swimming in NJ. The Gallagher brothers swim/swam at my Y or I should say that I swim at their Y, since they rule the pool. They also own a large amount of my art work. Some day, you should contact Matt Donovan of the Somerset Valley YMCA, since he is at the center of the NJ swimming universe. He knows us all. If anyone can break the dominance of California, Texas and Florida in US swimming, it could be NJ and Matt is an important part of NJ’s rise.

Congratulations to Matt on a good short course season. Unfortunately, you cannot compare his program to great programs in California, Texas, Florida or even New Jersey, because his program is still unproven in a Longcourse pool. His team has consistently failed to perform longcourse and you can’t make an Olympic team or any other important National team without producing times longcourse. Compare his teams longcourse records to other great teams and you’ll see what I mean. He is not even in the same stratosphere. If you want to point out great YMCA teams, then you should point out teams like Sarasota YMCA or York YMCA whose teams have consistently produced both Short Course and Long Course. Good luck to Matt… Read more »