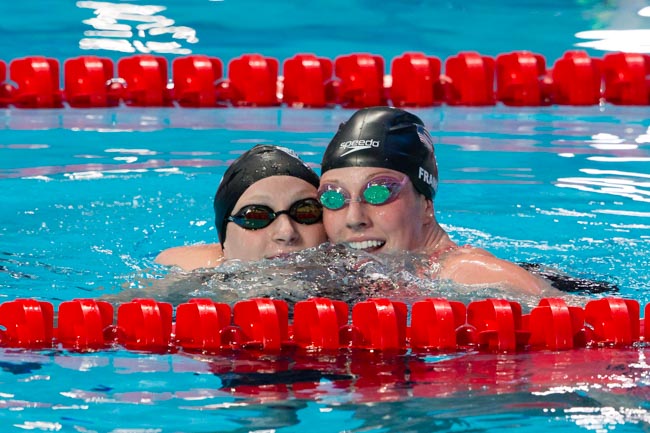 Katie Ledecky (gold) and Missy Franklin (bronze) picked up medals in the 200 free at the 2015 World Champs; an event we could see them face off in again in the finals in Rio. Archive photo via Tim Binning/TheSwimPictures.com

Happy Birthday @conorjdwyer hope you have a good day buddy ??

So… were you singing or screaming?

Another day at the office pic.twitter.com/60t9w2LFiq

Getting home after a hard workout. pic.twitter.com/u7eSYsgzw4

Push through! Taper is only so far away.

We’re moving right on through January, which means Rio is that much closer, and the best swimmers everywhere will be fine tuning their racing in the coming months. French freestyler Yannick Agnel, who’s been off the grid for awhile, has two gold medals to defend from 2012.

If you don’t flop out on the deck after a main set, you aren’t training hard enough.

Let’s hope you got some actual yardage in, too.

Two great coaches with years of swimming under their belts. The Georgia women earned the W over the Texas women, while the Longhorn men topped the UGA men this weekend.

Can they repeat? This Olympics, they could be going head to head in the same race.

The look you give when your coach gives you a hard practice @SpeedoUSA @speedo @FloridaGators #roadtorio #turnitup pic.twitter.com/NuoR7VKdnn