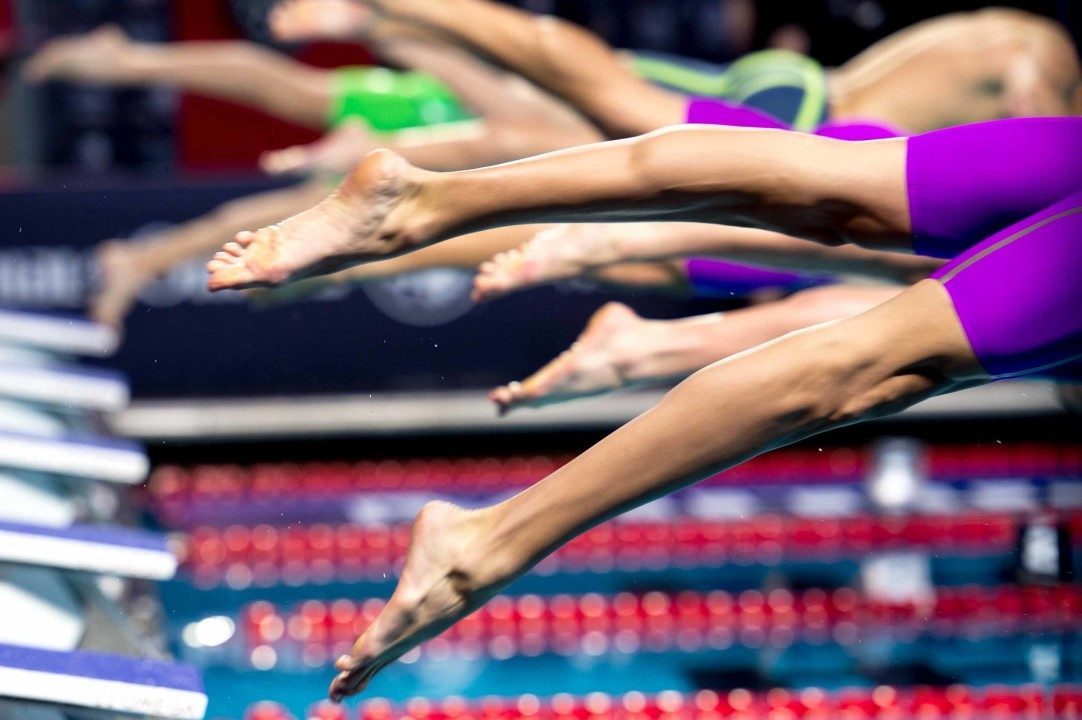 In one of the great Division III rivalries, Williams and Amherst faced off last night in Amherst's home pool. For the women, Williams walked away victorious. On the men's side, Amherst came out on top with a narrower margin of victory. Current photo via Mike Lewis/Ola Vista Photography

In one of the great Division III rivalries, Williams and Amherst faced off last night in Amherst’s home pool. For the women, Williams walked away victorious with a final score of 180-114. On the men’s side, Amherst came out on top with a narrower margin of victory, 124-113.

The Ephs defeat of Amherst marks the ninth straight victory in head-to-head matchups and brings the Ephs’ season record to 4-0. Williams started out strong with a B cut in the 200 medley relay (1:45.71) and never looked back.

In the second women’s event, the 1000 freestyle, the Eph women swept the top three places led by junior Megan Pierce (10.20.91). Her first year teammates Alison McNamara and Kristina Barry followed her to the wall with times of 10:37.78 and 10:46.24, respectively. While the 1000 is not an event contested at the NCAA meet, Pierce’s time was the fourth fastest in the DIII pool so far this season. Pierce would go on to win the 200 butterfly with a B cut of 2:04.21, finishing more than four seconds ahead of the next fastest in the field. That time also cracks into the top 10 in DIII, as 7th. Perhaps more impressive is that it was swum at a dual meet, not in a championship format. Last on Pierce’s To Do List was the 200 IM which she also claimed a victory in, posting another B cut of 2:07.29 to finish more than three seconds ahead of the field, and lead yet another sweep of first through fourth.

Junior Olivia Jackson grabbed the individual victory in the 100 backstroke (57.51) and then led a second full sweep of the 200 backstroke, touching in at 2:03.52. Katherine Bennett and Katherine Priest touched behind her in 2:05.21 and and 2:05.85, respectively.

In possibly the most nail-biting race of the evening, Amherst claimed its third and final individual event victory courtesy of freshman Livia Domenig in the 500 freestyle. Domenig led wire to wire and managed to hold off a late charge by Eph challenger Lauren Jones by a bare .01 to take first with a final time of 5:12.35 to 5:12.36.

To close out the night, the Jeffs threw down a dominating 400 freestyle relay, featuring three freshmen (Zoe Pappas, Domenig, and Dorit Song) and one senior – Hyde. Their final time was 3:32.40.

For complete results of the women’s meet, click here.

From the get-go it was a back and forth meet between the Ephs and Lord Jeffs. Williams began the meet with a win in the 400 medley relay at 3:25.15, more than two and a half seconds ahead of the runner up Amherst squad. Ben Lin led off the relay with a 49.21 leg which puts him fourth in Division III this year in the 100 back, an impressive feat considering this was a dual meet not a championship where athletes are suited. Later, Lin returned to the pool to snag another victory for the Ephs with an individual win in the 100 freestyle (46.24).

Immediately in the next event, the Jeffs rallied and ended up tallying eight wins total in the meet. Connor Haley gave Amherst its first win of the night in the 1000 freestyle with a start-to-finish lead culminating in a 9:52.82.

Kaison Ifill grabbed the title of sprint king for the meet with his victory in the 50 freestyle (21.22). Less than two tenths behind was teammate Alex Dreisbach for a 1-2 finish racking up points for the Lord Jeffs.

Matt Heise also contributed additional points in the 200 backstroke, grabbing the win with a 1:54.15, about half a second ahead of a trio of Williams swimmers.

In the final event of the evening, Williams got back up and won the 400 freestyle relay (3:08.30) but it wasn’t enough to beat back the inevitable.

Amherst will be back in the pool on Jan 23 in New London, Conn facing off against Connecticut College at 1 pm.

Wow, I didn’t expect the Amherst men to look so sharp! Surprised they pulled this off especially with Spiro only swimming the medley. Still calling Williams to have a higher NCAA finish but this is telling for NESCACs.

Great upset win for Amherst but NESCAC has a very different scoring system that favors large and deep team’s like Williams. Expect Williams to prevail at conference but Amherst should make it a closer race than last year.

1:50.5 in the 2 breast at a duel meet? Im predicting he is going to make the olympic team and smash the world record!!!