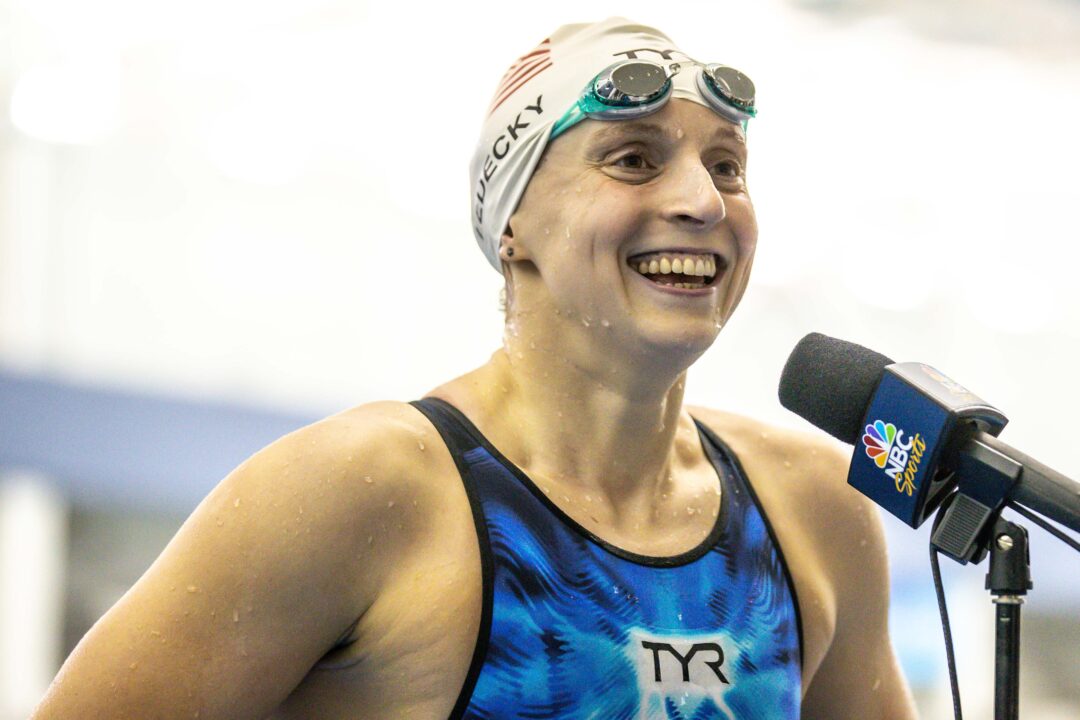 That’s exactly what Swimming Stats’ Instagram page has just published. And we now have one more demonstration of how legendary Katie Ledecky is.

Regarding Ledecky’s dominance in the women’s 800 freestyle, there is not much to add. She has been undefeated for over a decade, is the three-time Olympic champion, and is almost 10 seconds faster than any other woman in history.

It is logical that she would be the active swimmer with the most consecutive years ranked as the world’s number one. Since 2012 she has been the fastest woman on the planet, which means she has been at the top of the world ranking for a decade.

There are other retired swimmers who deserve honorable mentions:

And that’s why Adam Peaty‘s feat is also amazing. He has been the fastest swimmer in the men’s 100 breast since 2014, which means eight years. Two more years and he’ll be dominant for a decade, tying Ledecky’s record – although she’ll probably extend her record in the coming years as well.

What years did peirsol win the 200 back? I know they weren’t in a row but I’m just curious.

Even before the height of pandemic in AUS, Ariarne Titmus did not swim an LCM race of any type from Aug 2019-Dec 2020, a period of 16 months, and a mysterious but quite consecutive and conspicuous absence from that segment of competition. Kiah Melverton and Maddy Gough were the top AUS 400 Freestylers for the 2020 season, while Ledecky, Wang and Sullivan were top 3 in the world.

She’d have swam at the same number of meets in 2020 as Ledecky if her whole club hadn’t withdrawn from NSW Champs in March because of covid but apparently not swimming a meet in March when a pandemic is exploding is suspcious. There were even plans to swim at the Pro Swim Series in the US but we all know what happened to the rest of that series after Des Moines.

Not surprised considering the lack of depth in women’s distance swimming. Probably will get downvoted, but it’s the truth.

This is really embarrassing for you buddy

You could literally say the same about mens breaststroke through??? Aside from Kamminga no man has been sub 58 in breaststroke, you could call that a “lack of depth” as well (besides peaty obviously)

It’s not a lack of depth, it’s that Katie has set the standard so high that all the other female distance swimmers seem really bad when they aren’t…like titmus, Wang, and quaderella have all been at Adlington WR level so if Katie hadn’t existed they would be hyped as the best and you wouldn’t complain about the lack of depth in womens distance

I don’t care about being downvoted. I am not a fan of likes in forum anyway because it promotes groupthink.

Oh and don’t get me wrong about Ledecky. She is the GOAT and deserves all the allocades and praise. She is awesome.

But still does not change the fact that distance swimming has poor depth. You swimming nerds (including myself) have to admit that they are not as competitive as the sprints.

Yeah, sprints are usually more competitive because more people are willing to do a 100 than a 800 or a 1500, but that doesn’t mean that a distance win streak should be discredited as less impressive. Also, about distance swimming having no depth, have you seen the mens side of distance swimming right now? The depth there is incredible and has been for years now

Nah, Peaty is more impressive. Easy to win a distance event than a sprint.
Go sleep little girl, you have homework for your high school next week.

“You swimming nerds (including myself) have to admit that they are not as competitive as the sprints.”

A lot of swimmers don’t have have the tenacity to do anything about a 200.

This is a little unfair as there wasn’t enough long course swimming in 2020.

Why the downvotes? Many swimmers’ streak got broken in 2020 because they didn’t have opportunities to race in long course due to covid.

You are right. Of the 8 you mentioned, all or at least 75% of them would have continued the streak through 2020.

After Athens04 Phelps had lack of motivations to train in some signature races, like 200 fly and 400 IM. So, at Worlds05 in Montreal he tried a different schedule: from 100 to 400 free, 100 fly and 200 IM. Obviously his form wasn’t scintillating also in these races but Phelps was so great that, even in that “low profile Worlds”, he won more medals that everyone else (but Grant Hackett was, rightly, considered the best swimmer of these Worlds where he won from 400 to 1500 free, swimming also a WR in the 800 free).

I remember Phelps saying he went 1:55.3 or something after worlds in 2005, and knew that he was slacking off too much.