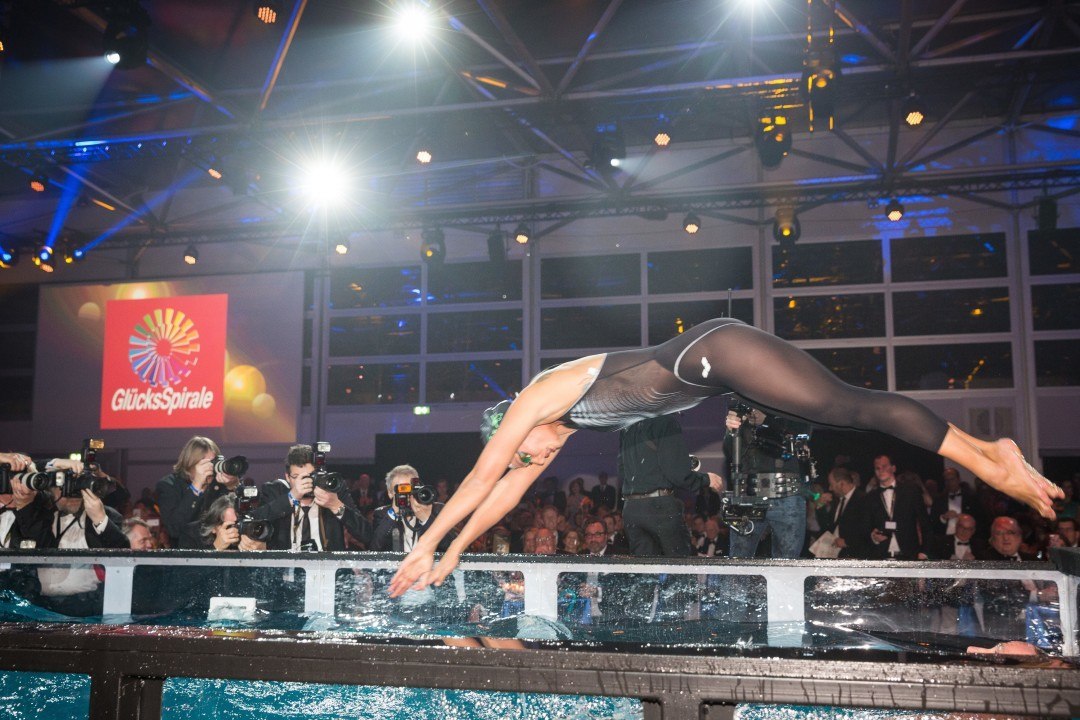 The 46th “Ball of Sports” was held in Wiesbaden, Germany, on February 6th. For the first time, Germany’s Federal... Current photo via Deutsche Sporthilfe/Herschelmann

The 46th “Ball of Sports” was held in Wiesbaden, Germany, on February 6th. For the first time, Germany’s Federal President Joachim Gauck visited the benefit gala of the German Sport Aid (Deutsche Sporthilfe). In the 2016 Olympic year, the charity gala took place under the heading: “Performance. Fair play. Together.”

The audience celebrated and honored especially  the newly minted European handball champions- the German men’s team won the European Championships one week ago – but also swimming had an amazing stage in front of 1,600 invited guests .

The proceeds from the charity gala, every year about 750.000 euros (845.000 USD) goes to the German Sport Aid. The promintent athletes, this time again over 100 medalist at Olympic Games, World and European Championships met the representatives of the top companies of the German economy – more than 150 companies participated as sponsors. Among other things, there was a raffle with prizes worth 500,000 euros (560.000 USD).

A 25 m long pool was built into the “Bilfinger-Ball-Arena” for the 46th Ball of Sports in Wiesbaden, Germany. Photo credit: hassler-made.com

A 25 m long swimming pool was built into the event arena – for a relay with German swim legends: Multiple Olympic champions Dr. Michael Gross and Dr. Roland Matthes and German swimming icon Franziska van Almsick , she is the vice chairman of the Sports Aid Board. Michael Gross participated with a broken upper arm – so he preferred to swim crawl instead of butterfly. Perhaps the pool also would have been too small for his 2,13 meters (6 ft 11) wingspan. Gross is 2,01 meters – 6 ft 7 tall. Michael Gross is one of the most successful German swimmers ever – he was born in 1964 and won gold medals at the 1984 Olympic Games in Los Angeles in the 100 m butterfly and 200 m freestyle and he also got the silver medal in the 200 m butterfly and the 4 x 200 m freestyle relay. Roland Matthes, born in 1950, competed for the German Democratic Republic and is the most successful backstroke swimmer of all time – he won both the 100 m and 200 m backstroke from 1967 to 1974 including the gold medals at the 1968 and 1972 Olympic Games and also all titles at European- and World Championships.
Franziska van Almsick, born in East-Berlin in 1978, won 18 gold medals at European Championships and 2 gold medals at World Championships in her career. She participated at the Olympic Games from 1992 to 2004 and won two silver medals in Barcelona in 1992 and two bronze medals. She also were able to win the silver medals four years later again in the 200 m freestyle and 4 x 100 m medley relay. Her best stroke always was freestyle, in 1992 she set a world record in the 50 m freestyle (SC). Van Almsick never won an Olympic gold medal but she always got a lot of attention in the German public and media because of her relaxed appearance and her outstanding successes in European swimming. Her coach was Norbert Warnatzsch – whose most famous swimmer is Britta Steffen. Franziska van Almsick retired in 2004.

“Fly albatross, fly” –  very famous cheer for the Olympic champion Michael Groß. Albatross was his nickname because of his wingspan. And butterfly his most successful stroke. Foto: Deutsche Sporthilfe/Herschelmann

Another highlight of the sports show was the performance of Thomas Lurz who is the most successful open water swimmer at World Championships where he won a total of 20 medals, 12 of them are golden ones and he won the silver medal at the 2012 Olympic Games in the 10 km and a bronze four years earlier at the 2008 Olympics. He competed from the 5 km up to the 25 km and in team competitions. He was supported at the Ball of Sports by other German  long-distance swimmers: Thore Bermel (bronze medalist at the European Games 2015) , Lea Boy (8th at the European Games 2015) , Britta Kamrau ( 4-time world champion in 2002, 2004 , 2007). They swam 25 kilometers in four hours and they collected money for a good cause. The company “Nordsee” donated 50 euros (56 USD) for each swum lane.

Albatross Michael Groß back in the pool, i never thought this could happen. He is a successful business man with his own company in germany and unfortunately avoids being in the water normally. Every german boy adored him in the 80s and we all startet to swim because we wanted to be like the albatross.
PS: Correction for this article, Franzi was born in 1978.

Thanks for the hint!

Yes, Michael Groß appearance was awesome … would be great to have him as an ambassador for German swimming at more events!