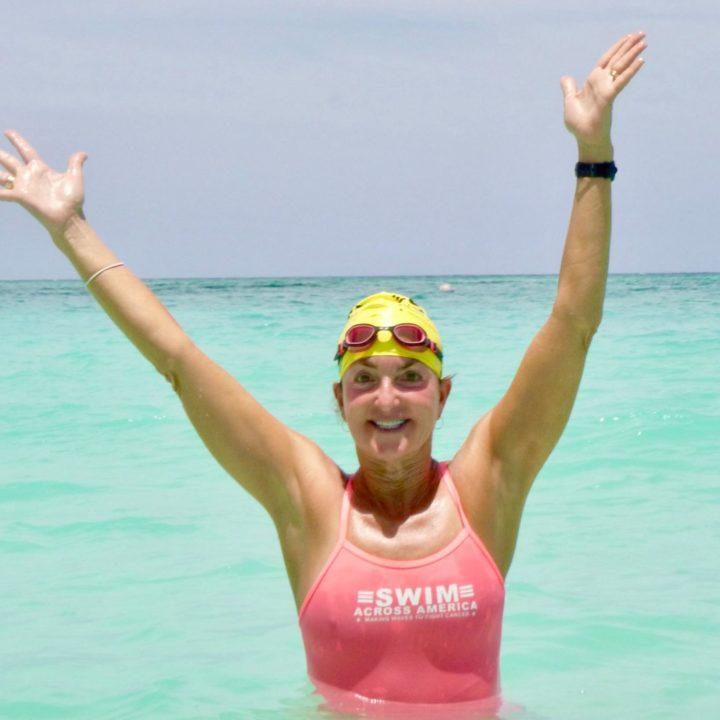 Susan Helmrich beat cancer 3 times. What has she to fear from 5 degree temperatures and a little bit of snow?

“Snow Swimming” has become a popular annual ritual. When the year’s first big snowfall hits, which it did in a big way for most of the American east coast last week, swimmers are called to validate their insanity and go for a dip in a much colder form of the water we so love. Suddenly, the 77 degree pools that feel so frigid when morning practice starts pale in comparison to the 32-degree-or-less snow banks, and yet we are called to them.

Usually, it’s for fun, for a distraction from brutal winter training, or to terrify (and sometimes amuse) our parents.

But when 62-year old Susan Helmrich took the plunge into the snow over the weekend – it was for a higher calling. Helmrich, a 3-time cancer survivor and former captain of the Syracuse University swim team, did it to raise money for Swim Across America.

As Helmrich explains in this video, she is a multiple-time survivor of cancer – a disease that has cost her her entire reproductive system, one lung, her gall bladder, her duodenum (which connects your stomach and small intestine), half of her pancreas, and everything from her liver was rerouted.

Helmrich was challenged by a friend, Robert McLaren, to jump in, then jump out, then jump back in – to the snow. If she did so, he promised to donate $500 to Swim Across America, which is a swimming-based organization that raises money for cancer research.

So she did it.

The temperature outside was 5 degrees Fahrenheit (though the pool in Rye Brook New York appeared considerably steamier).

And then he doubled down. Robert promised another $500 to Swim Across America if Helmrich could find a friend to repeat her feat.

So Susan grabbed her husband, and the two did a duet. Anohas agreed to donate her friend, Stephanie Middleton, also heeded the call, and so in total, McLaren has agreed to make a $1000 donation to SAA.

Helmrich is the race director for Swim Across America‘s annual San Francisco event. In 2017, she swam 669.29 miles, without her reproductive system, without a lung, without her gall bladder, without her duodenum, without half her pancreas, and with everything rerouted from her liver. For all that she didn’t have, what she does have is spirit, and fight, and the Heart of a Champion.

See videos of all 3 swims below.