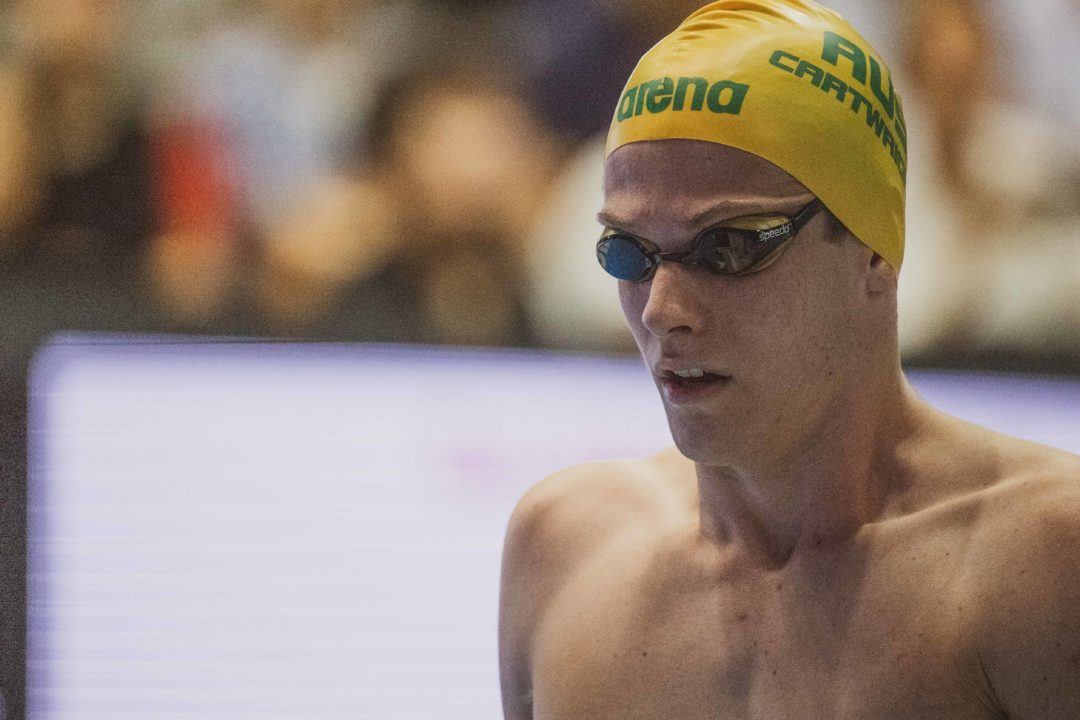 The final start lists for Australia’s World Championship Trials have been released, and, complete with a “no changes can now be made” warning at the top, there is a most peculiar entry for 20-year old Jack Cartwright.

That’s “entry” in the singular, because the St. Peters Western swimmer is entered in only a single event, the men’s 1500 free, where he’s the 9th seed with a 15:44.34. That time sits him 57 seconds away from top seed Jack McLoughlin, and even without an entry from Mack Horton, leaves him 45 seconds short of the qualifying standard for the World Championships.

What makes this singular entry so bizarre is that Cartwright, to this point of his career, has been a world-class sprinter. To be specific, he took a silver, behind only countrymate Kyle Chalmers and tied with the defending World Champion Caeleb Dressel, in the 100 free at last summer’s Pan Pac Championships. There he swam a 48.22 that was the 3rd-best time of his career. His best time was a 47.97 done in the semi-finals of the 2017 World Championships, when he was only 18, to qualify through to the final in 5th place; he would add a few tenths and finish 7th in the medal round.

All of his international medals to date have been over 100 or 200 meters, including a World Junior Championship in 2015 on the men’s 400 free relay.

In fact, Cartwright has only one result in the 1500 free, in long course or short course, in his career according to Swimming Australia’s official database. That’s the 15:44.34 that he’s seeded with, which was swum at December’s Queensland Long Course Championships.

Cartwright was absent from April’s Australian Swimming Championships, and registers no results in Australia’s official database in 2019. He did, however, sign an endorsement deal with FINIS just before those Australian Championships.

We’ve reached out to Cartwright to ask about his sudden shift in focus, but as of posting have not received a response.

Very strange story! Any Aussies in the know know what is going on here?

This is an error according to his coach and will be sorted in coming days.

I asked his coach

Lol, I love this site

27
0
Reply
Markster
Reply to  Swimmer A

its even stranger when you consider that Cartwright said a while back that he didn’t like training for the 200 and only did it for the relay spot. Why then would he extend to the 1500?