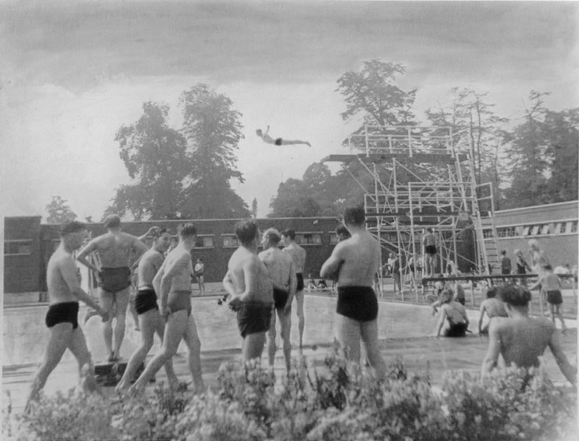 The 50-meter Brockwell Lido in London, opened in 1937. Sponsors hoped Brockwell might be chosen for the Olympics, but the next two Games were canceled by war. Archive photo via Howard Means

This article is Part 5 of a six-part series adaptation from the book SPLASH! 10,000 Years of Swimming, written by Howard Means and published by Hachette Books.

A 1900 survey tallied 67 public pools in the United States, one for every 1.14-million Americans, but swimming was on the edge of a boom such as few recreational activities have ever experienced. By 1927, the number of pools had grown almost 500-fold, to over 3,200, and a national panel of health experts had declared swimming and diving the highest-rated sports “on the basis of their contribution to physical and organic growth, traits and qualities of good citizenship, social and moral ideals, psychological development, and skill for self-protection and aid to others.” Then as now, though, those benefits were not spread anywhere near evenly across the population. While white Americans were diving in in ever-greater numbers, African- and Indigenous Americans were unlearning to swim over multiple generations, with too often tragic results.

Swimming Together: The pools built in the 1920s and ‘30s were often massive community facilities. Above, the Fleishhacker Pool in San Francisco, opened in 1925, with a 10,000-swimmer capacity; at right, Berlin’s 1930 glass-enclosed Stadtbad Mitte; below, the 50-meter long Brockwell Lido in London, opened in 1937. Sponsors hoped Brockwell might be chosen as an Olympic venue, but the next two Olympiads were canceled by war.

Swimming at Home: The housing provisions of the post-World War 2 GI Bill helped create the American suburbs, and the quick-dry gunite used to repair bombed runways during the war enabled the amoeba-shaped pools that brought swimming to the American backyard. Meanwhile, the massive urban pools fell into disuse, lost their political constituency, and were mostly abandoned.

Swimming Alone: a contemporary indoor resistance pool — with room for only one. Perfect for a pandemic.

Municipal pool, Washington, DC, 1942. Almost one in three Washingtonians were of African-American descent by the start of World War 2. All these municipal swimmers are white.

Simone Manuel and Canada’s Penny Oleksiak embrace after tying for the gold medal in the 100-meter freestyle in 2016, at the Rio Olympics — the first swimming gold ever for an African-American woman. “Sometimes, I feel like I’m alone on an island,” Manuel would later write. “Reporters ask me questions that other swimmers, white swimmers, are never asked…. I’m not the voice of Black America.”

More From This Series

Choose a stroke and get paddling through the human history of swimming!

From man’s first recorded dip into what’s now the driest spot on earth to the splashing, sparkling pool party in your backyard, humans have been getting wet for 10,000 years. And for most of modern history, swimming has caused a ripple that touches us all–the heroes and the ordinary folk; the real and the mythic.

Splash! dives into Egypt, winds through ancient Greece and Rome, flows mostly underground through the Dark and Middle Ages (at least in Europe), and then reemerges in the wake of the Renaissance before taking its final lap at today’s Olympic games. Along the way, it kicks away the idea that swimming is just about moving through water, about speed or great feats of aquatic endurance, and shows you how much more it can be. Its history offers a multi-tiered tour through religion, fashion, architecture, sanitation and public health, colonialism, segregation and integration, sexism, sexiness, guts, glory, and much, much more.

Unique and compelling, Splash! sweeps across the whole of humankind’s swimming history–and just like jumping into a pool on a hot summer’s day, it has fun along the way.

It’s at my bed. Great work by a lovely man.

Ordered a copy yesterday! I’m looking forward to reading it.