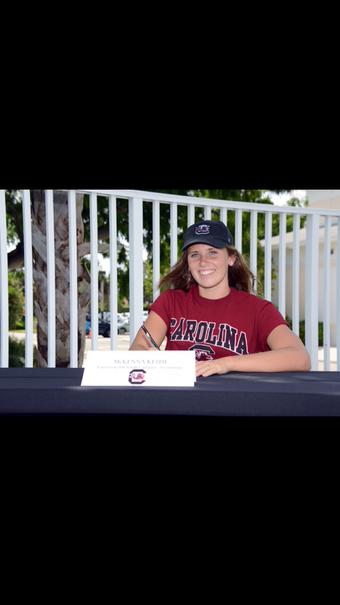 Saint Andrews School’s McKenna Keith has committed to swim for South Carolina for the 2015-2016 season. Keith, a Florida native, has... Current photo via McKenna Keith

Saint Andrews School’s McKenna Keith has committed to swim for South Carolina for the 2015-2016 season.

Keith’s take on her signing:

“I instantly fell in love with the school, swim program and coaching staff at South Carolina, and it is a perfect match for me academically and athletically. I can’t wait to be a Gamecock next year!”

USC is an incredibly young team, but their underclassman ranks hold a ton of talent. Their individual scorers at SECs were almost exclusively freshmen or sophomores, and half of the top times on the season for the Gamecock women were owned by freshmen. To further illustrate the impact that underclassmen had on USC’s women’s team, only one of five relays, the 200 free relay, had a senior on it, and each of the five relays included at least two underclassmen.

That 200 free relay may be Keith’s best bet at contributing at the conference championship level as a freshman. Graduating from last year’s relay, which placed 11th of 12 teams at SECs, is Rachel Elliott. She led off with a 23.25 in finals. Elliott was 2nd on USC’s top times list in the 50 free and 3rd in the 100; Keith should help soften the blow of her graduation.

Keith will join a small (but mighty) incoming class for the South Carolina women, which is currently made up of two Davis Arden Racing Team (DART) teammates, Emma Barksdale and Paige Maynard. These freshmen should help a young team led by rising sophomore and NCAA qualifier Meredith Vay continue to build talent as they try to move up the ranks of the elite SEC.

The SEC will soon see a new dominant player. USC will be mentioned with Auburn, Florida and Tennesse in the next 3 years. Their coaches are among the best no…

“USC” (I think we all know that South Carolina will never own that moniker) has one coach who is in his late 60’s and was somehow forced out of a job he had for 35 years under auspicious circumstances after absolutely dominating his conference; and another coach who is not very good, has never proven himself, and who I haven’t heard very pleasant things about.

Takes a lot more than a few milers (albeit very good milers) to crack the likes of Florida and Auburn.

Please don’t run your mouth about things you know nothing about. I’m a Gamecock swimmer and you obviously have never met any of our coaches. You can choose to look at them how you want but among our coaches I find an up and coming head coach who led his team to its highest place in nearly two decades last year, a seasoned veteran with numerous ACC titles under his belt (with an incredible resume beyond that), a former American record holder, and one who coached Josh Schneider to an NCAA title. A lot of people were surprised how well we did last year when they should have seen it coming. Like this article points out, most of our scorers… Read more »

First off, Auburn is fading fast in the SEC and NCAA but I not near fast enough for USC to catch them in the next 5 years.

Secondly, it’s amazing this staff has had so long to remain mediocre, sure they break a school record or two each year but they lose points every year in the SEC race.

Third, when’s the last time USC has had a woman score in swimming at NCAA’s? 2012? And the last time they even had a swimming representative at the meet? 2013?

Not great in either regard.

I’m glad you are excited to have your daughter attend a great school but sorry that you were sold false hope.

Obviously, you have not done your research. Only the head coach has worked with the team for more than three and a half years, not exactly “so long.” And if by a record or two, you mean ten, I would be more inclined to agree with you.

It appears that you are unaware that Meredith Vay swam at NCAAs for the Gamecocks this year. And with the incoming class, she will be joined by several others next year.

Every parent who sends their child to school for athletics tends to inflate the school’s resume and/or prospective future a little, but regardless, he has more, or at least more recent, experience with the Gamecocks than you do

My next post within the next three years will be “I told you so”.