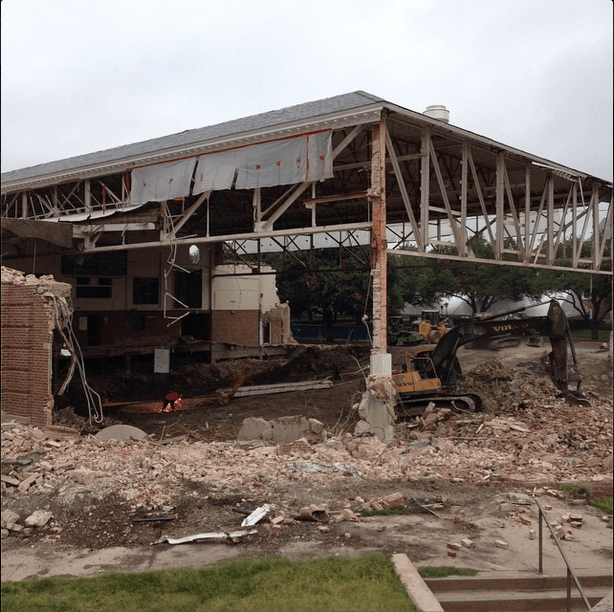 SMU's Nicole Parmenter, a transfer from Cal, walked by the Perkins Natatorium today, and instagrammed the above picture of its demise. Current photo via Nicole Parmenter

September, 2014 is the end of an era in historic pools. Later this month, the Belmont Plaza Olympic Pool will be taken down, and this week, SMU has begun the demolition of its legendary Perkins Natatorium.

Upon first entry to the Perkins Natatorium, one was never really sure how to process. It’s three-sided bleacher style seating made it reminiscent of an old basketball arena – because that’s exactly what it was. With only 6 lanes, just a few feet deep on one end, and divers and swimmers having to compete for that same limited space, it hardly seemed a pool worthy of the level of success that this SMU program has achieved in it.

But then, if you looked up at the record board, and saw the names on it, your whole perspective changed. Clary, Crocker, Morozov, Thoman, Peirsol, Cromwell, Klueh, Ervin, Hansen…the list could be the most impressive pool record board in the sport.

But after the band hall moved out of the facility’s lower level last month, and the 50 meter Barr Outdoor Pool behind the old building full of Mustangs, the 12th hour has arrived, and Perkins will be gone.

As time marches on, SMU still has not announced formal plans for their new permanent facility, but the team marches on, with their annual red and blue intrasquad meet being held on September 19th.

SMU, for now, will host most of their intercollegiate meets off campus. The SMU Classic will be held at the brand new Lewisville ISD Natatorium, and later meets will be at the Rockwall Aquatic Center, the Southlake Natatorium, and the Mansfield Natatorium – fortunately, the Dallas area has no dearth of fantastic pools to hold the Mustangs over until they complete their long-term solution.

For now, we say goodbye to the legendary Joe Perkins Nat. She was gem buried inside the rock that never got quite the respect she deserved, but all who entered and raced there knew her luster.

I used to love to go see the Swimming Classic there. Great atmosphere with the fans packing the place on those nights. I swam there once in college. I loved the place cause it was just so unique. Nothing like it.

Is the team going to train at the Dedman Center?

It’s devastating that current freshman, Grayson Magruder will never be able to competitively swim under the red and blue of the SMU Mustangs in this pool. This is a majestic pool and I thought he could’ve written his own chapter in the book of SMU Mustang swimming at this fine facility. Hopefully the SMU athletic department can go above and beyond in replacing this pool and they return to their former Ponying up

Raced there three years at the SMU Classic. Many memories of swimming in a great and historic pool, with one of the greatest competition environments I’ve ever been a part of. It will be missed.

So, where is the SMU team going to train when the weather gets cold? I saw the Perkins pool once, it was unique…..

I raced there but didn’t win there. Doesn’t hold the same luster when you lose…big time.