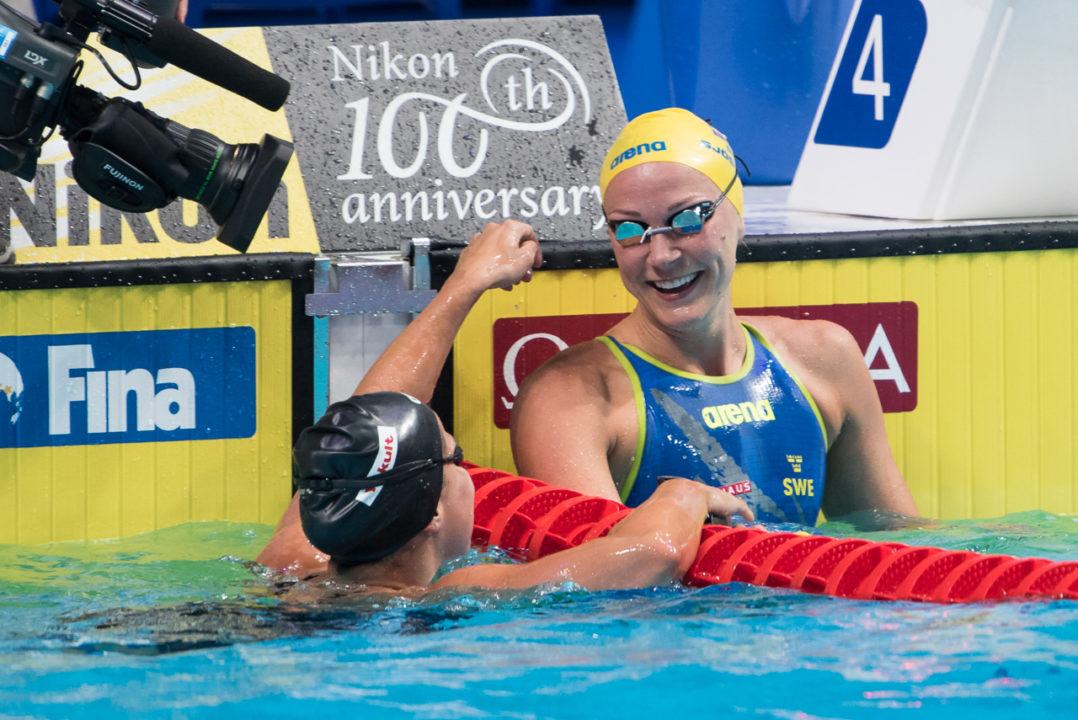 Sarah Sjostrom won her third gold of the week in the women's 50 free, swimming the 2nd fastest time in history. Current photo via Peter Sukenik/www.petersukenik.com

The women’s 50 free final was the fastest in history, with all three medalists incredibly under 24 seconds, and 4th place in at 24.00. Last summer in Rio, the gold medal was won in 24.07.

Sweden’s Sarah Sjostrom broke the eight-year-old world record in the semis in 23.67, and came within two one-hundredths tonight to win gold and post the 2nd fastest swim in history in 23.69. She now owns three of the fastest seven swims in history.

Sjostrom now has three golds and one silver here in Budapest, with another chance tonight in the women’s medley relay.

Ranomi Kromowidjojo, the 2012 Olympic champion, finally cracked the 24-second barrier tonight and claimed that 2009 Dutch record from Marleen Veldhuis (23.96) in a time of 23.85. Her swim ties one of Sjostrom’s swims for 6th fastest in history, and jumps her up to 4th fastest performer of all-time. She now trails only Sjostrom, Britta Steffen (23.73) and Cate Campbell (23.84).

Behind them, Simone Manuel became the first American under 24 seconds in 23.97, and reigning Olympic champion Pernille Blume set a new Danish record in 24.00, settling for 4th. Manuel moves into a tie for 8th all-time, and Blume now sits 10th.

SS AT THE TREBLE!!! 3 GOLDS AND A SILVER…WORLD RECORDS AND ALL TIME LIST SWIMS. …TAKE A BOW!! YOU are a Superstar of the sport!! 4 women at 24secs and lower!!!?? 5pm sprinting has gone stellar…mental…fantastic!! The 100m is set to be a rip roarer with the thelp Aussie sisters chomping at the bit to fight back!! Sarah, again, fantastic!! A word too on Blume: this event reminds me of the women’s 100m Hurdles at present: surely contenders as the hardest event to medal in: 4th placers could easily be Champs!!!