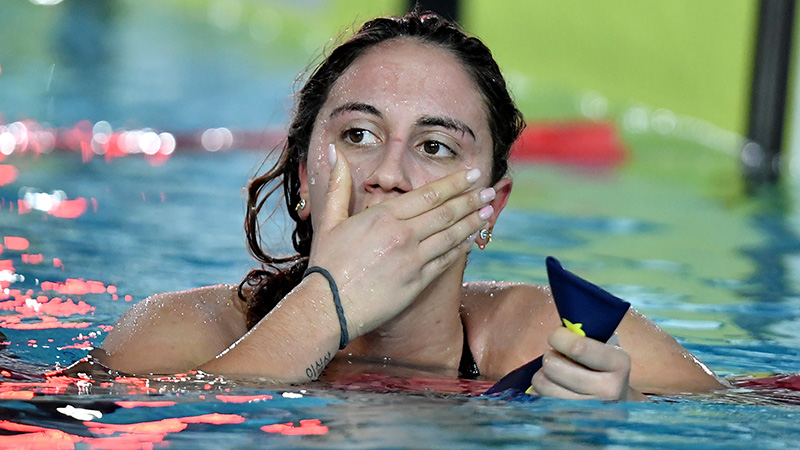 18-year-old Tunisian Ahmed Hafnaoui won Africa’s first medal in the men’s 400 freestyle with an upset gold over a veteran field.

Kalisz Takes 400 IM Gold, But About Those Final Times

The Americans went 1-2 in the en’s 400m IM here in Tokyo, led by Chase Kalisz and then Jay Litherland. But what happened with the times?

Simona Quadarella, the defending World Champion in the women’s 1500 free in long course, has broken the Italian Record in the 1500 free in short course.

The runner-up in Friday’s race, Martina Rita Caramignoli, finished in a time of 15:36.43, which itself almost caught the former record.

Quadarella became pre-qualified for the Italian team to the Tokyo Olympics when she swam a 15:57.18 at the Italian Winter Championships in 2019, before the pandemic hit. That came after winning the World Championship when American Katie Ledecky became sick during the meet and scratched the event where she’s both the World Record holder and far ahead of anybody else in history.

Ledecky would bounce back to win gold in the 800 free, but the Quadarella battled her there as well. The Italian finished second in 8:14.99 behind Ledecky’s 8:13.58.

Global records in the women’s 1500 free are a little soft globally for a few reasons. The race has only recently become an Olympic event, which has resulted in it not being swum in many major international competitions – even those that offer other non-Olympic events – like the International Swimming League and the European Short Course Championships.

But the race is beginning to get more attention now that it is scheduled for an Olympic debut in Tokyo in 2021.

I want to see those world records getting crushed.