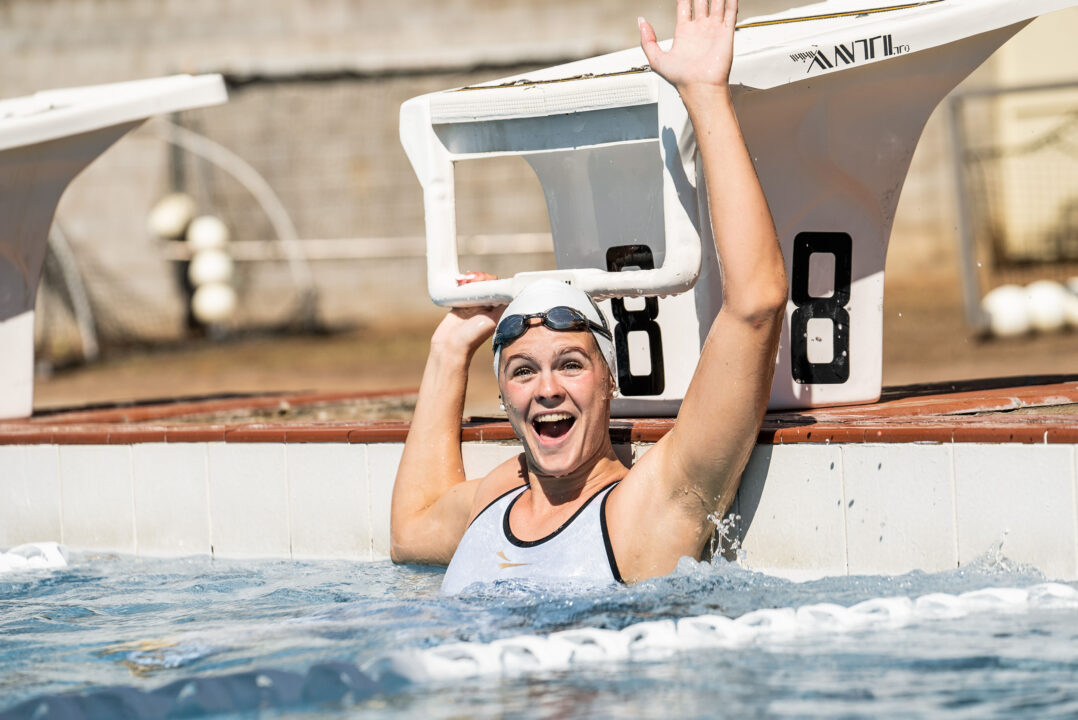 Australian swimmer Shayna Jack, currently #2 in the world in the 100 free, is working on an accelerated timeline with the Commonwealth Games a month away. Archive photo via FINIS

Not only did Cooper break the Queensland allcomers record, but he also shattered Ben Treffers’ Aussie age group record for the 18 year old category.

Jack posted a video on her Instagram channel on Wednesday working out in the gym in preparation for the upcoming Commonwealth Games. The video includes Jack doing squats, a range of core workouts, and even upper body strength exercises with the help of a modified band that allows her to move weight without the use of her injured hand.

American orthopedists Dr. Ather Mirza and Dr. Justin Mirzasay that metacarpal fractures, without complications, usually take 6 to 8 weeks to fully heal, including wearing a splint for the first three of those weeks.

But Jack has to work on an accelerated timeline with swimming at her next major meet, the 2022 Commonwealth Games, scheduled to begin in a month on July 29.

Jack fractured her 4th metacarpal (hand bone) earlier this week in the training pool at the World Championships in Barcelona in what is being called a “freak accident.”

Jack was swimming into the wall in the warmup pool when the swimmer in front of her turned and pushed off. Jack’s finger was caught in the other swimmer’s suit, pulling her finger back.

The break has been described as a ‘clean break,’ meaning a more straightforward surgery and recovery.

The surgery was done at St. Andrews War Memorial Hospital in Queensland. Jack says that she plans to rejoin the Australian team in Chartres, France on July 15 for final preparations for the Commonwealth Games. The Commonwealth Games begin on July 28 in Birmingham, England.

The 2022 World Championships were Jack’s return to the international stage after a 24-month anti-doping suspension. Jack tested positive for the banned anabolic agent Ligandrol and was initially suspended for four years. Upon appeal, she successfully convinced arbiters that she did not ingest the substance intentionally, and had that suspension reduced to two years.

Australia will be favored to sweep the women’s (and mixed) relays at the Commonwealth Games with or without Jack. The country is the current World Record holders in the 400 free relay, set at last year’s Olympics on a relay that didn’t include Jack or O’Callaghan, who are currently the top two in the world this year.