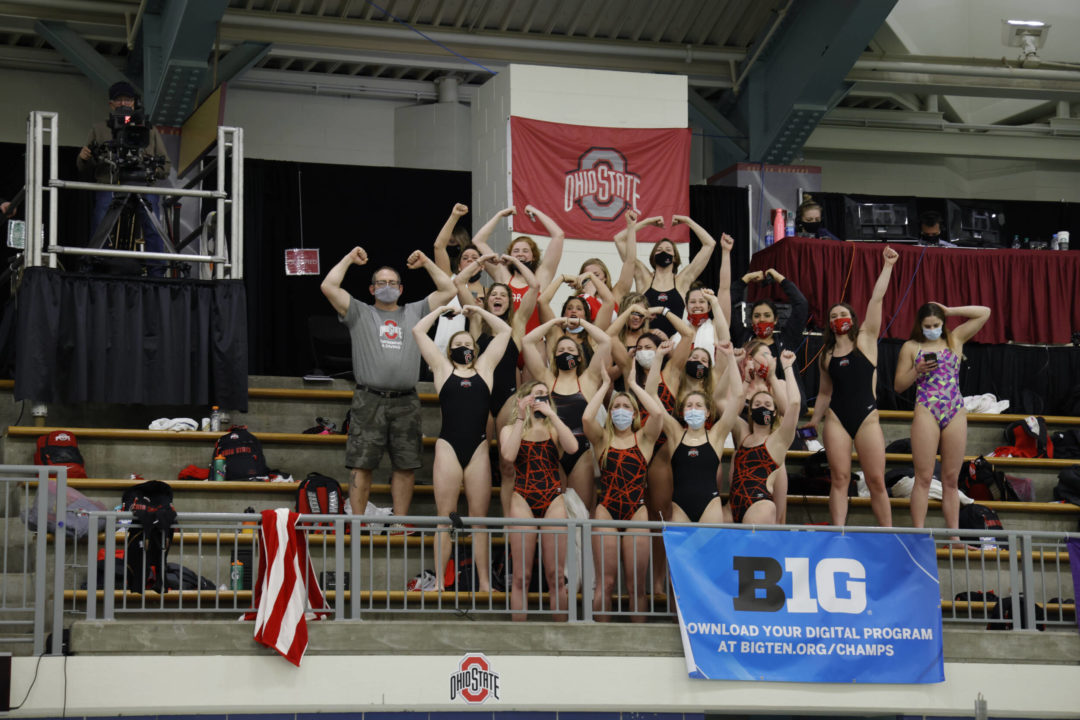 We’re just 1 day in at the 2021 NCAA Women’s Swimming & Diving Championships, but it’s been two years since we’ve gotten to do this, so let’s overreact.

While the first day of racing went largely to seed, there were three teams that especially stood out.

On the positive end were the Ohio State Buckeyes, which had the biggest drop of the field when they cut 2.97 seconds off their seed time.

The Buckeyes are the two-time defending Big Ten Champions, and one of the biggest unanswered questions by the premature end to last season’s championship was whether or not they could carry that through to NCAAs. The team dropped big time at Big Tens, which is sometimes a bad omen at NCAAs.

They proved this year, at least, they’re ready to rock. They still don’t have enough weapons to contend for the team title, but this lifts their ceiling into top 5 contenders for the meet, if they can keep this momentum rolling. They were just 3rd in this relay at Big Tens, but they beat both Big Ten rivals from Michigan (10th) and Indiana (11th) on Wednesday.

None of those were monster legs for Ohio State, but the consistent across-the-board improvement is exciting for them.

On the downside, Tennessee and NC State both struggled and fell well off seed.

Holding seed has been a consistent problem for Tennessee at this meet. Their -51 scoring vs. seed average over the last three championships is second-worst in the NCAA, ahead of only USC (-51.5).

For NC State, the story is a little different. They pulled both Katharine Berkoff and Kylee Alons, their two fastest legs from their runner-up ACC relay, from this 800. They were replaced by freshman Abby Arens, who split 1:46.60, and junior Emma Muzzy, who split 1:48.01 (the slowest split of the field).

So it wasn’t a great day for the Wolfpack, but with stars Alons and Berkoff still to swim, and both holding high seeds in the 50 free on Thursday morning, the Wolfpack have an opportunity to recapture momentum on day 2.

As far as ‘the big battle’ goes, for the title, there’s nothing to indicate that anybody is going to challenge Virginia’s 100 point psych sheet (swimming only) scoring. They won the relay and were almost 2 seconds better than ACCs without using Kate Douglass, while Cal and Texas each dropped a spot, thanks in part to a good swim by Kentucky, and for Cal, in part because they were slower than seed. Cal didn’t use Izzy Ivey, though, so they’ll still be happy with that 3rd-place finish without their star.

For Texas, dropping 1.2 seconds off their season-best is a positive sign, though it didn’t result in more points. They’ll still need a gigantic diving performance to get back in this meet.

Good analysis. Wisconsin and Alabama did themselves well tonight.

NC State had a valid reason for dropping points with the change of athletes. The girl VOLS continue the trend of losing points from seed positions (-10 after day 1). This team and coaches really need to figure out how to maintain fitness after the conference meet. The best swimmers and their families want to have their best meet at NCAAs! Great start UVA, UK ad OSU.

Tennessee tapered for duel meets and its showing

Tennessee and most of the SEC do at least a partial taper for SEC’s. A double taper this close together is difficult at best. Just the way it is.

Kate Moore for NC STATE was actually 1.1 seconds faster than ACCs, not slower.

The Buckeyes coming in with a great start! Keep it going ladies…you got this!!

Bama continues its SEC meet trend of setting new school records at an amazing clip, with another record in the 800 Free Relay! Let’s go!!