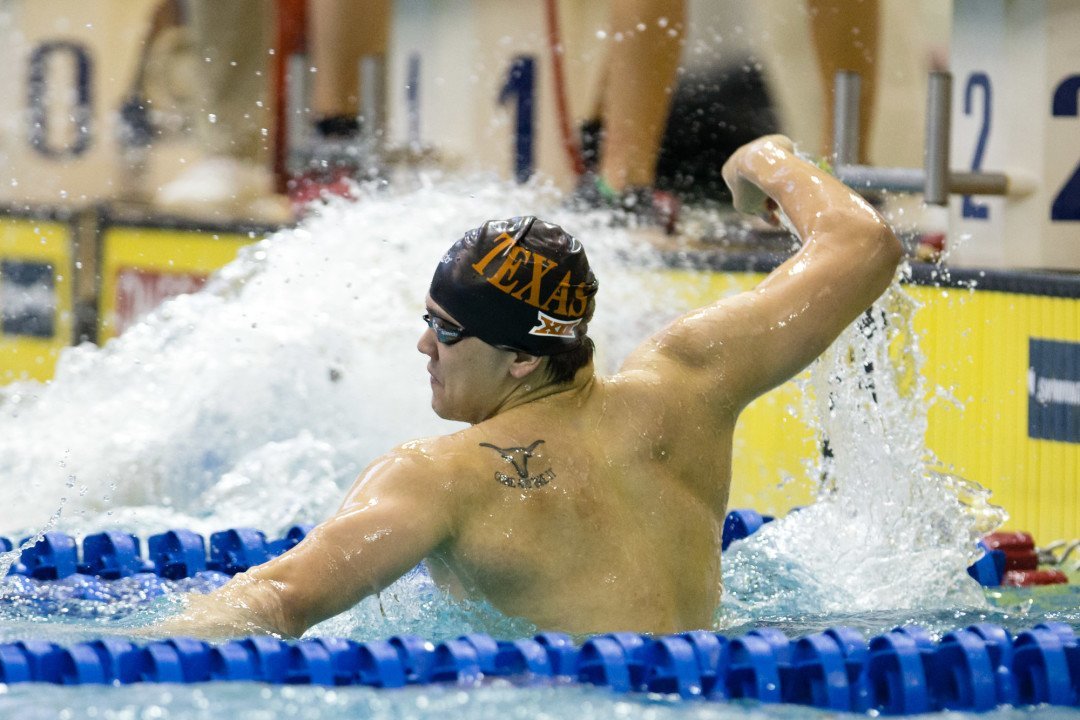 Schooling shot off the blocks, securing gold in a blazing 18.76. With that, he took down Jimmy Feigen's former Big 12 Conference Record of 18.84 in the event. Archive photo via Tim Binning/TheSwimPictures.com

Texas standout Joseph Schooling stepped up to the plate for a loaded 50 free final on night 2 of the 2017 Big 12 Swimming and Diving Championships in Austin, Texas. The Singaporean Olympic champ took on a field that included All-American teammates Jack Conger, Brett Ringgold, and Tate Jackson.

Schooling shot off the blocks, securing gold in a blazing 18.76. With that, he took down Jimmy Feigen‘s former Big 12 Conference Record of 18.84 in the event, which was set back in 2009. He also took down the former Meet Record, which stood at a 19.18 done by Ian Crocker in 2004. Schooling tied that mark this morning, but is now sole owner of the Meet Record after putting up his first sub-19 swim.

Schooling is now tied with Simonas Bilis as the 10th fastest performer of all time in the event.

Teammates Conger and Ringgold battled closely for the silver, with Conger getting his hand on the wall in 19.27 to Ringgold’s 19.29. That was just 7 hundredths shy of Conger’s lifetime best 19.20 from this morning’s preliminary heats.

That’s the first swimmer Texas has had go under :19. Jimmy Feigen is the only other. Go Horns!

Feigen actually had the 9 fastest times in Texas history in the event before today.

If Feigen is the only other, how is Schooling the first? Need to work on those sabermetrics.