Olympic champion and World Record holder Sarah Sjostrom shared with us her favorite swimming memory. She also discusses the legacy that she thinks she will leave to world of swimming. Current photo via Jack Spitser/Spitser Photography

At the 2016 Rio Olympics, Sarah Sjostrom won the gold medal and broke the World Record in women’s 100m butterfly with a time of  55.48. She was the first woman from Sweden to win an Olympic gold medal. One year later, at the FINA World Aquatics Championship in Budapest, she set another two world records that are still standing, in the women’s 50 free and 100 free with times of 23.67 and 51.71, respectively.

The gold medal in the women’s 100-meter butterfly in 2016 Rio de Janeiro Olympics is one of the favorite memories in her career.

“I’m very proud of how I handled the Olympic final in 100m butterfly. I had a lot of pressure on me. In my mind the only thing I could think of was like ‘Ok, this your moment to win a gold medal at the Olympics. If I don’t win now, probably never win”.

She’s also very proud of her world Record in 50m butterfly. Sjostrom set that World Record in 24.43 during the 2014 Sweden National Championship.

You can watch the full interview below:

My favourite swimmer in the world. Always baffled by the fact that she only has one Olympic gold.

Put her in US or Australia team, she’d have won a dozen golds.

Also, since Sweden team is very shallow, she had to swim prelims (as well as finals) of all relays, whose effect you saw in Rio when she was spent by her final event, 50 free, where she didn’t even advance to final.

She has been on top of the world since 2009 with no signs of slowing. The devastating injury she sustained last year would have called it a career for many a swimmer, but for Sarah, it only confirmed how hungry she still was after winning everything there is to win, and against all odds, she eked out an individual Olympic silver just months later. Sarah Sjöstrom is the closest thing swimming has to a true-blue superhero.

Honestly it’s amazing no one has been able to replicate that kind of sprint fly stroke. No one has even come close

Her world record is next level. She could have won US Trials in the 50 free swimming butterfly. 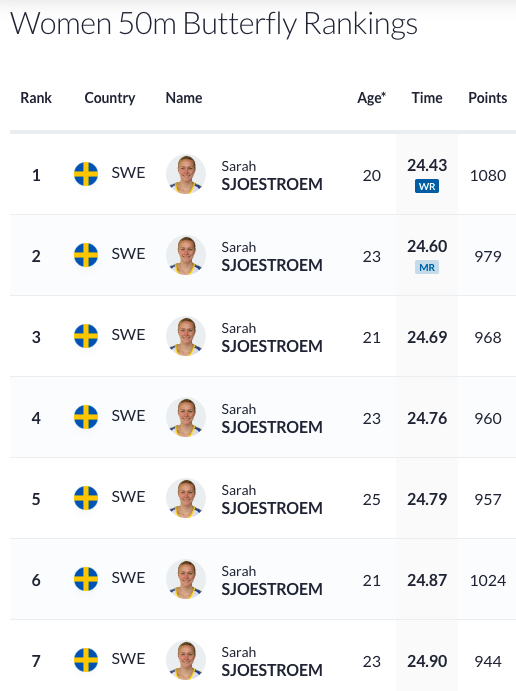