Ryan Murphy: The Power of Routines (and Being Able to Roll with the Punches) 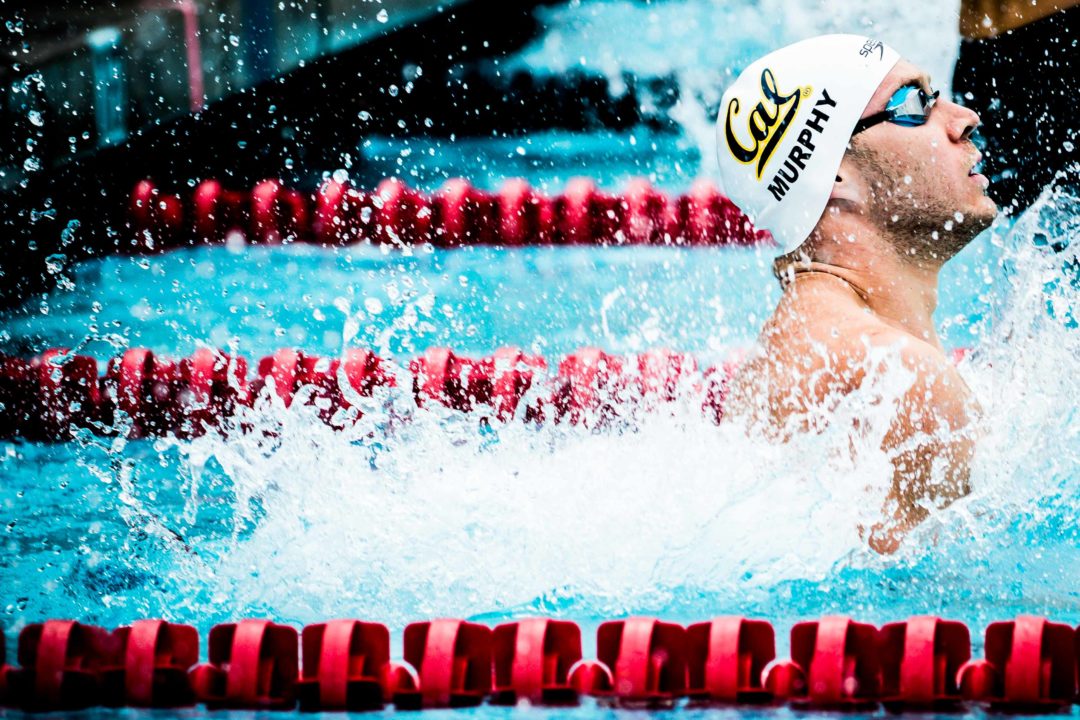 Despite our best intentions, things don't always go according to plan. Here's a champion's take on rolling with the punches at the biggest meet of his life. Current photo via Jack Spitser/Spitser Photography

Kieren Perkins was the dominant distance swimmer of the 1990s. Here’s the legend’s advice on how swimmers can get mentally tough.

Dana Vollmer: Stay Calm in the Storm by Finding Your Anchor

The pressure of competitive is very real. Here’s one Olympian’s advice on how to manage the stress and anxiety of racing.

How did the greatest swimmer in history prepare on the day of his biggest performances? Here is what you can learn from Michael Phelps’ full race day routine.

Tom Dolan battled through exercise-induced asthma and a narrow windpipe to become one of the greatest IM specialists in history.

7 Tips for Improving Your Freestyle Technique

The American men have long dominated the backstroke events on the Olympic stage.

In recent years, this has been particularly evident. They’ve planted the flag at the top of the podium in both 100m and 200m backstrokes at every Olympics since 1996, with legends like Jeff Rouse, Lenny Krayzelburg, Aaron Piersol, Ryan Lochte, Tyler Clary and Matt Grevers taking turns collecting gold.

At the 2016 Rio Olympics, the mantle was about to be passed to University of California standout Ryan Murphy.

There was only one problem.

His race-day preparations for the final of the 100m backstroke had been disrupted by an unannounced drug test. Two drug testers had shown up at his room, banging on the door until Murphy, wiping the sleep out of his eyes, opened the door in his compression shorts. Instead of taking his planned rest, he was being led all over the Olympic village hours before his race.

“We wandered the village as they made one wrong turn after another. My stress level was rising. Why now? Why today?” recalled Murphy in a piece he penned for the Players Tribune.

By the time they made it to the drug testing center, Murphy was irritated, frustrated.

The day had been set-up to follow his usual routine. A routine that he’d leaned on for “as long as I can remember, one that works me.”

He was going to get some shut-eye and rest up in his room. Eat some peanut butter and jam. Head over to the aquatic center with plenty of time to spare so that he could go through his usual stretch and warm-up routine.

And now he was standing at the testing facility, feeling like things were getting away from him. In that moment, his coach, Dave Durden, sent him a timely text.

“Ryan, don’t worry about your plan right now. We can adjust. Just take care of one thing at a time.”

“Everybody has a plan until they get punched in the mouth.”

As we approach the big meet, we are following a series of plans that have been carefully laid out in front of us.

The periodization plan takes us through the different cycles and phases of training. We hit the volume hard during the holiday training camp. Ease off and sharpen our speed in the weeks leading up to competition. The strength training plan we follow in the gym is designed purposefully. The technique work we do is targeted for our individual needs. Our nutrition is centered around what we need to perform well and stay healthy.

Each step of the way, we are following carefully-detailed plans.

By the time we get to the meet, we are unfurling another plan: our race day routines and rituals. These plans are particularly important, as they are designed to safeguard us from getting too anxious and stressed in the pressure-cooker environment of a swim meet. We depend on these plans to give us a measure of stability and control in the emotional turbulence of competition.

But plans are not guaranteed.

Our best intentions and plans are rarely immune to a bad swim, losing our best race, or having a couple people jolt you from your pre-race rest so that you can go pee in a cup.

For Ryan Murphy, this included getting his Z’s, eating his PB&J, and heading to the pool early.

But as Murphy learned that day, no matter how intricately and detailed our plans, they are always at risk of being thwarted by the environment and life.

Does that mean we should abandon our plans altogether? No, not at all. Plans serve a purpose. Despite the ability to have them rail-roaded at the last moment, they give you a  sense of stillness that helps keep your mind calm and clear on race day.

But where we screw up with our plans is making them too rigid, dependent on others, or viewing them as critical for our success.

Here’s how to better plan for success both in practice and on race day.

It’s a well-worn cliché, but well earned—expect the unexpected. It would be nice if our race day unfolded exactly the way we wanted, but this isn’t realistic.

When you go in expecting it to be messy and challenging, then you are better mentally equipped for adverse circumstances when they happen.

Have basic contingencies for the important stuff.

Continuing with the example of warming up, let’s say you have your typical meet warm-up that you have been using for years. You’ve done it countless times, you know it by heart, and you know it works.

But what happens when you go to a local meet at a small pool that has no warm-up pool? Or you have to wait three hours for your race?

Have an activation and warm-up routine for that scenario. Arms wings in the shower. Doing some fast reps on a pair of stretch cords. Some push ups and jump squats to wake up your fast twitch muscles.

Keep your plans and routines simple to avoid disruption.

The more specific and detailed your plans, the more likely they are to get side-swiped by an errant breaststroke kick.

Simplicity and a touch of vagueness helps: Go down behind the blocks ten minutes before my heat. Give six 50s a rip at the end of my warm-up. Lay down and close my eyes between sessions.

Your plans should be process-focused and not result-focused.

These are funnish goals, but again, they are just begging to be disrupted or flat-out squashed. For starters, those goals are only partly in your control.

But you know what is in your control?

The process you do to accomplish these things. Do my warm-up properly. Visualize the race I want to have. Focus on my performance cues during my race.

Take a big breath and take things one at a time.

Adversity has a funny way of FedEx’ing our thoughts into the future. Something bad happens in the present, and we instantly start thinking about all the bad stuff that is going to happen in the future.

It’s impressive how quickly our brain can conjure up a stack of awful outcomes when a little adversity comes our way.

Which means you need to stay present with what you are doing. Be in the moment and deal with the thing that is in front of you.

As his coach told Murphy that day in Rio, take it one thing at a time. Slow things down if you have to, but when things get hectic don’t rush or time-travel forward with your thoughts.

Prepare for adversity by chasing it each day.

Bob Bowman, Michael Phelps’ longtime coach, had him swim in practice with goggles that were Sharpie’d over so that he would get used to swimming without them in the event his goggles filled up with water in competition (spoiler alert, they did—Beijing, 200m butterfly final).

Swimmers make the mistake of avoiding hard stuff and uncomfortable situations in practice because it means they are risking looking silly or stupid. This is the curse of the perfectionist swimmer—they have big goals, but they don’t want to look stupid, weak or silly in the pursuit of them.

You learn to deal with adversity in practice, so that when you face in competition it doesn’t bury you.

It’s rarely the adversity that does us in. It’s the way that we react to it that causes our performance to sink.

Avoid the urge to go full-blown “woe is me.”

Things can feel unfair, right? You work out so hard for so long, only to come up against something you deem to be unfair.

But the odds are that if it sucks for you, it’s going to suck for everyone else, too. Full warm-up pool? That means your competition isn’t getting their planned warm-up either.

The truth is that most of the swimmers with you at finals have done the same training, done the same hard work, and have generally the same talent/ability. The main difference at this point becomes how well can you bring it mentally.

Alrighty, let’s head back to Rio.

How’d Murphy do that night?

For the final of the 100m backstroke Murphy has lane four. His underwaters give him an early edge that he doesn’t give up, leading all the way to take gold in a time of 51.97. His time is just a sliver over Aaron Piersol’s super-suit record of 51.94.

On the final night of competition, after Murphy had also clinched the 200m backstroke title, fully cementing the continuation of the American backstroke legacy, he would have another chance at gold and the world record by leading off the Americans’ 4x100m medley relay.

Murphy didn’t mess around, taking off to a massive body length advantage. When he throws his arm back and surges into the wall, he has done so in a new world record of 51.85.

As a young boy Murphy had written a letter to his parents.

“I hope my swimming life continues and I become an Olympian when I grow up. I hope I will break the world records. I want to be the best swimmer in the world. THE END!!”

The plan had worked out, even if it hadn’t been exactly as planned.

What an engaging, instructive piece, for swimmers and “retired” swimmers alike!

Great stuff Oliver- love your book keep it up!

Everyone has a “plan” until they get smashed in the face.