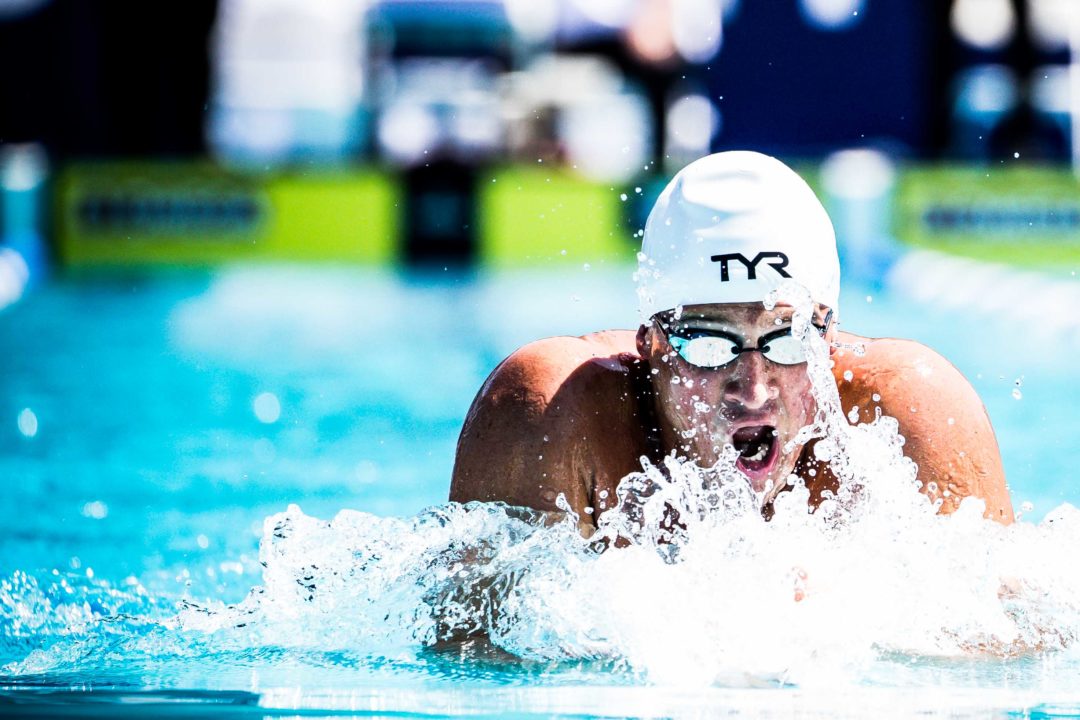 Lochte claimed victory in the 100 backstroke and 200IM, posting a 1:43.48 in the latter, and finishing with a 4 second lead over the rest of the field. Archive photo via Jack Spitser/Spitser Photography

Day 2 of the Sarasota, Florida Championships saw record-breaking performances and multiple lifetime bests, those of which that were posted by 18&Under swimmers will count toward USA Swimming’s 18&Under Winter Championships.

Olympic medalist Ryan Lochte started off the finals session with a victory in the 100 back, touching the wall 1st at 47.65 and getting half a second closer to his lifetime best, 44.60, than he was this morning. 18-year-old Hayden Kwan of United Swim Club and Lochte were neck-and-neck at the halfway point, splitting 23.49 and 23.45, respectively. Kwan finished the race in 2nd place with a best time of 47.99, shaving .32 seconds off of his previous best from July.

Lochte then posted a 1:43.48 for 1st place in the 200IM, finishing the race over 4 seconds ahead of the rest of the field. This was nearly 5 seconds faster than his prelims time and he came within 3.5 seconds of his lifetime best from 2007. His Gator Swim Club training partner Grant Sanders snagged 2nd place at 1:47.65 while Liam Custer of the Sarasota Sharks tried to chase him down, ultimately touching the wall 3rd with a time of 1:48.20. Both Sanders and Custer added time to their lifetime bests, but Custer was the closest to his, adding  .8 to his freshly acquired best time from November.

Custer, a high school junior, followed up his LSC record-setting 500 free this morning with another solid swim, claiming 1st place with a time of 4:21.67. He added 3 seconds to his prelims time, but still touched the wall with a .83 second lead over Sanders who finished in 2nd place.

Considering how far he is off his stroke 100s, to be 3 seconds from his best in the 200 IM is really encouraging.

I think that has to do with older athletes losing their power and speed as they get older, but his endurance should keep up.

Tell that to 2016 Anthony Ervin. Or George Foreman.

not to mention Dara Torres

There is no way Torres wasn’t on PEDs

When people get older we see them getting better at sprinting, not switching to the 1500 and getting PBs

Master’s swimmers who are sprinters fare better as they age in terms of time increases. Jeff Farrell at 85 is an example. Dara is another. I doubt she was doing PEDS. She certainly was high profile enough to be targeted for testing.

He also went 1:36.2 in the 200 free yesterday. It’s going to be interesting to see how this plays out for him. I hope he can find a way to get on the team, but he’s fighting being a 36 year year old.

American freestylers will need to be on their A game at trials just to qualify for finals, so excited for these races