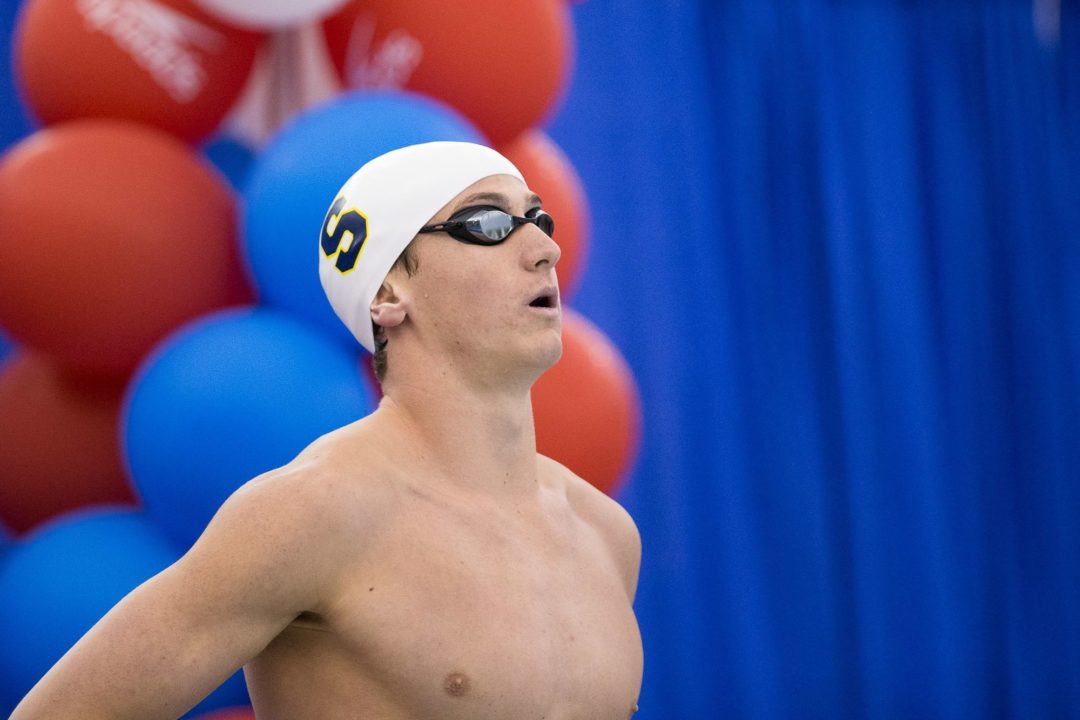 Scottsdale's Ryan Hoffer continues to step his National Age Group record down in the 15-16 division, as he went 19.38 tonight to break the mark for the second time in a day. Archive photo via Tim Binning/TheSwimPictures.com

Scottsdale’s Ryan Hoffer continues to step his National Age Group record down in the 15-16 division, as he went 19.38 tonight to break the mark for the second time in a day.

Hoffer originally held the record at 19.54, set last year at this meet. He lowered the mark by .01 earlier this fall at the Arizona High School State Championships, but clearly saved his best stuff for Juniors, going 19.45 in the morning and then 19.38 at night. That accounts for .16 taken off the record over his past three record-breaking swims, not a huge margin, but a solid amount in a race like the 50 free.

Hoffer was in a league of his own at Winter Juniors, winning the race by seven tenths of a second. He was the only swimmer under 20 seconds, blowing out a solid field with his tough underwaters.

That finals drop moves Hoffer into unique territory for an age grouper: Hoffer now would have scored points at last year’s NCAA Championships with his time, which would have been 15th out of prelims and 13th in the final.

Hoffer will have to continue to step his game up from here, though, as he’ll soon move into the 17-18 age group, where the NAG record stands at 18.94 from last year’s Junior National champ, Caeleb Dressel. Hoffer still has a long four tenths to go to get into that range, but he’s starting to establish himself, alongside Dressel, as one of the nation’s best young sprinters.

I believe he has a July birthday.

Short course yes; not so much long course.
He makes good use of underwater short course. Long course you only get advantage of 15 meters during the race. Big difference.

He is often in that mind trap ! LOL

Sounds so easy, just dive in and dolphin 15 yards, flip and dolphin another 15 yards and go 19.3. Except it isn’t.

While that may be true, I don’t believe we can begin comparing the young phenome to Chunky, the legend.