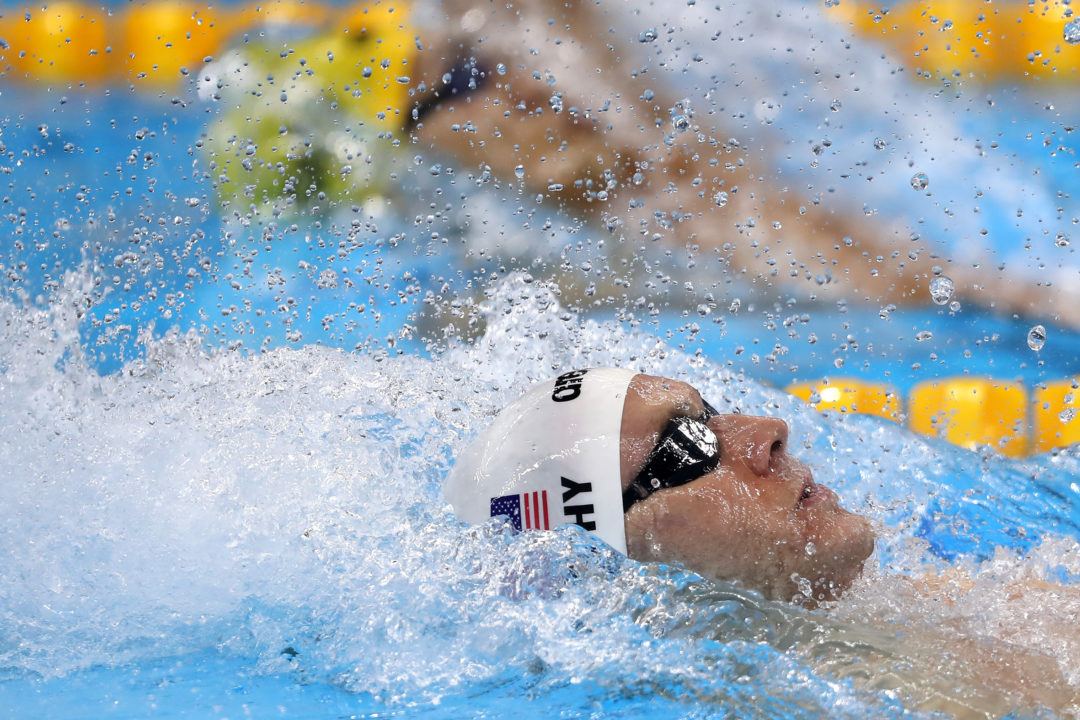 Repping the stars n' stripes Ryan Murphy of the USA managed to continue a longstanding tradition of American excellence in the 100m backstroke with a gold medal performance. His 51.97 makes him the fastest textile swimmer of all time in the event and ranks as the second fastest performance ever only behind Aaron Peirsol's world record. Current photo via Simone Castrovillari

Fresh of a world record in the 100m butterfly Sarah Sjostrom of Sweden managed to take down Katie Ledecky in a head-to-head battle in her semifinal. Sjostrom was a 1:54.65 at the touch in order to take the first overall seed ahead of Ledecky who was a 1:54.81. Sjostrom moved up on her on the last 50 to take the semifinal win.

After finishing a disappointing second in the 400m freestyle on the first night of competition China’s Sun Yang came back to win the 200 free in a time of 1:44.63. He chased down Chad le Clos who was out like a rocket from the start and ended up with the gold as le Clos picked up the silver. America’s Conor Dwyer was third.

Hungary’s Katinka Hosszu was not expected to win the 100m backstroke, but came up swinging in the final 25-meters to pass American Kathleen Baker and win her second gold medal of these games. Hosszu clocked in at 58.45 with Baker settling for silver in 58.75. Canada’s Kylie Masse and China’s Fu Yuanhui tied for third at 58.76.

RYAN MURPHY CONTINUES TRADITION OF AMERICAN GOLD IN 100 BACK

Repping the stars n’ stripes Ryan Murphy of the USA managed to continue a longstanding tradition of American excellence in the 100m backstroke with a gold medal performance. His 51.97 makes him the fastest textile swimmer of all time in the event and ranks as the second fastest performance ever only behind Aaron Peirsol’s world record. The USA has won every men’s 100m backstroke gold for six Olympics running dating back to 1996. David Plummer of the USA was third.

LILLY KING BACKS UP HER TALK WITH A GOLD MEDAL

Things were heated up between Lilly King and Yulia Efimova after talk of Efimova’s failed drug tests highlighted the fierce competition in these events. King and Efimova were charging for the wall with 15-meters to go when King found another gear and established herself as the Olympic champion. King won in an Olympic record time of 1:04.93, Efimova was second, Katie Meili third.

In the second semifinal of the men’s 200m butterfly Michael Phelps got to race Chad le Clos in their first matchup since the 200m butterfly final in London where le Clos infamously beat Phelps. Phelps ended up beating le Clos and finishing second in the final with a time of 1:54.12. Le Clos was a 1:55.18. Tamas Kenderesi of Hungary took the top seed in 1:53.96.

Being the world record holder and all, Hungary’s Katinka Hosszu seemed unbeatable in the 200m IM. Great Britain’s Siobhan-Marie O’Connor made a statement tonight, putting up the fastest semifinal time in 2:07.57. Hosszu, not fully rested after winning the 100m backstroke, was second overall in 2:08.13.