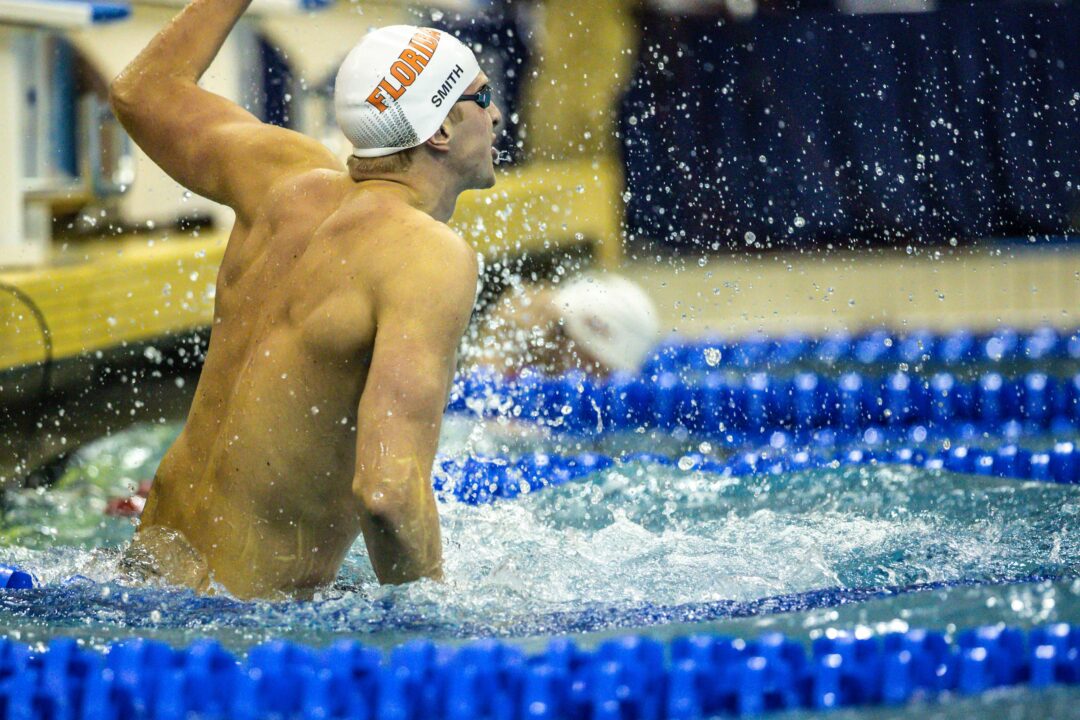 Kieran Smith was the 11th-ranked recruit back in 2018 but emerges as the top scorer in his high school class after four seasons in the NCAA. Archive photo via Jack Spitser/Spitser Photography

As we do each year, we’ll look back at the high school class of 2018, which just finished four years of college eligibility this spring.

2022 Note: Due to swimmers being granted an extra year of eligibility after the 2020 NCAA cancelation, some of these athletes may still have years of scoring still to come.

Check out this post for our analysis of the top 20 recruits in the high school class of 2018. This class was actually the first in which we did a re-rank for the swimmers when they were high school seniors (previously the final rankings were done during their juniors years). Since the re-rank gives us the best gauge of where the athletes were coming into the NCAA, and therefore we get a better idea of who improved the most during their time in college, we’re using the re-ranked top-20 rather than the original rankings from their junior seasons.

Note: we’ve made an effort to put a dash (–) in a season in which an athlete didn’t compete (or was cut short due to injury) rather than “no invite”. If you see an error please let us know in the comments.

Ninth-ranked Jack LeVant pulled out of the 2019 NCAAs in his freshman year due to medical complications and never ended up representing the Cardinal at the nationals.

Texas’ Matthew Willenbring was an NCAA qualifier as a freshman and then won the 2020 Big 12 title in the 200 IM before the NCAA cancelation. Willenbring has been dealing with a long-lingering health issue that has kept him out of collegiate competition for the last two years, but he hopes to make a return.

OTHER IMPACTFUL RECRUITS IN THE HIGH SCHOOL CLASS OF 2018

Of course, not every contributor comes from our top 20 list. Some swimmers develop extremely well in college. Some swimmers slip under our radar, or don’t prove to be late bloomers once they hit the NCAA.

We dug through NCAA results to find the best American swimmers from this class to not appear on our top 20 list. Again, it’s not always easy to account for redshirt years, gap years or mistakes in an athlete’s listed class each season. So if we forgot anyone, please let us know in the comments.

ALL INDIVIDUAL SCORERS IN THE CLASS

Where do the old guys, dean and shoults end up on this list?

It’s so interesting with the men that very few are huge points earners all four years, particularly their freshman year. The only recent ones that come to mind are Ryan Murphy, David Nolan, and maybe Seliskar. All the other ones I thought either had an off year (Dressel, Schooling, Licon) or didn’t swim three events every year (Conger, also Schooling).

Hey in all fairness I was seeded to be top 8 my freshman year but came down with mono. And this year I helped out 4 relays to top 8 finishes. Not my fault everybody else got dummy fast

Thanks the the edit swimswam (-:

You had a nice year Cody. Your first chance to compete a NCAA’s and you took home 4 trophies. How many swimmers get 4 trophies in their entire career!

And I noticed that the times you swam this year in all 3 events would have scored last year. The 5th year guys and the incredible amount of foreign swimmers recently makes it a tough year for everyone. Lots of the top recruits didn’t score this year.

For whatever reason I remember someone complaining that Smith was way too highly ranked in this class and this really goes to show how wrong they were! Top point getter in the class as well as a key relay contributor to Florida in the past 4 years.

Lewis Burras might be the biggest recruit in 2022 standars, he´s gonna have hell of summer…..

Florida consistently does more with less. Chaney is the first real blue chip recruit UF has gotten in years, and he’s lighting it up.

I’d like to see Kieran come back for a 5th year. Preparations for World Trials got in the way of what he might be able to really do.

Florida has always done pretty well at getting good international recruits which has helped them besides developing non-blue chip guys.

They got this guy named Caeleb Dressel to commit in 2014.

I disagree, and this shouldn’t be a crazy cold take but I might get some downvotes.

Schools like Florida/Texas have some killer recruits (some of the best in the country/internationally for Florida) and develop some “lower” ranked recruits and turn them into solid swimmers. In the same breath, Texas and Florida benefit greatly by the size of their recruiting classes. It seems as if there is no limit on the number of guys they can have on their roster. This is off of memory but I recall recently Florida having an incoming class of about 15 swimmers and their total roster somewhere over 40 or 45. There are few schools that allow over 35. Yes they get solid recruits and… Read more »

Ouch IU. Losing Backes to “mental health”, Franzman not scoring, Brinnegar leaving, and about a dozen others not named in the article.

Calvillo, Hamblin along in this class going from All Americans to irrelevancy. The IU burnout is real.

Not to mention losing talent from the 2019 recruiting class through immediate transfers: Marcum, Gallant and Bathurst.

Major props to guys like Burns, Matthias and Steele for grinding it out!!!