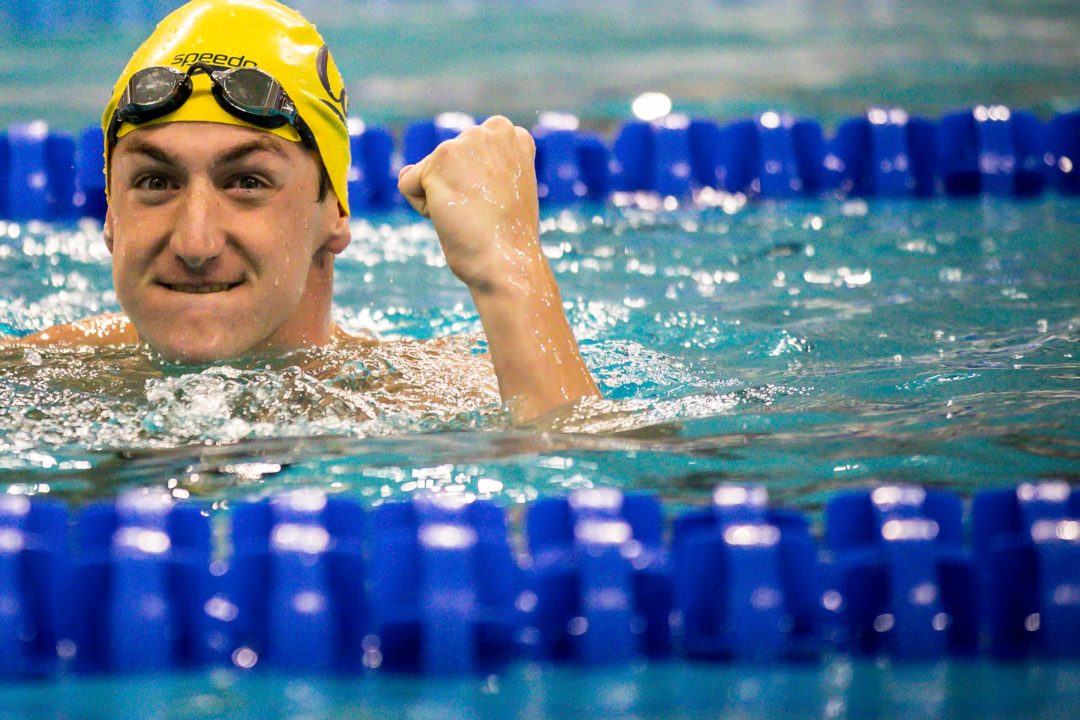 Cal's class of rising seniors - led by sprinter Ryan Hoffer - is an elite group. But so are Stanford's incoming freshmen, including flyer Andrei Minakov. Archive photo via Jack Spitser/Spitser Photography

Defending national champs, the Cal men took their third-straight Pac-12 title in a landslide, besting the field by almost 300 points. The Bears won 10 of 13 individual swimming events and four of five relays, only losing the 400 medley relay via DQ.

It was a brutal meet for relay DQs. In fact, of the six programs competing, only Utah escaped the meet without disqualifying a relay. Arizona and Stanford both DQ’d 200 medley relays, and the Wildcats ultimately beat out the Cardinal by just 4.5 points for second place. Zona junior Brooks Fail won the 1650 free, while Stanford senior Grant Shoults took the 500 free. Stanford were the beneficiaries of the Cal DQ in the 400 medley, getting that relay win by six tenths of a second over Utah.

Arizona State was just 6.5 back of Stanford, with senior Zachary Poti winning the 100 back.

Cal should return as the heavy favorites in the conference again. They return a lower percentage of individual points than almost anyone else in the conference (68%), but still return 112.5 more than any other program. The big rub for Cal is going to be relays, where they return only about half of their relay legs from last year. Losing standout sprinters Pawel Sendyk and Michael Jensen will clear out the relay depth a bit.

Stanford has a 53.5-point edge over Arizona in returning individual points, but Arizona does bring back more relay legs. Things look a lot closer between those two until you factor in Shoults, who took a medical redshirt as a junior and will return as a redshirt senior in 2020-2021. Behind those two lurks Arizona State, which outscored both Arizona and Stanford in relays last year and returns 18 of 20 legs.

Utah has a conference-high 83% of points returning, but they’re still solidly behind the Stanford/Arizona/ASU tier in total returning points. In the toughest shape is USC, dead last in the conference last year and with 61.5 fewer returning points than any other program. The bright side for the Trojans is that they return a conference-best 19 of 20 relay legs, though they had the lowest relay scoring totals of any team last year.

Stanford has the best recruiting class in the conference, and arguably the best in the country. Russian flyer Andrei Minakov is a World Champs silver medalist and should be a massive addition, with times of 50.8 in long course fly and 22.7/48.5 in long course free. This class is going to effectively reload every single event discipline for Stanford, depending on how fast these incoming freshmen can get up to speed:

Stanford is also going to get top-tier miler True Sweetser back from an Olympic redshirt. He scored 24 points at 2019 Pac-12s.

From there, it’s a bit of a drop back to Arizona and Arizona State in freshmen, though ASU gets two big redshirt returners that shift the rankings quite a bit.

Arizona gets a big-time transfer in 1:41.8-backstroker Ogi Maric. The former UNLV swimmer is 1:34.2/43.6 in freestyle. Other than that, the class is pretty developmental, but sprint-based. The wild card is Australian IMer David Schlicht, who sat out last season to prep for the Olympics after scoring 50 Pac-12 points as a freshman in 2019. Arizona has not yet confirmed whether Schlicht will return this year or not.

Arizona State‘s class adds Will Rose (20.1/44.4) to a burgeoning sprint group. The other key recruit is distance man Lleyton Plattel, a 15:03 miler. What pushes the ASU incoming group closer to the USC level are two Olympic gap year returnees. Jarod Arroyo (1:48.2/3:49.7 IM, 1:47.8 fly) comes in after a deferred freshman year, and junior Grant House will return from an Olympic redshirt season. He scored 39 points individually at 2019 Pac-12s.

Utah‘s class is huge (11 new swimmers) and led by Bosnian freestyler Marko Kovacic. He’s a 50.5/1:50.6 long course freestyler who should have some early impact on relays. The rest of the class is pretty distance-based, with 15:28 miler Dylan Becker probably the other big pickup.

Cal’s rising senior class is just too good to pick against. They lose 8 solid conference scorers to graduation, but their top three scorers from last year were all juniors and return big individual points. (Hoffer scored 60, Carr 57 and Julian 54). Cal also has a great recruiting class, and could see more individual points from Gonzalez, who took a DQ in the 200 IM last year.

Though freshmen scoring is typically somewhat muted, Stanford’s incoming class are difference-makers, and the return of Sweetser should put them solidly second. There’s not a great argument for them to beat Cal though, at least not yet. The 100+ point margin in returning individual points is brutal, plus both teams return the same number of relay legs. Freshmen typically don’t account for as big a percentage of points as you’d expect, so Stanford might need two years with this elite class on board before they can challenge for a return to the top of the Pac-12.

We’ll take ASU to pass up Arizona in the hunt for third. That’s mostly due to the impact House will have on ASU relays that already scored 134 points last year. Arizona has their own sprint ringer in Maric, though, and the battle for Grand Canyon State supremacy should be close.

USC’s recruiting class is good enough to project them rising past Utah this year, although there’s a lot in flux with a head coaching change. Utah had zero scoring juniors last year, so they should be primed for a pretty good two-year run.

It’s unfair to simplify in the way you have done here. We can all agree that everyone is different, college teams not excluded. It’s reasonable to believe that there is a selection bias in swimmers attending Stanford as they are on average more likely to have other time consuming goals. Abrahm Devine majored in CS and came in a 1:47 3:45 IMer. Not long before him, David Nolan’s senior year (biomech. engineering) saw him smash a barrier that survived Lochte. I’m not even going to pretend you’re blaming Jack Levant’s relative slowdown in swimming progress on his coach or his team mates or himself, although the fact that he’s the most recent superstar with a few seasons under his belt… Read more »

Dan Schemmel’s first “complete” recruiting class will be 2021-25. Most of the Class 2020, which is exceptional, had been pretty much all set before he took over the program. He deserves a chance to show what he can do for these young men in and out of water.

Boys and girls are very different and you will find college participation rates and grades across sexes support that. They’re also very different socially (esp in high school with hormones and whatnot). I’m not sure we can use the women’s team’s lack of similar symptoms as strong evidence of much for the men’s team, because the girls at the top of HS swimming’s totem pole are different from the boys in ways that I’d be insensitive to dissect on a forum frequented by HS swimmers. It’s analogous to commenting on the personality of those in the men’s 50fr final at NCAAs by looking at the characteristics of the 1650. These groups of people get to the same places but have… Read more »

Hope Dan gets most of the remaining 2021-25 uncommitted top recruits (as ranked by swimswam), some of whom are very talented with great potentials. He will then needs one or more top recruiting classes to bring Stanford to top 5 or even contention.

Also I wasn’t commenting on Schemmel. I have nothing against him and didn’t mention him in what I’d now like to call my Ted talk. Thanks for listening.

And some further info: Stanford’s more recent acceleration in relative prominence trends with the economic power of the surrounding region, as do the reputations of most universities. Silicon Valley took off and Stanford has changed a lot since then. Probably more so in some ways than it had in decades prior. We should expect to see these changes reflected in the students attending

What’s with the Yeadon and Pac 12/Cal comments? Is he transferring in?

I can’t find the results from 2020 Pac12 Championships on MeetMobile. Does anyone have a link to the meet results? When reading these I usually end up going back and fourth between the article and the 2020 results a hundred times lol.

Here’s a good link with all results: https://swimswam.com/swimswam-meet-results-archive/

Wow – epic link – many thanks!

That link is getting bookmarked!

Hard to believe Hoffer and Mefford’s class are already seniors

It’s crazy…yeah. College careers go by fast. Last year’s freshmen will be seniors after the next season is done.