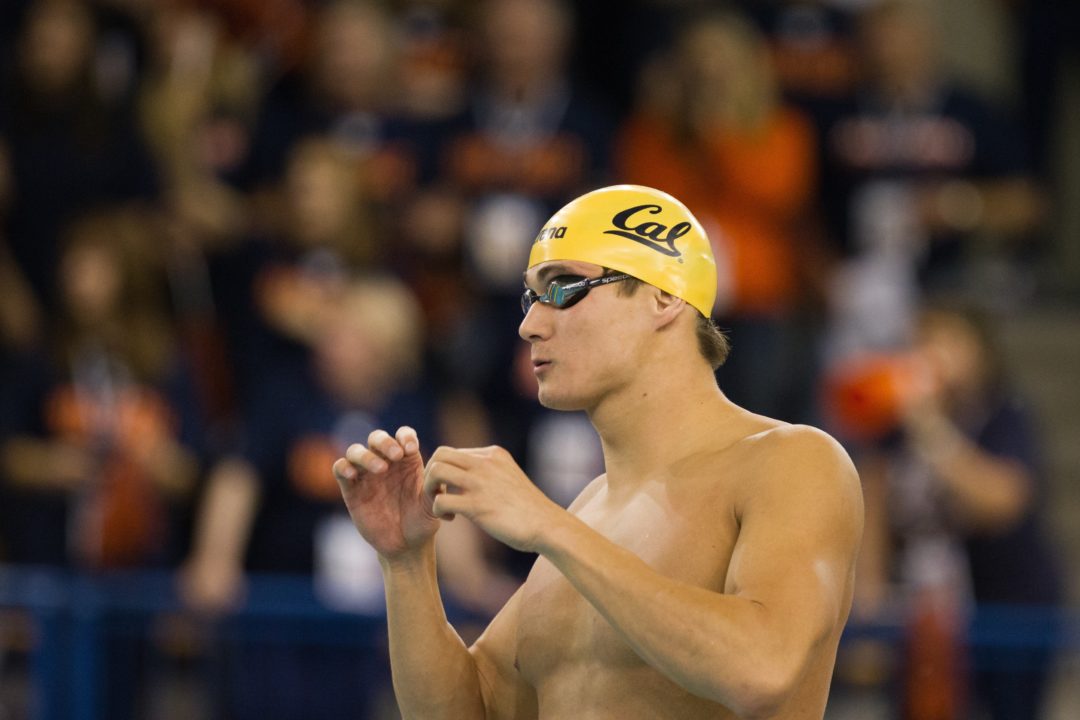 In May of 2009, a 20-year-old Nathan Adrian – then a sophomore at Cal – tested the myth that swimming in syrup makes you slower than swimming in water. Archive photo via Tim Binning/TheSwimPictures.com

The real flashback video you’ve all been waiting for.

Eleven years ago this month, then-sophomore at Cal Nathan Adrian took one for the team and hopped into a swimming pool full of syrup – and sacrificed a full-body Team USA suit in the process (it was at the tail end of the supersuit era, anyway).

On an episode of the hit Discovery Channel series ‘MythBusters’ – which is filmed in a variety of Bay Area locations, a short drive from Cal’s campus – the hosts sought to debunk the myth that swimming in syrup makes an individual slower than when they swim water. To test the theory, Adrian swam in a 25-yard pool with regular water and then swam in a pool filled with Guar gum syrup (500 times thicker than water).

Adrian, fresh off of winning NCAA titles in the 50 and 100 free, swam the water length in 9.81 seconds and finished the syrup swim in 10.87 seconds – over 10% slower. One of the hosts, Adam Savage, also tried the experiment and found his syrup times to be closer to his water times, and also much more consistent than Adrian’s.

Savage and co-host Jamie Hyneman concluded that because he was so used to his technique in water, Adrian’s technique was affected much more negatively by the syrup than Savage’s was. Adrian said that swimming in the syrup “at speed” didn’t feel much different than swimming in water.

In the end, they deemed the myth was plausible, depending on the viscosity (gooeyness) of the syrup.

“It was a really fun experience,” Adrian said at at the time.”‘It was cool hanging out with the show’s hosts, Jamie [Hyneman] and Adam [Savage], and getting treated like a T.V. star. It was a nice day in November and it allowed me to miss practice.”

I remember being puzzled about how he was able to do this under NCAA amateur rules.

Assuming he got paid, I don’t think that would violate NCAA amateur rules. To be literal, he got paid to participate in a test. Can be same thing as NCAA swimmer getting paid to give swim lessons. He didn’t get paid for his competition results.

Open to other people’s interpretation.

Regardless of how you interpret the rules, I’d be willing to bet the Cal compliance office would want no part in allowing a student-athlete to get paid to “conduct an experiment” on national TV.

Athletic Departments prefer to lie low, not press the limits of the rules and advertise it on TV. Would have been fun to watch Nathan Adrian accept $800 for a TV cameo, then fight the NCAA up to the Supreme Court over it.

Hmm. This question might actually be explored better in simulation, so that you can have the exact same input (technique and force) and avoid having Nathan Adrian’s problem. I’ll try to think of a simple way to do this, but the changing shape of the swimmer makes this a weird CFD problem and potentially one my computer can’t do.

In fact, I think the question becomes dramatically less interesting in a simulation. In a simulation, it’s simply a matter of the drag/force vectors, which is a little interesting still, but…the most interesting conclusion of this to me was how the change of technique caused by the syrup pushed the novice and the expert closer together.

It actually seems like it might be good training, in a running-with-weights sort of way. At the same time you probably couldn’t help but take in a few empty calories along the way, though.