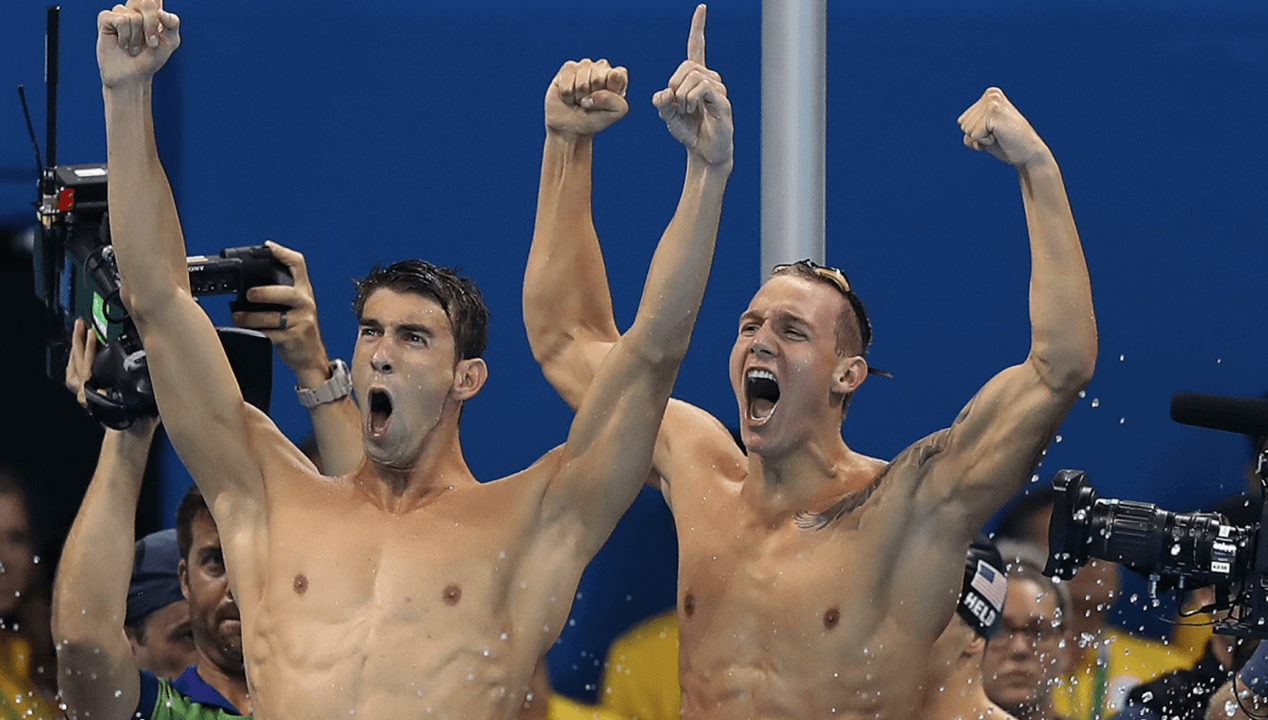 Caeleb Dressel got the U.S. off to a great start, and a superb second leg from Michael Phelps gave the Americans plenty of clean water to bring home the gold Current photo via Simone Castrovillari

Our relay roundup from last night’s women’s 4×100 freestyle relay was such a hit that we’re going to continue this series for the rest of the games.  Each member of the Team USA quartet put together great swims tonight to record the fastest textile swim in history.  Here’s a breakdown of the eight finals teams, including a list of the fastest splits from the field:

Without an ounce of sugarcoating or homer-ism, Team USA by far had the best overall relay performance; the right personnel swam tonight, and they were firing on all cylinders.  Caeleb Dressel gave the U.S. nearly a body length lead off the start, and held it together enough to turn in a new lifetime best.  Michael Phelps did what he does best, biding his time through the first 50 before rocketing off the turn to give Olympic rookie Ryan Held a big lead.  Held swam a collected, controlled race to keep the lead for Nathan Adrian, who has shut the door time and time again for Team USA, and may be the best closer in the world.

There were a lot of questions when Held got the nod to over Anthony Ervin to swim in finals, after Ervin turned in a slightly faster swim in prelims.  We haven’t heard how the decision was made (if Ervin elected not to swim finals, or if the coaches made the call), but regardless of how it took place, going with Held was the right decision, even if the U.S. didn’t win gold tonight.  Ervin definitely has more pure speed and probably a “higher ceiling” on relays, but he hasn’t been particularly consistent in the 100 in recent years, and when he’s off, he’s way off.

Three of these four legs were exactly what France needed.  Mehdy Metalla closed quickly on Dressel and finished with a lifetime-best 48.08; Florent Manaudou not only held together for the full 100, but also dropped one of the fastest splits in the field; and that may have been the fastest split of Jeremy Stravius’s career.

However, Fabien Gilot slipped up on the second leg, splitting over a full second slower than last summer in Kazan (47.08).  Gilot has been a staple on the French 4×100 free relay for the last five years, and has routinely split in the 47.2-47.7 range.  The ground lost by Gilot to Phelps was too much to overcome.

Although they managed to came home with a medal behind a quick anchor from Cameron McEvoy, this felt like a swing-and-miss for the Australian men.  Seen the favorites by many, the Aussies were out of the race from the start when James Roberts turned in a 48.88 leadoff.  Kyle Chalmers brought them back in the medal picture with a strong second leg (though he was 47.04 this morning), but Australia couldn’t afford to have James Magnussen (who would realistically max out at 47.8-48.0) dive in for the third leg a full second behind the U.S.

With the well-known controversy surrounding the Russian team, there’s plenty of swim fans who are happy to see this squad miss the podium.  Danila Izotov, Vladimir Morozov, and Alexander Sukhorukov were all solid, but Andrey Grechin was a full half-second slower than he was at Russian Nationals in April.

There was a big gap between fourth and fifth place tonight; Brazil couldn’t expect to medal with nobody breaking 48 seconds.  Marcelo Chierighini’s 48.12 lead off was great (and sets him up to compete for the A-final in the individual 100), but you can’t get away with a 48.72 from a flying start when nobody else is under the 48 mark.  Not having Bruno Fratus in the final (48.08 last summer at Worlds) really hurt.  Joao De Lucca rebounded from a disappointing individual 200 freestyle this morning with a good 48.11 anchor leg.

The Belgians jumped up three spots from their 9th place finish at 2015 Worlds, with the improvement of Glenn Surgeloose serving as the catalyst.  Prior to this season, Surgeloose was typically splitting 49-low from a flying start, which translates to roughly a full second slower from a flat start than this evening.  Jasper Aerents, at 48.47, also had a quick split relative to expectations.

Canada has been on a roll through two days, but tonight’s relay was bit disappointing.  Santo Condorelli was a half-second slower than he was last summer, and anchor leg Evan Van Moerkerke had the slowest split in the entire field by nearly a full second.  To be fair, Yuri Kisil (47.76) and Markus Thormeyer (48.40) were very solid.

The Japanese didn’t have a realistic chance at a medal tonight; they just don’t have the sprint depth to contend, and the closest thing they have to “go-to” sprinters were a bit off.  Katsumi Nakamura is the closest thing they a a half-second slower than this morning, and Shinri Shioura was three tenths slower from a relay start than his flat start best of 48.35 from Japanese Nationals.

Dressels flat start, phelps turn and helds relay start were all huge. Shows the importance of the details. Would’ve been way closer without those big components

What a great race by the US — everyone did their individual jobs to perfection. There’s a lot of talk today about Phelps’ 47.12, and even more talk about his turn, which was truly magical…but here’s the number that impresses me more than any other…Phelps’ reaction time on the exchange with Dressel was timed at 0.08 seconds!!!! (Dressel: 0.65, Held: 0.39, Adrian: 0.35). So much for reflexes slowing with age…The intangibles are mindblowing! Congratulations to all 7 relay swimmers on the day…was great to watch.

Not a fan of the RIO swimming results website. (it doesn’t provide splits, or I can’t find them)

I say always post reaction times when posting the splits as that is clearly a relay stat a coach would look at as well. Relay reaction is something college kids definitely have practice with.

I think so unless one all of the relay-only swimmers show something amazing or Phelps has a bad 200 fly (which isn’t likely). I’d expect an evening team of Dwyer, Haas, Phelps, and Conger/Lochte (very curious to see if Lochte shows stronger form than at trials).