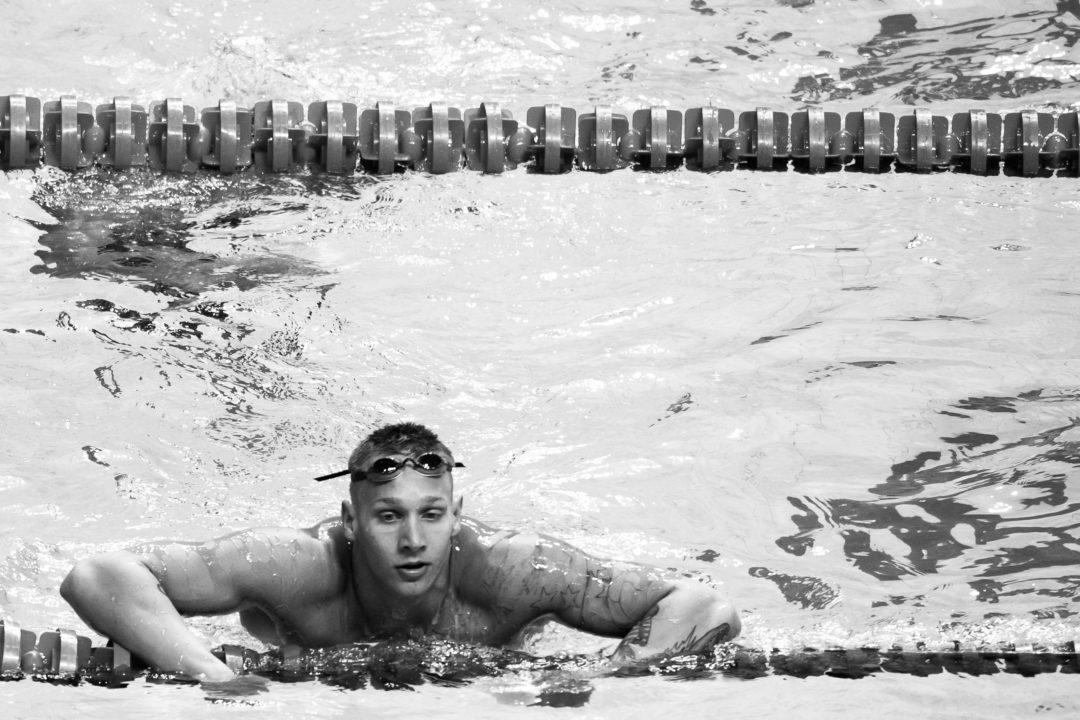 After breaking the world record in the prelims, the U.S. will substitute in four new legs for the final. Matt Grevers takes over for Ryan Murphy on backstroke, and Simone Manuel takes over for Mallory Comerford on free. Those were the anticipated moves.

A bit more surprising is their decision to put a female on breaststroke and a man on fly, as Lilly King and Caeleb Dressel take over for Kevin Cordes and Kelsi Worrell. Hard to argue with the picks though, considering King has a world record under her belt and Dressel a pair of American records so far in Budapest.

Australia has also exchanged their entire lineup, moving in Mitch Larkin, Daniel Cave, Emma McKeon and Bronte Campbell in exchange for Kaylee McKeown, Matthew Wilson, Grant Irvine and Shayna Jack. The only somewhat surprising move was Cave, who did have a solid 100 breast going 1:00.22, but Wilson’s 59.69 this morning was argument to keep him on.

The 3rd seeded Canadians have made three moves, going with newly minted 100 back world record holder Kylie Masse on the lead-off leg, Penny Oleksiak on fly and Yuri Kisil on free. Richard Funk stays on as the breaststroker after sizzling to a 59.0 split this morning.

The British made a pair of moves, not surprisingly moving in Adam Peaty, as well as Siobhan O’Connor on free in exchange for Ross Murdoch and Freya Anderson.

Russia made three moves, including inserting 100 breast bronze medalist Kirill Prigoda in, while Grigory Tarasevich takes over on back which begs the question: what is up with Evgeny Rylov this week?

China’s made three exchanges, including 100 back world champion Xu Jiayu leading off, Italy has also made three moves, and Germany has made two.

This race is shaping up to be a very exciting one, with the teams clearly taking this race seriously. In total, just half the teams went with the traditional 2 men – 2 women lineup. Canada and Germany have gone W-M-W-M, while the U.S. (M-W-M-W) and GBR (W-M-M-W) are the only two with those combinations.

Meehan is showing his bias again. He did it with Ledecky getting a free pass to be on 400 free relays finals. And now Simone bumps Mallory….Mallory beat her at Trials and even went faster at Worlds, leading off the relay….true bias….

If it’s to give everyone more medals why not have Simone in prelims and Mallory in finals. Same amount of medals…..

Makes all the sense in the world to put Manuel in the final. She’s been faster, and both will get medals.

KORN…let’s leave to our US coaches. There is reasoning in everything that they do. Two world records and 8 individual people with gold medals. I would say Meahan knows best.

Like putting Katie on 400 free relay? And she didn’t belong as she proved. Both are Meehan swimmers?! Weird?! I agree the coaches have the final say but I think it has been biased and that is what I said

That relay was Katie’s first race. In rio she anchored the 400 free relay with a 52.6 so the coaches thought she would do something similar to that.

Plus, Its Katie Ledecky were talking about. Probably the greatest swimmer in the world rn (In terms of accomplishments)

Woulda gone with number ones. Flip it at night

Or reverse. But you get the point, let the number 1s get the medal, we’re gonna win it no matter what anyways, its only fair

agree, not sure why simone is on at night and not comerford????

Simone went 52.1 anchor on the relay the other day. Mallory got the American record on the relay yes, but Simone has not had a swim to challenge it yet and Mallory went a 52.8 this morning so…

Mallory beat her at Nationals. that is our Trials. sorry you have to go with that until they meet head on again

Abbey Weitzel also beat Simone at Nationals. And? In both the 50 and 100 free.

I meant to say Abbey beat Simone at the Olympic trials in the 50 and 100 free. Those meets prior to Worlds and the Olympics are just titles. They really don’t tell you how swimmers will perform at the big meet. Some swimmers are fully tapered and some only partially. And Mallory has the 200 free relay. Maybe she wanted to swim in the morning. Everything is not a plot against Mallory.

But Mallory broke her own AR the first day so she still owns the 100 at this point!

Curious where you draw the line on this? What if the winner from trials gets sick, do you make an exception then? What if the second place finisher at trials drops massive amounts of time at the championship meet? Do you make an exception then? I don’t think your black and white thinking has any place here and it’s a good thing you’re not the one making the decisions.

If Mallory led off the other night in 53.0, then you have a good argument. But she went faster than Trials

is 52.1 SPLIT faster than 52.5 FLAT START….maybe, maybe not. you go with the trials winner…that is why we have Trials until proof otherwise

The bigger question is why Mallory went 52.5 flat start and anchored with a 52.8 with a relay start. Greg did the right thing until both are able to swim the individual 100 free. Everyone gets the same color medal and Mallory gets more rest.

Once Mallory is on prelim relay you aren’t taking Simone off finals relay. That would cost Simone a gold medal. So the decision should have been based off earlier performance in meets. It is definitely a bias.

@KORN: According to your rules, Phelps shouldn’t have been on any of the freestyle relays in Rio.

You would not have used Phelps instead of Adrian

KORN…Simone has the faster relay split thus far in the meet and has not had the opportunity to swim a flat start 100 free like Mallory. Greg therfore or only used their anchor splits from this meet. Simone anchored the free relay with a 52.1 and Mallory was a 52.8 this morning. The faster time in the individual free will likely determine the evening anchor of the women’s medly relay.

the relay decision was made before they swam this morning or they wouldn’t put Mallory on in the morning and at night……probably even if she went 51.5 split. i disagree wholeheartedly with that decision.