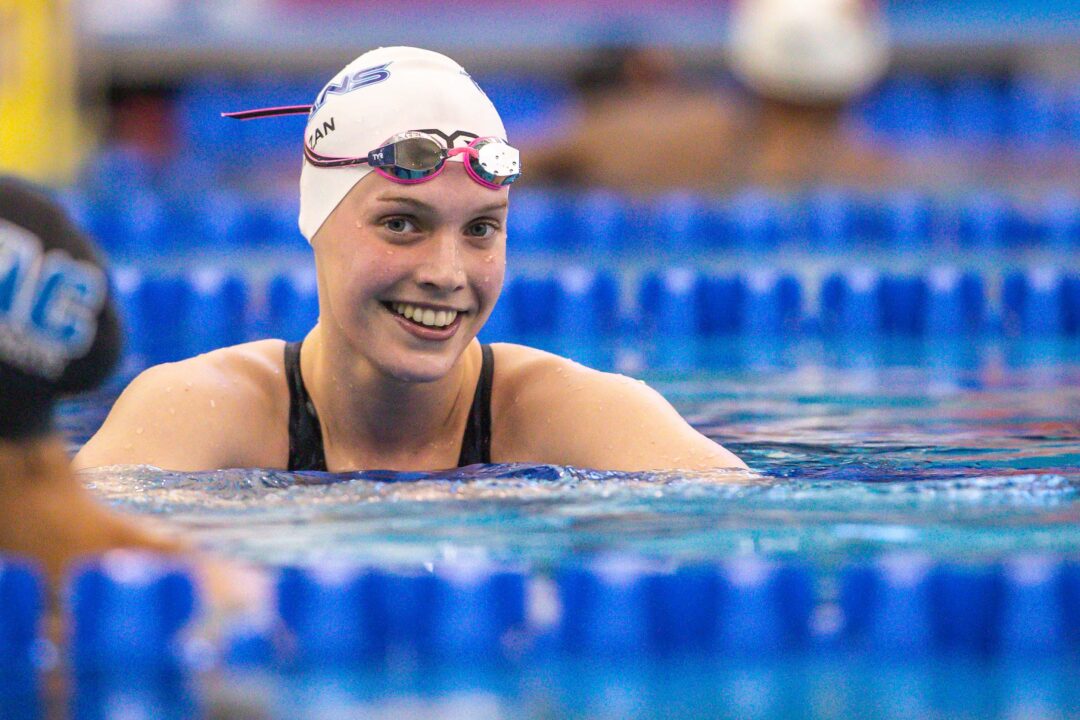 Claire Curzan is one of the top NCAA prospects of all-time, and she leads a recruiting class that includes four of our top ten recruits nationally. Archive photo via Jack Spitser/Spitser Photography

The Wolfpack got three key contributors along with several intriguing depth pieces in this class. Top-10 overall recruit Kennedy Noble is the headliner, bringing in 51.5/1:51.9 backstroke speed to a program that just helped Katharine Berkoff win the NCAA 100 back title over some massive names. Noble and Berkoff should overlap at least one year in Raleigh, and both could easily be scoring together this year – Noble’s best times would have scored in both backstrokes at 2022 NCAAs.

The versatile Katherine Helms has to feel like a big recruiting win for NC State. They recruited her out of Virginia, the backyard of ACC rival and defending national champions UVA (head coached by a former NC State assistant, no less). Helms is a 22.3/48.8 sprint freestyler who is among the better recruits in the class in those events. What makes her really interesting is range up to 1:46.1 in the 200 free and across to a 4:09.8 in the 400 IM. That combination of speed and endurance makes her an especially intriguing prospect to watch across this year.

The Wolfpack also adds sub-minute breaststroker Aubree Brouwer (59.3/2:10.5), along with a pair of 22-second sprinters in Cassie Moses (22.4) and Meghan Donald (22.6). Look for NC State to keep reloading in the sprint free relays after finishing 3rd in the 200 free relay and 4th in the 400 free relay at NCAAs last year.

Coming in as a transfer is Canadian Sarah Watson from Akron, a two-time All-American with scoring capabilities in the 100 fly, 200 IM, and also some freestyle speed that could be utilized in the relays.

English swimmer Tamryn van Selm brings international experience to the squad, having represented Great Britain at the European Championships last month and winning a gold medal as a prelim member of the women’s 4×200 free relay. With long course bests of 55.6/1:59.0/4:13 in the 100/200/400 free (conversions of 48.6/1:44.3/4:43), van Selm should make an immediate impact.

Nina Kucheran heads across the state from Florida State University, bringing 59.0/2:08.5 breaststroke speed to a Gators program that was sorely lacking a breaststroker last year. She’s a fifth-year senior with just one year of eligibility remaining, but should have plenty of impact on the medley relays in her one season in Gainesville.

Caroline Pennington was an NCAA-scoring miler last year for USC. She brings 15:48 mile speed to Florida, and has three full years of eligibility remaining.

Even without transfers included, this class would still be in our top 10. Zoe Dixon is a big-time IMer, with lifetime-bests of 1:56.21 and 4:06.4. The latter would have scored at NCAAs last spring. Hayden Miller adds an NCAA-scoring mile time. Her lifetime-best is 16:02, right around Weyant’s best, and actually faster than what Pennington went while finishing 11th at NCAAs last year.

Virginia reloads after winning the national title with the nation’s #2-ranked recruiting class. The Cavaliers have been on a recruiting tear the past few seasons, and this group will definitely continue to add talent to UVA’s already-ridiculous stockpile.

The Cavaliers also bring in two true freshmen with NCAA scoring times already in hand. Carly Novelline is one of the better backstrokers in the class at 51.6/1:53.1, and Emma Weber has already been 59.0/2:09.0 in the breaststrokes.

Claire Tuggle is a bit of an enigma. She was an age group standout who ranked in the top 5 nationally in this class when we ranked them as sophomores and juniors. She hasn’t seen much in the way of time drops since her sophomore year, but still brings in NCAA invite times in the 200 free (1:44.9) and 500 free (4:41.3). She’s got massive potential, as evidenced by elite long course times, and offers huge upside if Virginia can help her break through her recent plateau.

Another name you might recognize from the age group ranks is Zoe Skirboll, who has become one of the more versatile swimmers in the class. She’s a 22.7/49.6 sprint freestyler, but also 1:00.2 in the breaststroke and 1:58.1 in the IM. Virginia will have plenty of options when it comes to writing lineups for Skirboll, and it will be worth watching where she focuses her event selections this fall.

Another noteworthy transfer coming in is Sam Baron from UCLA. Baron, entering her junior year, was an NCAA qualifier in 2021 and bolsters UVA’s butterfly corps with lifetime bests of 51.6/1:55.6.

For the third year in a row, Stanford has recruited the top class in the nation, accumulating a huge stockpile of talent as they try to wrestle the NCAA title back from Virginia. This year’s class is headed by the #1 and #2 recruits in the class – club teammates from North Carolina who have ranked 1 and 2 in this class since they were sophomores.

Claire Curzan is one of the top NCAA recruits of all-time. A U.S. Olympian before she ever sets foot on a college campus, Curzan brings in the best times of any freshman in the nation in a whopping seven different events. She’s the fourth-fastest swimmer in history in the 100-yard butterfly at 49.24, and the sixth-fastest of all-time in the 100 back at 49.52. She can swim up to the 200s extremely well, too, going 1:50.8 in the 200 fly and 1:49.3 in the 200 back. She’ll probably wind up focusing on backstroke and/or butterfly at the college level, doubling in the 100 back/fly and choosing one of the 200s. But she’s also got elite sprint free speed (21.5/47.2/1:42.4) and will be an incredible relay weapon for the Cardinal.

Even the depth pieces in this class would be stars in any other recruiting class. Natalie Mannion is 52.9/1:54.2 in the backstrokes. Sophie Duncan has lifetime-bests of 1:58.9/4:09.8 in the IMs, the latter being an NCAA invite time. Diver Emilie Moore was a 2020 Olympic Trials qualifier and a finalist at U.S. Junior Nationals.

For those keeping count at home, that’s four ranked recruits and four recruits in our “Best of the Rest” section just outside the top 20, plus one elite diver. The big question is whether this class will be enough to push Stanford back to an NCAA title. There’s really no question about Curzan’s impact. If the rest of the class has good freshman years, the Cardinal will be tough to beat come March.

Why do we think Claire Curzan will do backstroke over freestyle? Because Stanford needs a backstroker, or because she’s generally moving away from freestyle?

The question is on day 3 she probably chooses between 100fly or 100 back. Both are pretty stacked

When was the last time that the Cal women’s team wasn’t in the top 16 recruiting classes?

Probably some time before SwimSwam was ranking the classes.

Where’s Alabama in this mix? Thought they had a Top 5 team and the best hire in years.

This is a ranking of recruiting classes, not teams.

Shouldn’t a top 5 school be able to bring in a recruiting class that makes the top TWENTY rankings?

Makes it harder on a young coach when the former coach is negative-recruiting against the new coach on the internet.

Thanks Braden. I get that, but I guess if they were as good as earlier articles that they are recruiting well. Is there something I’m missing?

Alabama brought back almost their entire team from last year. They didn’t have much money to play with in recruiting this year as a result. This is also a class that didn’t know if Margo had the coaching chops to carry forward the team’s success. I think the 2022 results have assuaged a lot of those concerns, so I would expect recruiting to improve in future seasons.

You can’t possibly know the scholarship situation at Alabama. Margo has had ONE year of coaching (in total ever) someone else’s swimmers/recruits and you think this has calmed prospective recruits’ concerns about her coaching prowess? Hard to determine her ability based on a single season. Instead you blame the previous coach (who put Margo and co in Bama’s current team position) as the reason Bama isn’t getting recruits? Could it be the fact that she has one year of experience in coaching amongst other reasons? You seem to have an agenda here.

Yeah my agenda is that I think it’s super weird that the former Alabama head coach (who was, by the way, also her boss and HER COACH) goes on the internet and rips her, and I think he should stop doing it.

Also, please stick to one username in any given commenting thread. Thanks!

What platform is this happening on?

Props to Jared for apparently already updating the article within a couple hours based on the comments. I realize It’s very tough to find all the noobs at all of the schools but if you need someone to do a quick scan of the team rosters on their websites for the top 10 schools for a cross reference, then sign me up.