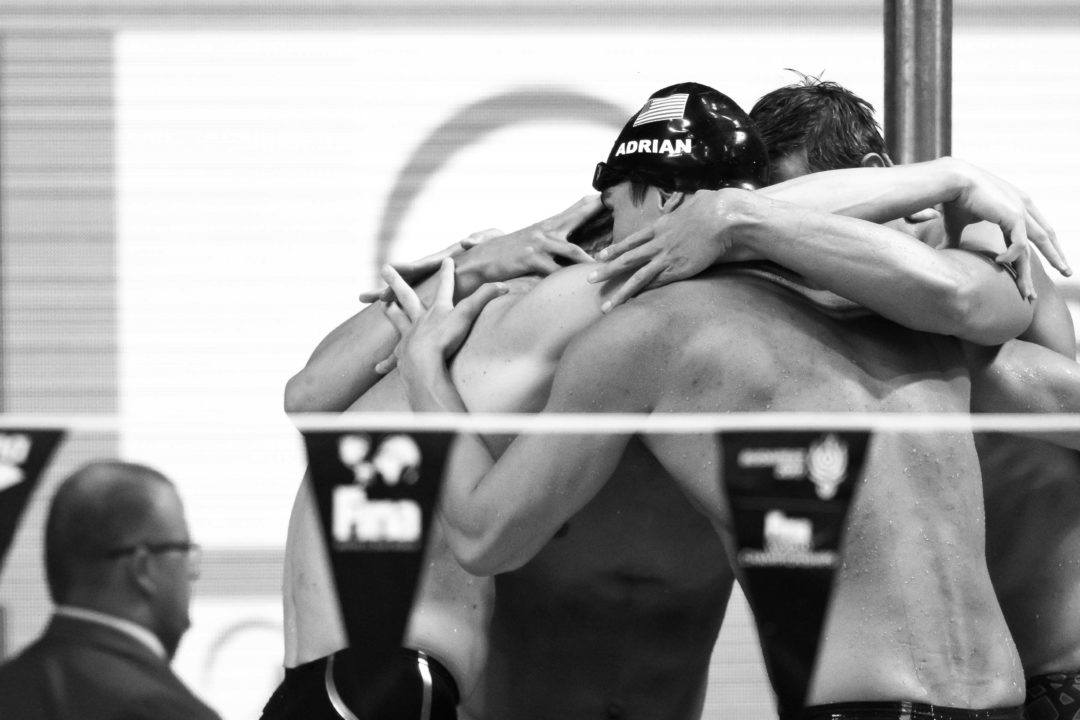 Team USA came within 8/10 of the World Record in the men’s 4x100m medley relay, which they set in Rome at the 2009 World Championships. Matt Grevers led off with 52.26, the third-best 100 back time in his career, and his fastest performance since the 2012 Olympic Games. Grevers put the Americans out front by more than half a second. Kevin Cordes took over and swam a 58.89 breaststroke leg, but Great Britain’s Adam Peaty exploded with a 56.91 split to give the British a slight edge leading into the butterfly. Caeleb Dressel proceeded to split an outrageous 49.76 100 butterfly, and Nathan Adrian went off with a full one-second lead over the British quartet. Adrian brought it home for Team USA in 47.00 to secure the gold. Great Britain held on for second place, while Russia, on a 46.69 anchor from Vlad Morozov, eked past Japan to win the bronze medal. Hungary’s Dominik Kozma was the second-fastest on the end, splitting 46.72 to give Hungary a seventh-place finish.

Team USA was all golden in this race, going 3:27.91 to scare the WR and sail to the top of the podium once more. Matt Grevers (52.26), Kevin Cordes (58.89), Caeleb Dressel (49.76), and Nathan Adrian (47.00) got things done, with Grevers’ and Dressel’s splits really standing out. In addition to being field-best for both men, Grevers came very close to his lifetime best of 52.08, proving how on-form he really is. Dressel, of course, went Remel on the field and helped the U.S. get ahead despite Adam Peaty going 56.91 on the breast leg to catch Cordes.

Adrian stuck it out at the end, but there were a couple very strong anchor legs. Vladimir Morozov was 46.69 to go the fastest split this week, helping Russia to bronze, though Duncan Scott was 47.04 to hold him off to give GBR silver. Meanwhile, Hungary’s Dominik Kozma went absolutely berserk for a 46.72 anchor. Hungary was back in 7th, but their back-half of Kozma and Kristof Milak on fly (50.97) ensures that the nation will have continued success in the coming years.

Don’t think anyone has actually talked about this but peaty’s high stroke rate comes from how fast he is able to lift his head up out of the water. When his arms are barely pulled apart, his head is already out of the water, but for other breaststrokers, their heads only lift out of the water when their arms are in the push phase of their pulling cycle

I HATE these video players; does FINA make you use them? No quality settings. Jolty playback. Poor browser application. Anyway we can get them back onto Youtube? Or switch them out when they do?

I switched to Firefox to watch them, and they’re WAY better than on Chrome.

Dressel’s reaction time was TERRIBLE too; .47. Most professional swimmers go between .10-.20. With conservative leeway, give him a .20 reaction time and he would have went under 49.50

These comments keep getting hate and I don’t understand. Just compare it to the average relay reaction. 0.47 is quite slow- and could be to a fatal degree, should you get 2nd by less than that amount.

most “professional” swimmers focus on individual races. It’s those amateur student athletes in high school and college that end up doing all the relays

But he wasn’t a professional though….

Would’ve been tough for Vlad finishing 4th in the 50 again(happened in Kazan). Happy he stepped up here and goes home with a medal.

Almost unforegivable error by Haas in prelims came within less than a hundredth of a second of DQing team when they had a comfortable lead to qualify.

Overhead shot of Peaty — his kick is unbelievably narrow. Feet barely outside his knees. Guess that’s how he gets that turnover.