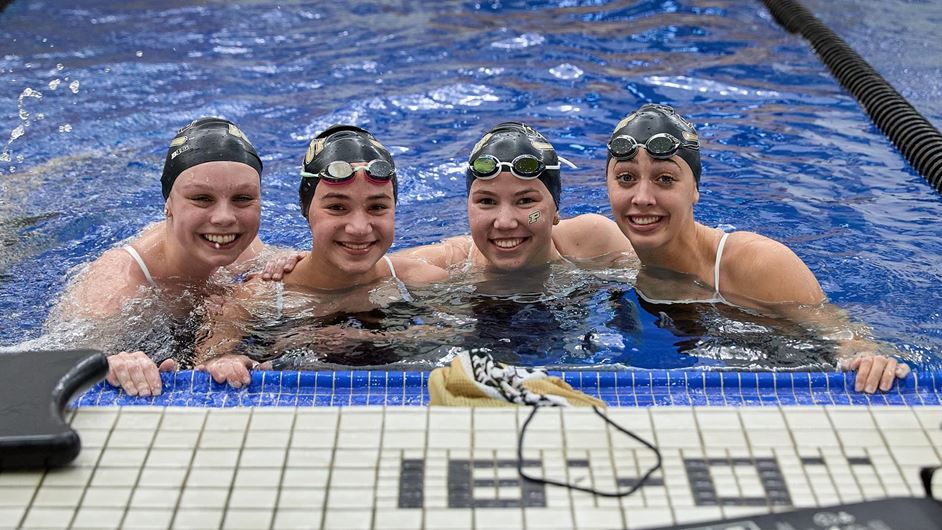 The Purdue women won 10 events and the Purdue men were victorious in nine events. The Boilermakers swept the relays and the diving events. Current photo via Purdue Athletics

WEST LAFAYETTE, Ind. – The Purdue swimming & diving squads won 19 of the 24 events contested Saturday to emerge victorious in the team scoring among double-figure fields of teams at the annual Indiana Intercollegiates meet at the Morgan J. Burke Aquatic Center.

The Purdue women won 10 events and the Purdue men were victorious in nine events. The Boilermakers swept the relays and the diving events.

It was the men’s 200 free relay team that produced the most impressive showing in the final event of the day. Ryan Hrosik, Brady Samuels, Idris Muhammad and Nikola Aćin teamed up for an eye-opening October time of 1:19.06, which ranks third nationally on the young season and was nearly good enough for a spot among the program’s all-time top 10 list. Samuels (19.77), Muhammad (19.49) and Aćin (19.33) all posted sub-20 second 50-yard splits on the final three legs. Hrosik won the 50 free individually Saturday with a time of 20.75.

The Purdue divers dominated the springboards. The Purdue men had the top five finishers on both 1-meter and 3-meter. The women produced the top four finishers in both events. Emily (Bretscher) Pfeiffer swept the women’s springboards as the only student-athlete at the meet to win a pair of individual events.

Freshmen Jordan Rzepka and Tyler Downs traded 1-2 finishes in the men’s springboard events, registering their first career collegiate victories. Rzepka won on 1-meter with the sixth-best score (410.65) in program history and Downs was victorious on 3-meter (his Olympic event this summer) with the 13th-best mark (394.20) in team history. Downs also posted the eighth-best score (391.25) in the Purdue record book on 1-meter.

Teagen Moon and Knueppel were part of both relay winners for the Purdue women.

The Boilermakers return to action Friday for a 5 p.m. ET co-ed dual meet at Notre Dame.