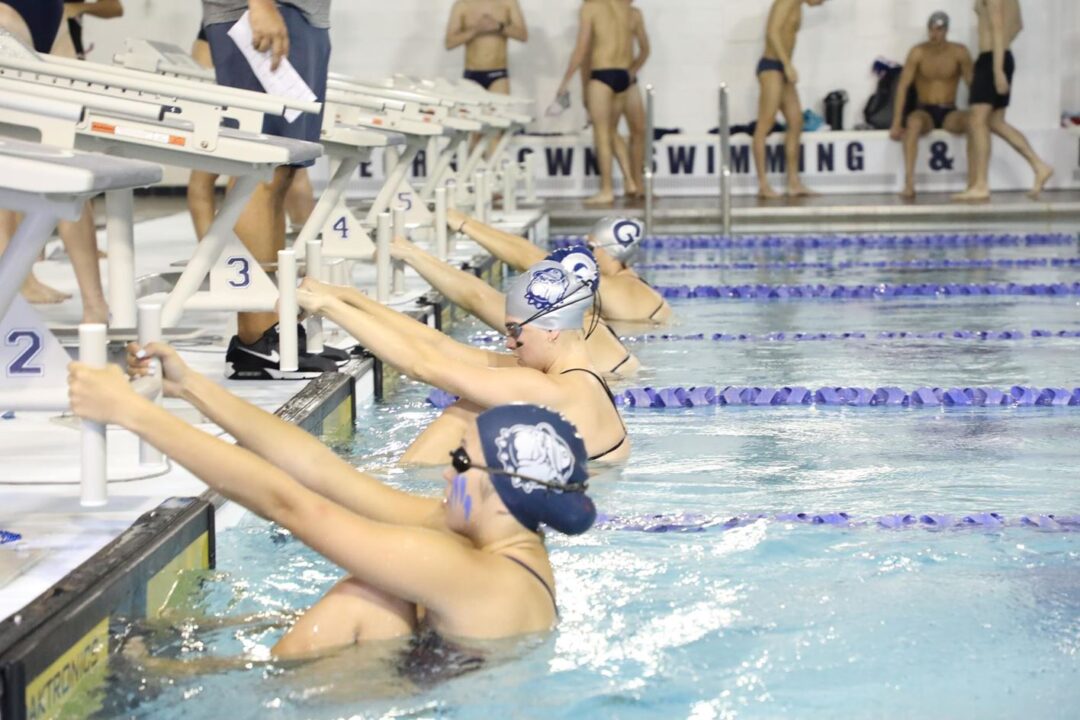 Tennessee will honor 17 student-athletes during a Senior Day ceremony before the meet at 11:45 a.m.

WASHINGTON – Racing for the second time in as many days, the Georgetown University’s men’s and women’s swimming & diving team swept Howard University on Saturday at Burr Gymnasium Pool in the District. Sophomore Kyle Maziarz broke Georgetown’s all-time record in the 1-meter dive with a score of 306.75 as the men’s squad topped the Bison 113.50-91.50 while the women’s squad won 123.50-80.50.

“It was a quick turnaround from last night’s meet with AU, but the energy in the building from our fans and Howard’s brought out some really great results,” Head Coach Jack Leavitt said. “I can’t say enough about how much fun the team had today and I’m really proud of how they stepped up.”

“Kyle works so hard and is incredibly tough,” Leavitt said about Maziarz’s record. “Watching him push himself at practice is inspiring to all of his teammates. I’m so happy for him; to break a school record in only his second meet is truly remarkable.”

On Deck
The Hoyas head north to take on UConn and NJIT on Saturday, October 23 in Storrs, Connecticut. The women’s squad will battle the BIG EAST host Huskies while the men’s team will compete against NJIT.

Despite dropping a close one to the Hoyas, 91.5-113.5, HU won six events overall while several Bison etched themselves into the school’s all-time list.

Howard opened the afternoon with a victory in the 200 Medley Relay, led by senior Miguel Davis, Jr. (Washington) and juniors Mark-Anthony Beckles (Chaguanas, Trinidad & Tobago), Miles Simon (Atlanta) and Arion Solomon (Fairburn, Ga.). For their efforts, they earned the third-fastest mark in program history, clocking in at 1:33.34.

Individually, Beckles won the 50 Free and 100 Free with times of 25.06 and 46.34, respectively. As a result, he sits 10th and sixth all-time in program history, respectively.

Simon earned first-place in the 100 Back, producing the third-best time in school history (50.96).

On the board, rookie Isaiah Swilley (Bourbonnais, Ill.) competed in the 1-meter dive where he registered the school’s fourth-best score with 244.58 points.

Overall, HU won three events inside Burr Pool and despite falling to the Hoyas, 80.5-123.5, several young Bison etched themselves in the program’s record books.

Spears competed in the 100 Breast where she finished runner-up, clocking in at 1:08.73. For her efforts, the Indiana native has the ninth-fastest time in program history.

Spears, alongside fellow classmate Alana Josey (York, Pa.), took part in the 200 IM where they placed second (2:13.25) and third (2:15.33), respectively. As a result, both Bison landed in the school’s all-time performance list, sitting fifth and 10th, respectively.

On the board, junior Teyana Johnson (San Antonio) finished runner-up in the 1-meter dive, scoring 243.23 points. For her efforts, she landed fourth in the school’s all-time list.