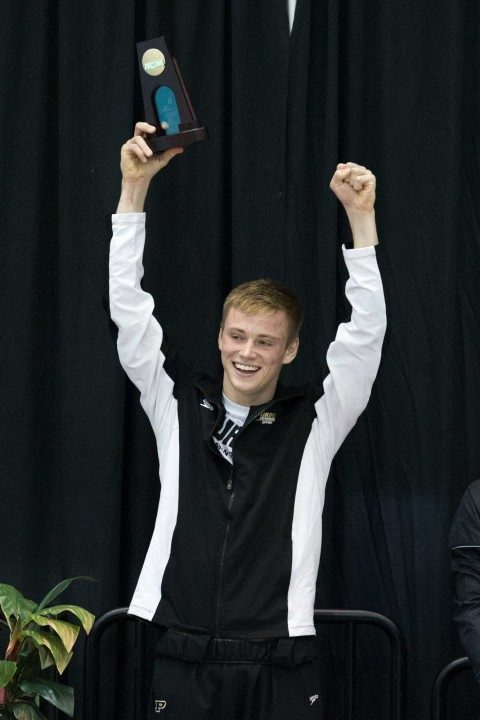 The Purdue Boilermakers added another male and female diver to their respective NCAA rosters, hitting a nation-high 6 divers with NCAA eligibility. Archive photo via Tim Binning/TheSwimPictures.com

Cox served as the Assistant Diving coach at the U of Nebraska and the head coach for Nebraska Aquatics diving for 4 years.

The Purdue Boilermakers added another male and female diver to their respective NCAA rosters, hitting a nation-high 6 divers with NCAA eligibility.

Morgan Meixner was 4th on 1-meter for women and Brandon Loschiavo 5th on 3-meter for men, both earning NCAA bids, though not yet reimbursement status. Steele Johnson took 3rd to stay hot after his runner-up finish a day earlier. Joseph Cifelli is still qualified from yesterday. For the women, Samantha Reese is now into reimursement status from her finish yesterday, and Emily Meaney is also qualified.

Kentucky’s Rebecca Hamperian won the women’s 1-meter event and earns reimbursement status after qualifying for an NCAA slot yesterday. Indiana stayed undefeated on the men’s side as James Connor won 3-meter over his teammate Michael Hixon, who won 1-meter yesterday.