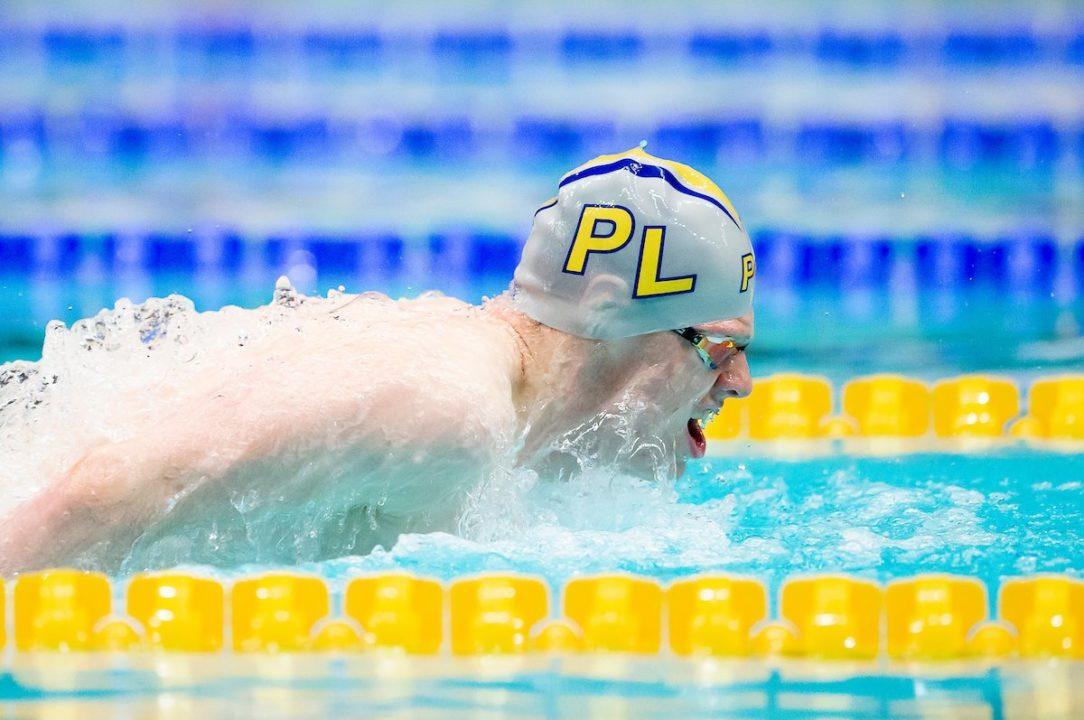 England's indoor swimming pools can finally open after having been under lockdown since March 20th, but one notable training base will remain closed. Archive photo via SWpix/Swim England

Schmidt explains she’s excited to continue her career as a pro, sharing that she believes she’s not done learning the lessons the sport has to teach her.

Isabella Rosa commits to staying in Pennsylvania to swim collegiately, announcing that she will be joining the University of Scranton this fall.

As we reported, England’s Secretary of State for the Department of Digital, Culture Media and Sport announced on July 9th that outdoor pools within the nation would be allowed to reopen from Saturday 11 July, with indoor pools allowed to begin reopening from Saturday 25 July.

However, Plymouth’s Life Centre, host to notable club Plymouth Leander, will not open until at least April 2021.

Per Radio Plymouth, there have been a number of issues requiring works over the last eight years, including ongoing water leaks in certain parts of the building. To rectify the issues, the pool surround and changing areas must be stripped down to their concrete layers in order for new waterproofing to be applied. Walls, ceilings, fixtures and fittings and several other facility components need to be repaired, resulting in the April 2021 open estimation.

Plymouth Leander served as the training base of Lithuanian Ruta Meilutyte when she won gold in the 100m breaststroke at the 2012 Olympic Games in London. At the time she was coached by Jon Rudd, who has since left to take on the role of Director of High Performance at Swim Ireland.

Energy Standard’s Ben Proud also used to call the club home and was based there in the summer of 2017 when he took gold that year at the World Championships in Budapest.

“We’re obviously very disappointed not to be able to reopen the Life Centre later this month. We know many people will have been looking forward to using the facilities again following lockdown restrictions.

“While the centre has been closed we’ve been able to do some more detailed investigation and survey work and the fact is we are looking at some issues that need to be sorted out as soon as possible.

“If we don’t carry out these essential repairs the issues will just get worse and ultimately put the long-term future of the building at risk. We have a duty to the people of Plymouth to give them the first-class facility they deserve and one they can continue to enjoy for many years to come.

“We know the huge inconvenience this will cause, which is why we have explored all options to get the work done in the shortest possible timeframe. A partial closure – trying to keep restricted areas open around the works – would add significant time and cost to the programme and be an unpleasant, disruptive and noisy experience for centre users.

“We want to get in, get the work done and get the centre open again so that people can get back to the sports and activities they enjoy. While the building is closed we will be taking the opportunity to make some additional improvements and enhancements to make sure this eight-year-old building meets the needs of today’s customers – including measures to make it fully COVID-19 compliant. We hope that customers will see some really positive changes when the centre reopens.

“The closure will clearly impact on our aquatics programmes but both British Swimming and Swim England are supportive of the works, which will improve the facility for swimmers and divers and help to secure the future of these sports in Plymouth.”

“As a regular host of British Swimming and Swim England events, the Plymouth Life Centre provides the stage for memorable moments for our athletes, coaches, support staff, supporters and all involved in aquatics sports. It is also the home of great swimming and diving clubs.

“We understand the impact that this closure will have on both the aquatics community of Plymouth and the general public who use the facilities and work in them – but we are sure the imminent improvements will help transform the Life Centre and provide positive, long-term benefits for the swimmers and divers who come through it.

“All at British Swimming and Swim England hope it is not long before exciting events like the British Diving Championships are taking place at the Life Centre once more, and we look forward to that time. In the meantime, both British Swimming and Swim England will work with Plymouth City Council to find ways to ensure diving and swimming continue to flourish in Plymouth.”

Along with the Plymouth Life Centre, which typically houses the club’s high-performance swimming program, squads practice at Plymouth College. With the former with an extended closure, more squads would be directed to the college; however, with social distancing restrictions in place, this makes the facility reduction even more difficult. Additional pools will be sought out, according to Plymouth Leander.

In the meantime, Laura Stephens, who competed for Great Britain at last year’s World Championships, has been training at the National Training Centre – Bath.