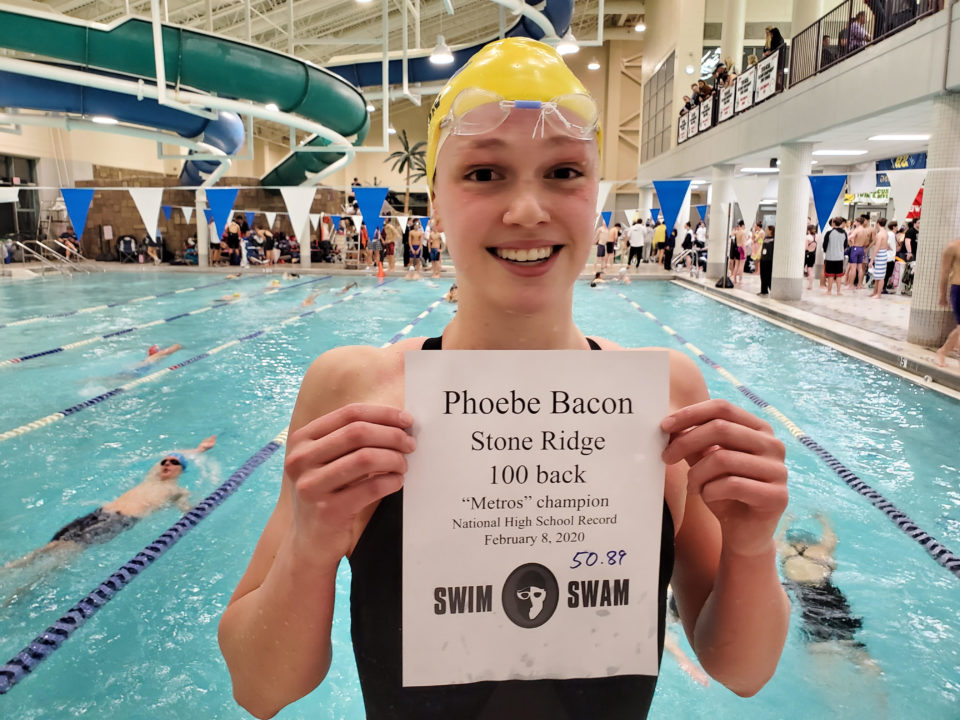 Phoebe Bacon won the 100 back and 200 IM at the 2020 Metro Championships in record-setting fashion as Stone Ridge and Gonzaga came away with the team titles. Current photo via Matt Rees

“What’s in the water at Stone Ridge?”

That’s the question swim fans from throughout the country must be asking about the Catholic school in Bethesda, Maryland. Its most iconic graduate is Katie Ledecky, whose swimming bona fides need no explanation. But a new chapter in the school’s swimming story was written at Saturday night’s “Metros” meet. The Gators accomplished something that eluded even Ledecky: a team championship. And they did so on the shoulders of two swimmers in particular.

Phoebe Bacon, a senior, notched a spot in swimming history by swimming 50.89, demolishing the national high school record she’d set in the 100 backstroke two weeks earlier (see her swim here and see her interview with SwimSwam here). And a freshman on the team, Erin Gemmell, delivered several commanding performances – positioning herself as the school’s next national standout.

Metros is consistently one of the fastest high school meets in the country – with highly accomplished swimmers energized by wildly enthusiastic fans. Not only did Ledecky swim there, but so have several other notables, including 2016 Olympian Jack Conger (Good Counsel), who broke both the 100 and 500 free national high school records on the same night in 2013. This year was no different.

Later, in the 200 free relay, Stone Ridge finished in 1:34.47 – taking nearly a second off an eight-year old meet record (see the race here). Gemmell’s anchor split was a speedy 22.63. And Gonzaga won the boys race in 1:24.64, just missing the meet record. Bernasek closed out the race with a 20.47 leg. (Gonzaga would also win the team title, by nearly 100 points, over last year’s champion, Georgetown Prep.)

Bacon and Gemmell aside (more on them momentarily), there were several other blazing swims. The senior winners were:

The swimming bench is always deep in the DC area, and this year’s Metros reinforced that tradition. The non-senior winners were:

But the most impressive underclassman was Gemmell. In addition to her relay swims, she won the 100 free (49.56) and the 200 free (1:45.96) (see the 100 here and the 200 here). While it seems inevitable that she will take down the Metros record in the 100 (Caroline McTaggart’s 48.75), it now seems entirely possible that at some point before she finishes her high school career she will also do something that many swim fans thought wouldn’t happen for long, long time: take down Ledecky’s national high school record in the 200 free (1:41.55). And if Gemmell’s name sounds familiar, it’s because her father – Bruce – was Ledecky’s coach at Nation’s Capital before she decamped for Stanford.

As for Bacon, she also won the 200 IM (see race here) in a record-setting time (1:55.39) – albeit a record she set last year (1:57.31). She will be attending the University of Wisconsin the fall – where she’ll be coached by Yuri Suguiyama. (He also has a strong Ledecky connection, having coached her in the run-up to her first gold medal, in 2012, before decamping to UC-Berkeley for an assistant coaching position.) Bacon is sure to thrive under Suguiyama, but right now she has her sights set on Olympic Trials, where she is one of the leading contenders to make the U.S. team. She’ll face extremely stiff competition (women’s backstroke may be more dominant than any other stroke for men or women) but with her Metros swim on Saturday night, her high school legacy is secure.

Wait for VA States in 10 days. There will be another 9th grader and a 10th grader pushing Gemmell and plenty of very fast swims.

Phoebe Bacon is a girl who likes athletic competition. She’s done other sports besides swimming. So, I think she’ll be ready for the pressure and excitement of the Olympic Trials.

The women’s 100 back is going to be one of the Races of the Meet.

This article doesn’t say much about Gonzaga, who won by almost 100 points…

Maybe because the boys meet was pitifully slow except Brett Feyerick’s 100 back. Not much glory in being the best of a bunch of slow teams.

why weren’t the kings back?

This article: Bacon is phenomenal.
Next Article: Balanced breakfast ideas.

I think I’m getting hungry.

if i could upvote twice…