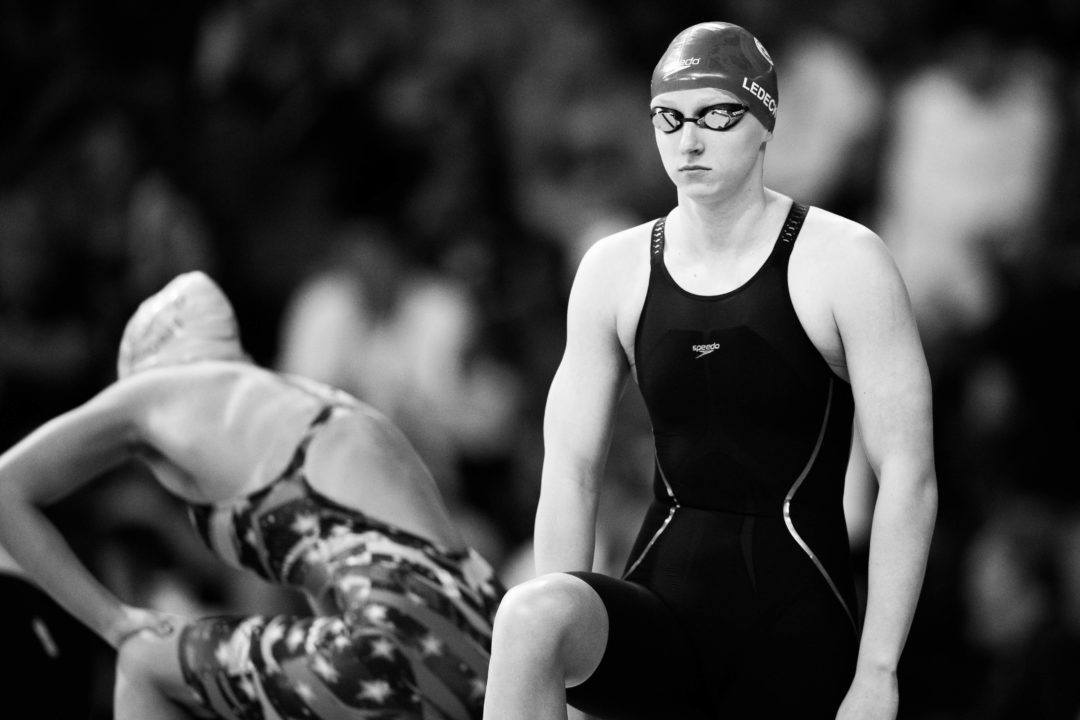 In 2012, at age 15, Katie Ledecky took the swimming world by storm by winning the 800 meter freestyle at... Archive photo via Mike Lewis/Ola Vista Photography

In 2012, at age 15, Katie Ledecky took the swimming world by storm by winning the 800 meter freestyle at the London Olympic Games. It wasn’t since 2000 that the United States had seen such a young swimmer reach and thrive at the Olympic games.

It was Michael Phelps who placed fifth in the 200 meter butterfly in the 2000 Sydney Games and then went on to break his first world record in the same event the following year. Both Ledecky and Phelps broke their first world records during the year in which they turned 16, which is partly why Ledecky’s early success and record shattering accomplishments have been so impressive thus far. But following her first NCAA Championships in Indianapolis this march and dominance in Rio last year, Ledecky beating the best swimmers in the world has not only become a common occurrence, but a routine.

During the 2016 Olympic games, Phelps spoke on the growth of the sport and talent of young swimmers throughout the world. Of Ledecky he said, “She’s somebody who is willing to dream as big as you can possibly imagine. That’s what you need. And that is what all kids should do.” Phelps had previously mentioned the work ethic of the young phenom at a press conference while training in San Antonio prior to the 2016 games but what is becoming increasingly apparent is that he is in awe of her ability to believe that she can do unprecedented things in the swimming world. When asked for his perspective on Ledecky, Phelps stated, “She is doing things that women have never done before because she isn’t afraid to think outside the box. She isn’t afraid to give everything she can possibly give. Her mind is open to everything.”

The video describing Ledecky’s ability to dream big can be found here:

The high praise that she has received from the most decorated Olympian of all time has only heightened the level of admiration that swimmers young and old have for Ledecky, who will be just a sophomore at Stanford come the fall. Ledecky, who is undefeated in freestyle events on the international stage, has cemented herself as the most dominant female distance swimmer in the world and the new face of United States Women’s swimming. More importantly, as Phelps discussed, Ledecky has broken down barriers in the swimming world that were previously never thought possible, and has inspired many young swimmers to dream as big as they possibly can imagine.

I believe Phelps was 5th in Sydney.

2
-1
Reply
ERVINFORTHEWIN
Reply to  We All Make Mistakes

He was 5th indeed in the 200 fly , first ever Olympic race for him

You are right! Made that correction.

You know, I’ve actually read an article on this topic that has some fairly good points to add to this claim (just speaking in terms of the percentage she wins by). https://www.google.com/amp/s/www.washingtonpost.com/amphtml/sports/olympics/how-katie-ledecky-became-better-at-swimming-than-anyone-is-at-anything/2016/06/23/01933534-2f31-11e6-9b37-42985f6a265c_story.html

Not saying I do or don’t disagree with this claim…but I’d be lying to say that I’m not biased here so I just won’t comment.

That’s correct – no medals in Rio. In singles she lost in the round of 16, and in doubles she and Venus lost their first game in the round of 32. Venus took the second spot in mixed doubles and won silver with Rajeev Ram.

You’re right I forgot the only way to measure dominance is winning Olympic gold not winning two grand slams at the age of 34 and 35 tying her with the greatest male tennis player of all time for oldest winner. Serena lost at the Olympics but she’s completely dominated since if you know anything about tennis you would know winning a grand slam at 35 requires more skill than winning Olympic gold

More down votes from people who don’t know anything about sports outside of swim ??

Serena should be part of the discussion has most dominating athlete and yes Olympic medals are not the measure of success. Federer has a case but what makes the Serena/Ledecky comparison better is the way Serena dominated her competition in her prime. (She still dominates when healthy now when she’s clearly past her prime). That is comparable to “margin of victory” for Ledecky. Also Serena’s serve even in her mid 30s is still amazing. Just like Ledecky she’s faster than a bunch of male pros.

Sure Serana has been dominant over her career and Katie is only starting hers. However Katie, over the last 2 years, has never lost a race in her favored events ie 400/800/1500. That’s like Serena never losing a match, just no comparison. IMO Katie is currently the most dominant athlete in any sport and when her career ends will be the most dominant athlete in history male or female.

That is not a fair comparison. In tennis, your opponent is actively trying to diminish your ability succeed. They can study patterns and techniques to be able to beat Serena. In swimming, the only way someone can beat you is to be better than you (which no one is in regard to Ledecky), but in tennis there are many ways to beat someone while being the inferior talent.

Ervin knows what u speak about . unfortunately , Serena didn’t have 3 or 4 Big World Records to her belt at age 19 . Thats pretty hard to beat i think ,,,,

While she didn’t win a medal in Rio, Serena has won 4 Olympics golds across three Olympiads, including winning both the doubles and singles golds in London at the age of 30. Serena won her first Grand Slam in 1999 at 17 years old and is still winning Slams today. Let’s see what Ledecky is doing at 35 before we talk comparisons. In the meantime, let’s just all admire the barrier-breaking talent and poise of both of these incredible women and be thankful we get to witness their dominance. Sidenote: The Olympics are not at all equivalent between tennis and swimming. The Olympics are more of a bonus for tennis players compared to Grand Slams, while the Games are the… Read more »

Olympics doesn’t mean that much to tennis players. Probably even less than a master 1000 Event

It really does mean nothing. Roger Federer only has two Olympic medals so would you say he can’t be the greatest ever? Utter stupidity from people saying Serena isn’t the most dominant woman in her sport cause she didn’t win gold in Rio

The original point was NOT about Serena being the most dominant woman in tennis. It was about being the most dominant athlete in ANY sport. Which Ledecky apparently has some valid statistical claim to being. Now, I’m not a believer this this statement ‘proves’ anything other than level of competition. Maybe she’s just ahead of her time. Heck, if I had swum with Johnny Weismuller, maybe they would have said that about me! My personal feeling is Ledecky is a swimming hero; she has a great attitude; she is dominant in today’s pool. And I just LOVE the way she does what she does!

I think there’s something to be sad about Katie Ledecky being a correction for a lull-period in women’s distance swimming. I think maybe Kate Ziegler and Katie Hoff and Dagny Knutson never quite fulfilling the potential they showed when young for one reason or another meant that maybe the 400/500/1000/1500/1650 records weren’t quite what they could have been. I’d venture a guess that Kate Ziegler could’ve gone sub-4:30 in the 500 free if she’d swum in college, for example.

I think you mean “over-correction,” Braden.

Serena is statistically the most dominant athlete in her sport by a large margin. Serena dominates everything in her sport Katie dominates one thing distance freestyle.

Serena dominates Tennis – Katie could dominate in different strokes if she truly wanted to ( 400 IM ) – different world my friend .

Serena lost and has lost before. Ledecky won and has always won.
Simple enough for ya?

I think is a real hard thing to claim just yet. Maybe after it is all said and done, but not yet. Although this is a swimming website many other athletes have done things thought to be impossible in the prospective sport. More dominant then Phelps in swimming, she doesnt have that versatility. As far as Female Athletes now, I think 100 percent goes to Simone Biles. She fell on an event and got second, more medals then any girl ever. Talk about margins of winning. Not only was Biles’ margin of victory the biggest ever in women’s gymnastics, it’s larger than the margins of victory from 1980 to 2012 combined. Just saying

Biles was one of the most dominant Us athlete in Rio ( with Katie of course ) . Very Impressive feat she delivered – might well not be matched in along time .

Biles got third in that event. And it’s impossible to compare margins of victory in gymnastics given recent scoring system changes.