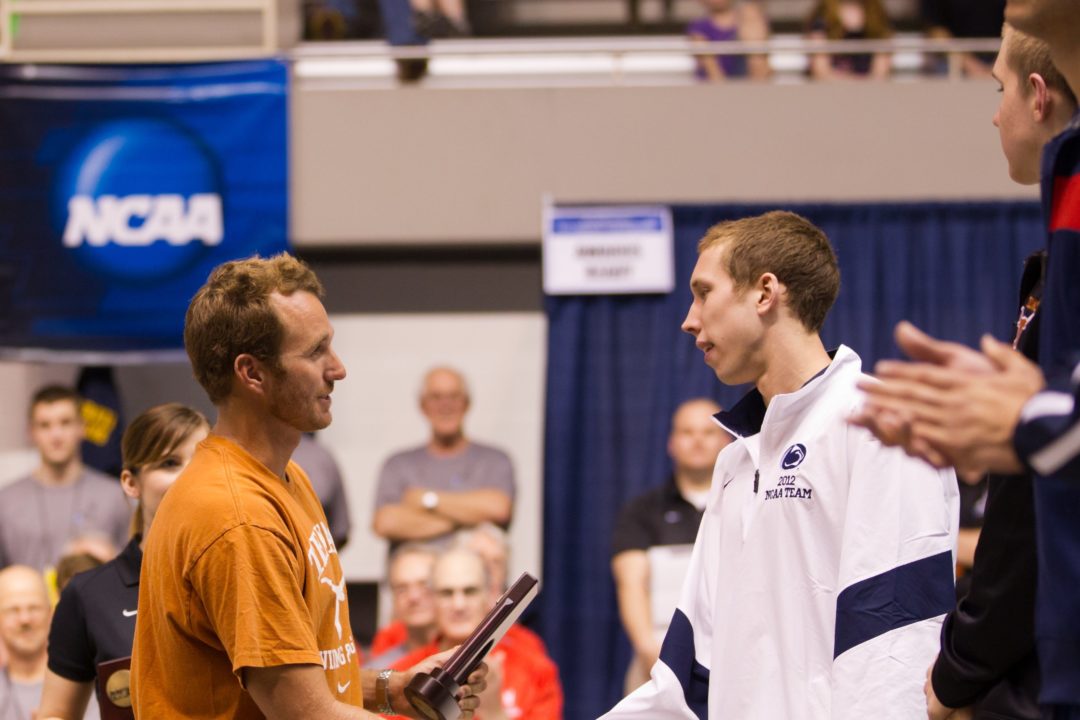 Former Harvard head coach Tim Murphy has been named as the new head coach at Penn State, taking over the combined men’s and women’s programs from John Hargis, who left to be the associate head coach at his alma mater Auburn.

Before going to Harvard, Murphy was the head coach of the Wilton YMCA Wahoos for 13 years as they won 7 YMCA National Championships.

The Penn State men and women, while seemingly loaded with talent, have come up a bit short of expectations the last few years. The men were 8th at Big Tens in 2013, while the women were 3rd.

The women’s team placed 29th at NCAA’s, and will return sophomore Alyson Ackman, who was the Big Ten Champion in the 200 free last year as a freshman. The men’s program returns most of their 20th-place team from NCAA’s, including All-Americans Nate Savoy and Sean Grier, and will hope to regain the services of Shane Ryan, who had to sit out during championship season last year.

So I presume this means Murphy is done at Crimson Aquatics?

that would be a rather long commute

glad you said it Swimmer….kind of a weird question!

Murphy is a very good college coach and I wish him the best of luck in his new position. One of Tim’s good qualities is that he delegated responsibility to the club coaches at Crimson and rightly so focused on the college team. Mike, Kyle and Carl have all produced consistently excellent swimmers and will no doubt continue to do so in the coming year(s).
The impact on Crimson Aquatics will be minor, I predict. The Harvard team is more likely to be impacted by the change but Kevin is well known, and well liked by many of the Harvard swimmers and will have a chance to show what he can do as a head college coach.

Harvard smoked the 200/400 free relays at Ivy’s last year…this should be a good thing for Shane Ryan and the PSU men. They could have 2-3 relays top 8 this year at NCAA’s if all are eligible and all are healthy. Hopefully Ryan has learned his lesson!

Now…if only the PSU Aquatic’s Director was more swimming friendly…may I remind him that his salary is paid by athletics, and his job is to help Murphy build a championship program? There has been some confusion in the past…

Ryan had a death, if not two deaths (i could be wrong) in the family last season, so yeah he did learn his lesson i guess? He struggled emotionally and his grades and swimming followed. He will be mentally strong now and knows his goals for the season, as well as what to expect academically and with a new coach. Please do not say things on here that are offensive as swimmers read this. Ryan and the rest of the team are awesome, i expect big things from these men and women! GO STATE!

Ummm… closing all the Nat indoor pools to everyone except the swim/dive team for 4 hours each weekday afternoon and 2-3 hours every morning seems pretty swimming-friendly to me. In fact, the pools are reserved for the varsity programs for more hours every week than the number of hours (20) the NCAA allows the team to practice in season. And no, the aquatics director’s job is not to help the head varsity swim coach build a championship program. Rather, it’s to offer a broad range of aquatics programs for general students, faculty, staff and community members in balance with the needs of the varsity team… all while maintaining a safe, clean and functional aquatics facility. Yes, he’s paid by the… Read more »

Insider, “””Ummm… closing all the Nat indoor pools to everyone except the swim/dive team for 4 hours each weekday afternoon and 2-3 hours every morning seems pretty swimming-friendly to me.”” Closing the pools for that amount of time is a necessity and not a gift, and is the very least PSU can do for its varsity swim/dive teams. “”In fact, the pools are reserved for the varsity programs for more hours every week than the number of hours (20) the NCAA allows the team to practice in season.”” You aren’t fooling anyone with this faulty logic. The reason it is reserved for that many hours is because it is impossible to train all 60+ athletes at the same time in… Read more »

I would assume that these issues were at least hammered out at least close to Coach Murphy’s satisfaction during the negotiating process. Harvard certainly didn’t give him free reign. He’ll handle it.

“the BEST swimming conference in the country”

So many insightful and debate inspiring comments in my post and THAT is the only one you commented on??

Big Ten fastest and deepest in the country this year. Read it and weep. This is what PSU is up against and they need all the help they can get, from athletics, REC, IM, Community, etc.

Murph will get his way and I suspect the aquatics director will walk the first time he tells Murph they can’t throw med balls on deck or prop open doors for fresh air. I wish I could be there when they square off.

Contrary to what you might believe, fielding a championship varsity swimming program is not the primary mission of the McCoy Natatorium. Rather, it is to serve all aquatics constituents of the university community as safely, cleanly and functionally as possible. The varsity team needs must be balanced with the revenue-generating public/rec program needs. The solution to overcrowding at the Nat is not to shut-out the public/rec programs in favor of the varsity team, but rather to build a new facility for the varsity team. You and I agree on that – it is desperately needed. But until someone writes that $45 million check, the varsity program must continue to “share” the Nat. Hopefully the new varsity coaching staff will accept… Read more »

So, from what you are saying, was there a power struggle between the head coach and the aquatics director last year?

Guess he couldn’t stand losing to Princeton the last 5 years!