Peaty On Historic Gold: “I Haven’t Felt This Good Since 2016” 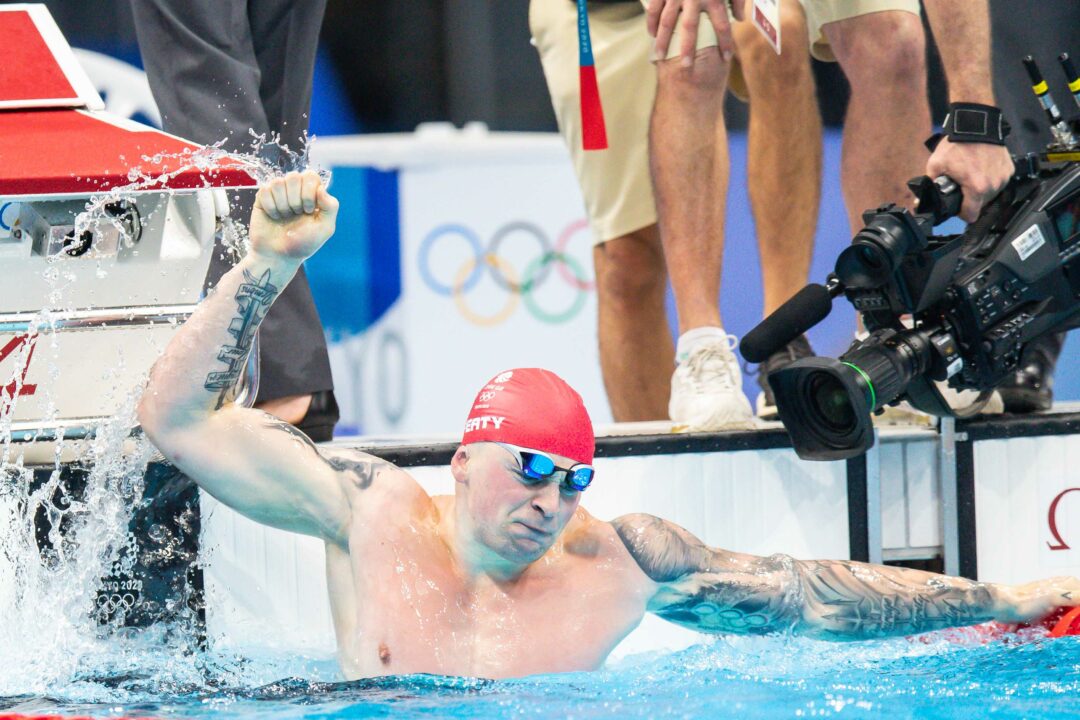 In reaching the top of the podium as he did in Rio, Adam Peaty became the first British swimmer ever to successfully defend an individual Olympic title. Current photo via Jack Spitser/Spitser Photography

Clocking a time of 57.37, the 26-year-old father of one touched in the only sub-58 second mark of the field, beating out Dutchman Arno Kamminga and Italian Nicolo Martingenghi who collected silver and bronze in performances of 58.00 and 58.33, respectively.

In reaching the top of the podium as he did 5 years ago in Rio, Peaty became the first British swimmer ever to successfully defend an individual Olympic title. Additionally, his outing here in Tokyo now checks in among his best-ever, ranking 5th with Peaty owning the top 16 performances of all-time in the event.

Peaty was visibly elated with his victory, showing more raw emotion than Rio, Gwangju or any other major international performance.

On his triumph, the Mel Marshall-trained Peaty said, “I haven’t felt this good since 2016! It just means the world to me.

“I thought I had the best possible preparation of my life, but then you throw in morning finals and you throw all that out of the window. That’s really what it takes to be an athlete – it’s not who’s the best all year round, it’s who’s the best on the day, who’s the most adaptable.

“This has closed a chapter for me, it was unfinished business. I want to say thank you to the nation for being behind me the last five years, thank you to my family, my gorgeous partner, my gorgeous son and my whole family back home, they’ve been with me every step of the way.

“This victory wasn’t mine. It was the British Swimming team’s, it was my family’s, it was my friends’, and those people I had to put to the sidelines for a moment because I knew it was going to take absolutely every bit of energy to get to this point.”

Peaty will compete as at least a member of the men’s 400m medley relay and may also be on the mixed medley, depending on the tactic of male/female order that the GBR coaching staff selects.

3 more years, i bet he could get gold in Paris

I thought he’d break the world record for the final time in his career in Tokyo, maybe it was morning finals which seems to overall make swims slower than they could be (no matter what u do your body is not fully warmed up and awake in the morning, humans perform better later on in the day) but if it wasn’t morning finals then I don’t think he’ll go faster than a 57.3 again (he’ll probably prove me wrong) so it just depends if Kamminga can drop .5 seconds in 3 years which is of course definitely possible

I’m not so sure. Arno will be hungry and Peaty was clearly burnt from all the pressure and expectations.

It’s a 3 year cycle. He can maintain, but the world will get a little faster is a given. I still think he could do it again in 2024 so long as he manages his training cycles & doesn’t burn out.

Maybe he could try that USRPRSTRST thing just for gigs.

He’s still the favorite but I’m wondering where he finds the motivation at this point. He’s far and away the goat with what is the most impressive individual resume of any swimmer of any event ever save for MP in the 2 fly from 01-11. The three peat is nice but it’s hard to keep going for just that

I’m curious on where everyone stands with Peaty as far the greats go. He’s obviously the greatest 100 breast swimmer of all time, but what about “great breaststroker of all time”? I’m hesitant to give him that title since he doesn’t have an elite 200.

Kitajima was a double 100/200 breast champion and held WRs in both events.

With the increased specializing in individual events, I’m not sure we’ll ever see a swimmer dominate the 100/200 breast again.

I agree that Kitajima’s 100 and 200 double is still the more impressive Olympic feat (just going by the numbers), but I think Peaty’s legacy needs to be seen beyond just the Olympics. At Euros, WCs and Commonwealths he’s been overwhelmingly dominant. If you consider Peaty’s 50 success, you could argue that shows similar range (just in the other direction) to people who have done 100 and 200 doubles. Then there’s the margin of dominance to consider as well.

So yeah, I agree we should hold our horses, but I think Peaty’s status needs to be seen holistically, and not just when it comes to the Olympics.

There’s no doubt in my mind that Peaty is the goat. Like you said, Kitajima had the luxury of swimming in an era where the two events weren’t nearly as optimized. Now, you can either be super elite in the 100 or 200, they’re just two different events

I think long haulers like Peaty and Ledecky would benefit from taking a year (or at least skipping the upcoming World Champs) just to recharge. It’s a lot more difficult to keep the pedal to the metal all the way to Paris. There’s nothing they need to prove in 2022.

*metal to the pedal