Many thanks to Shvoong for sharing their coverage of 2015 European Short Course Championships with SwimSwam. After breaking the oldest World... Archive photo via Tim Binning/TheSwimPictures.com 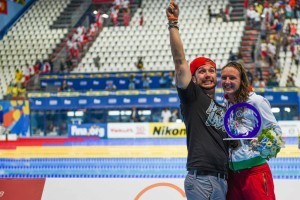 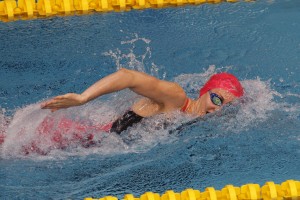 Many thanks to Shvoong for sharing their coverage of 2015 European Short Course Championships with SwimSwam.

After breaking the oldest World Record on the books on Friday at the 2015 European Short Course Championships, Italian Gregorio Paltrinieri hinted that the best might be yet to come at the Duel in the Pool next weekend.

“I dunno, it’s really unexpected,” Paltrinieri said. Three days ago, Paltrinieri said that he was primarily in full training, and that he’s just begun a taper this week with an eye on the Duel in the Pool, not necessarily these European Championships.

And yet, he still swam a 14:08.06 in the 1500 free and by two seconds broke Grant Hackett’s 14-year old World Record in the event: the oldest standing by roughly seven years.

The Italian seemed elated with his performance, and while two straight weeks of travel can put a toll on a swimmer, Paltrinieri’s comments indicate that he was expecting faster swimming in Indianapolis next week, which puts this record again on notice just 7 days from now.

At the Duel in the Pool, Paltrinieri will have a chance at re-breaking his own record, which is a new twist on this year’s meet. Historically, both the men and the women have race the 800 at the Duel.

I think he will challenge the LC WR next year.

It would be way cool to see a 13:59 some day and Paltinieri has the best shot of doing that.

Having watched Mr. Smith’s 500 and read about his 2K earlier this season, I would love to see what he could do in a tapered and shaved 1500 SCM.

Its cool he broke the record but why does his taper length matter? I know distance swimmers who swim best on a 3 day taper… and sprinters who take a 1.5 month taper. I don’t really care how he did it. Hats off to him that he did.

I’m not sure I understand your point. He mentioned his taper length to explain why the record was unexpected. I’m guessing that, in the process of becoming a world class swimmer, one learns what kind of rest one needs for the best performance. He knows his body well enough by now to know whether or not a one week taper is enough, and apparently he believes he needs more than a week.

Honestly, I’m not sure why the taper lengths of other swimmers matter.