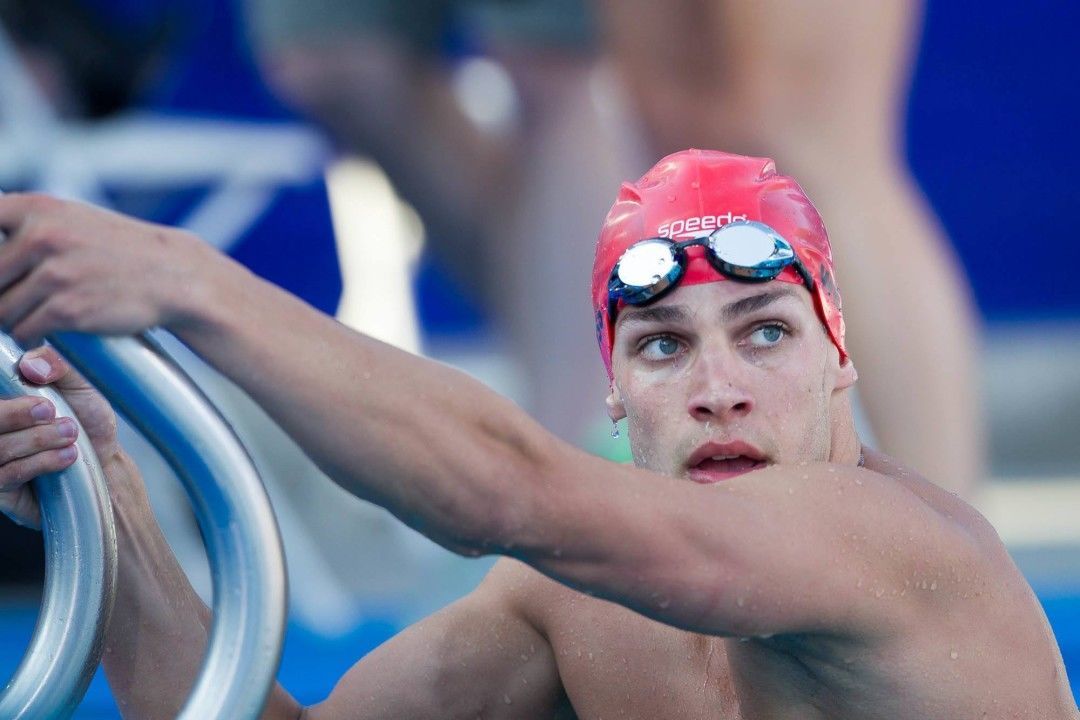 Wisconsin's Michael Weiss pulled out of the 400m IM final to focus on the 200m free on Day Two of U.S. Winter Nationals. Archive photo via Tim Binning/TheSwimPictures.com

While there wasn’t one scratch out of the finals session on Day One of 2015 U.S. Winter Nationals, Day Two told a slightly different story.

Wisconsin’s Michael Weiss, who posted the second-fastest 400 meter IM time of the morning with 4:23.94 (behind Chase Kalisz’ 4:18.40), opted out of finals. Weiss also made the championship final of the 200m free (he was fourth with 1:48.73), which is where he will focus his efforts in tonight’s final. Weiss’ absence allowed Michigan’s Stephen Holmquist to move up to the A final with this prelims swim of 4:27.20. Eduardo Solaeche of Gator Swim Club pulled out of the B final after finishing 15th this morning. Both Brendan Feehery (Lakeside Aquatics) and Robert Hill (Chena Swim Club) will now contest the B final.

In the men’s 100 breaststroke, BJ Johnson pulled out of the B final; he had been 1:02.08 in prelims for the tenth qualifying spot. Jonathan Leopold of The Olympic Club moved into the consolation in his place.

The only swimmer to give up her space in finals on the women’s side of the meet was Elizabeth Beisel of Bluefish Swim Club. After turning in the morning’s top time in the 400m IM (4:41.40), Beisel tied for 16th in the 200 free with Emma Nordin of Carmel Swim Club (both 2:01.72). Beisel gave her spot to Nordin in the B final in order to focus on the 400 IM.

The norwegian swimmer Henrik Christiansen should be on notice also. I nipped a 4th in 800free in kazan. He drops his Pb by almost 15sec ,14.23.5 how many 19yr old have done that? A true medal contender come Rio.

Come on, Anne, answer the man!