Pac 12 Mid-Season Analysis: No Surprises at the Top 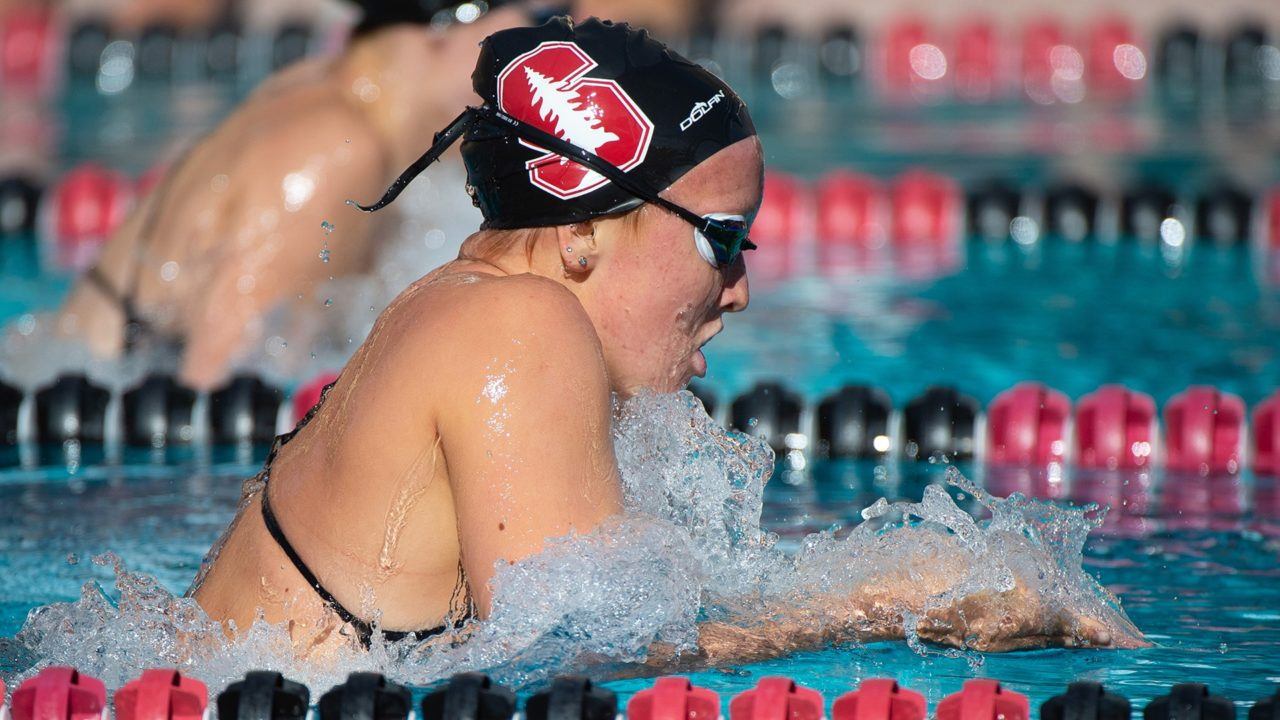 Now that all the major mid season invites are complete, pretty much every team in the country has had a... Current photo via Stanford Athletics

Next up: the Pac 12. Last year the Stanford women took a comfortable 1776.5-1487 win over Cal. Cal won the men’s meet easily 971-769 over Stanford. This year a repeat performance seems likely for both teams. A win this year would be the second in a row for the Cal men, and a third straight for the Stanford women

Stanford lead the current Swimulator projection with 1412 points, 287 points ahead of 2nd place Cal’s 1125. This is actually much larger than Stanford’s lead at this point last season when they held a 66.5 point advantage over Cal (1336.5-1270). At conference Stanford put up 186.5 more swimming points than the Bears and 123 more diving points to win handily.

Stanford’s point increase of 202 swimming points at conference from mid season last year was helped by a few factors. Simone Manuel didn’t swim during the first half of the season so she scored 0 points in the mid season projection. She scored 92 at Pac 12’s. Stanford also didn’t have a time in the 800 free relay mid season, so the 64 points Stanford got from that event were all net gain from their mid season projection. Those two things alone accounted for 156 of their 202 points gained. They don’t have a Simone Manuel coming back this year and they have a time in all 5 relays, so a better baseline for their improvement from last season is the remaining 46 points they gained, a more modest total.

As to who actually wins this meet, how much Stanford gains or loses is unlikely to matter. Yes, they probably won’t pick up 200 points again, but they are so far ahead of Cal that, barring a catastrophic Ella Eastin and Taylor Ruck tandem bicycle accident, they won’t be caught. Stanford return more diving points than Cal and were noticeably flatter than Cal at their mid season meet-increasing the chances Stanford drop more from their seeds when they taper.

Cal should pick up some points. In January they’re adding Isabel Ivey the high point winner from this month’s Juniors East. Amy Bilquist should get healthy and improve her projected 51 points -she scored 80 last year. Cal’s problem is that they are already projected to score really well in most of their areas of strength and they’re still far behind. They have the top time in 4 of the 5 relays and are 2nd in the 5th one. Abbey Weitzeil, Katie McLaughlin, Keaton Blovad, and Robin Neumann are already projected to score 80+ points. Not much room to gain there. I don’t see a way the rest of their roster can find 200 more points.

Both teams will likely treat this meet as a nationals qualification/rehearsal meet rather than as an actual goal meet. They’re ranked #1 and #2 in the country. They have their sights on bigger things.

USC are ahead of where they were at this point last season when they had 1003 projected points. The reason the other teams can expect to be competitive with the Trojans is that USC actually scored 185.5 points fewer at conference than projected at mid season whereas Arizona St gained 87. USC swam more than one suited meet in the fall season, so it’s a reasonable assumption that their seed times are pretty good again this year and they will drop a few places when other teams taper.

Arizona St are a bit further behind USC than they were at this point last year, but they should get a boost in the second half when former NCAA 500 record holder Cierra Runge is finally allowed to compete. Still, Arizona St’s diving advantage is smaller this year, so a repeat 3rd place finish might be tough.

Arizona are also lurking. They have 26 fewer points than they were projected to at this point last year. Last year they under performed their projection by 125 points. If they can just hold serve this year and USC drop off again, 3rd could be theirs.

The men’s meet appear’s on track to look similar to the women’s meet, but with a team swap at the top. Cal project to 799.5 swimming points, 150 more than Stanford’s 649.5. Cal also return 82 diving points. All of Stanford’s scoring divers graduated last year though freshman Connor Casey has looked pretty good. Cal picked up over 100 points at this meet last year vs projection while Stanford gained only 52, so history favors the Bears as well. Cal have the top seed in 13 of the the 18 swimming events including all 5 relays.

There is some room for Stanford to make up ground. Abrahm Devine is seeded to score only 34 points. While he only scored 40 at this meet last year, he did score 46 at nationals, so the potential exists. Grant Shoults was out most of the fall and projects to 0 points. He scored 42 here last year.

Cal are a consensus top 2 team in the country. Them being big favorites in their conference is unsurprising. If Stanford have a great weekend and Cal are off, maybe this will be close, but it’s hard to see Stanford actually pulling out a win. Stanford are too much of a distance focused team. Their top 4 events by projected points are the 1650, the 500, the 200 breast, and the 400 IM. This isn’t a team with tons of great sprinters waiting to upset Cal’s relays.

Arizona look well positioned to compete for the 3rd spot after most of USC’s diving points graduated last year. They have a 69 point advantage in swimming points, but the Wildcats dropped 100 points off their projected points total at Pac 12’s last year. They will need to avoid doing that again to beat the Trojans this year. USC dropped only 8.5 points from their mid season projected total last year.

Get the University of Tampa to submit their invite results to USA Swimming and I’ll write it tomorrow. Until they do, I’m waiting. If they delay long enough, I’ll do it without it, but it will be annoyingly incomplete and less useful/insightful than it could be.

Maybe it just happened, or we’re talking about different invites, but it appears all of the times are in. Everything from St. Leo and Tampa seems to line up on USA Swimming and CollegeSwimming.

They are there now. Finally. I have no idea why it was so delayed, and yes, I’m as annoyed as you are about this delay. When datasets rely on a large group of decentralized people to submit things, sometimes everything isn’t like clockwork.

I’ll do a D2 post in the next couple days.

” . . . barring a catastrophic Ella Eastin and Taylor Ruck tandem bicycle accident . . .” That made me laugh out loud.

What happened to USC? With great facility and recruiting base. Seems they should be more in the hunt?

Costs of attendance is a huge factor preventing them from building depth on the roster. It’s over 70k a year now. Stanford is expensive but has an almost fully funded endowment so lots of financial aid for everyone

yeah, schools are never in equal playing field with academics or money …. stupid question but this not a problem for football…. just kidding, life is not fair.