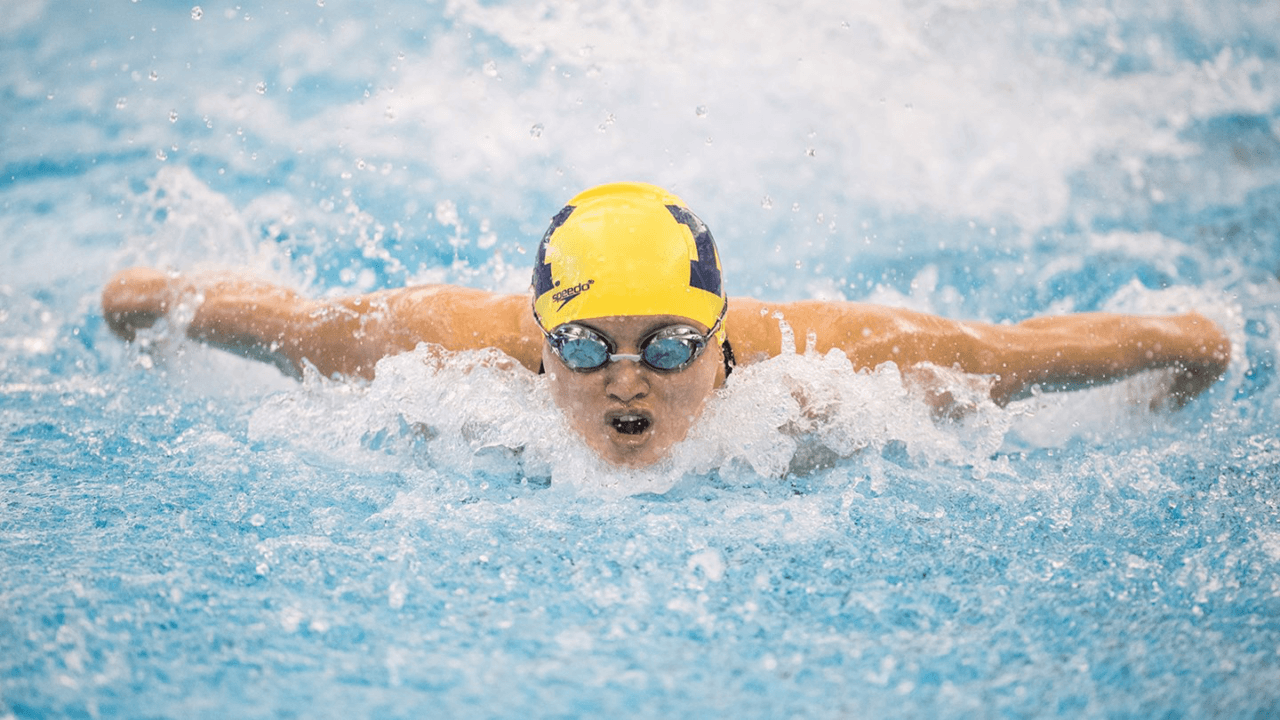 Stanford still leads handily with unanimous #1 votes, but the trio behind them are as close as can be. Archive photo via Michigan Athletics

Our official rankings up top haven’t changed, but a closer look at the ballots show teams 2 through 4 closer than they’ve ever been in our women’s ranks.

Michigan and Texas are bearing down on Cal for the 2nd spot, getting one second-place vote each. Stanford still leads handily with unanimous #1 votes, but the trio behind them are as close as can be.

There’s a clear-cut dropoff after the top 4, with the next five teams sitting in the top 10 on all five ballots. Things get real fuzzy after 10th, with a lot more variation between different ballots.

Anna Hopkin is bona-fide, and she’s pulling the rest of the Razorbacks up with her. Don’t forget that the Hogs have an NCAA Champion diver, Brooke Schultz, on their roster. She won the 3-meter last year as a freshman. -BK

Anna Hopkin is likely a top 3 threat in the 50 and 100 free come March, and Brooke Schultz is a fantastic diver. The Razorbacks have a nice crop of sprinters, including freshman Kobie Melton, and Hopkin might be enough to inspire a scoring relay or two. -KO

Arizona is starting to show some things under the Augie Busch era. Don’t forget the Busch pattern though – going for all qualifying times mid-season, and training through conference -BK

Even without head coach Greg Rhodenbaugh on deck (and still no information about a return), Missouri men and women swam very well mid-season. -BK

Florida is rebounding rapidly to launch the Jeff Poppell era in a hurry. The team is diverse, with quality in most areas, and deep, with multiple scoring swimmers in some events. Their big hole right now is the sprint freestyles. That’s crucial at NCAAs. -BK

Florida is definitely capable of a strong year with a top 20 finish. -KO

Gary Taylor is definitely doing good things with the Auburn women, who have looked pretty strong in duals. -KO

Beata Nelson alone could push Wisconsin into the top 20 at NCAAs. Some relay scoring is icing on the cake. -BK

Yuri Suguiyama looks to be a good fit for Wisconsin, and besides the obvious heroics from Beata Nelson, Emmy Sehmann has been a solid sprint presence. Freshman Lillie Hosack has already found another gear after a plateau her senior year of high school, and it’ll be interesting to see how this team molds under Yuri with a new fire to push towards more national relevance. -KO

Beata Nelson is currently accounting for a perfect 60 points in our Swimulator. That’s not entirely sustainable, though Nelson is certainly a 50+ point swimmer. The Badgers’ NCAA finish depends on how high Nelson can carry her four relays. -JA

Doesn’t look like Eva Merrell is going to swim this year. The freshman class is still in good hands with Dakota Luther and Olivia Carter, but this roster has a lot of work to do to challenge for the top 10. -JA

Me last Power Rankings: Watch Asia Seidt, who has been quiet so far but usually goes off at a mid-season invite.

Me: breaks arm patting self on back -JA

Virginia didn’t seem to really get after their mid-season meet, likely saving the big explosion for ACCs. -JA

Todd Desorbo is keeping his cards close, and UVA seems to be saving their big swims for ACCs and then the big show in March. Which means we are probably under-ranking them, but they could definitely wind up catapulting into the top 8 or so come March. -KO

It’s way too easy to forget that the Golden Gophers will score 50-some diving points this year. They’ve currently got one of the best sprint breaststrokers in the nation in Lindsey Kozelsky, and they should well outscore their projected 10 relay points – they scored 76 last year and return three-quarters of their legs. -JA

Erica Sullivan is going to be back — good. Courtney Caldwell is back, but wasn’t near her bests yet — good, could be bad, unclear at the moment. An on-form Caldwell means a dependable medley relay lead-off, which guarantees Louise Hansson can throw down an absurd fly split. -KO

It’s hard to trust USC after a brilliant regular season regressed into a lackluster NCAAs a year ago. Louise Hansson can’t swim everything. Well, she obviously can, she just can’t score in everything at NCAAs. Still, 10th is much lower than this team’s potential. -JA

NC State is back in a big way. The sprint relays look great, including a nearly straight-21 200 free relay. Sirena Rowe (21.7 on that relay) is going to be a massive weapon for a team that keeps on rising. -JA

IU needs a backstroker to apparate, and their freshmen have to step up if their free relays are going to make an impact come March. -KO

They still don’t have much going on in the relays, which is their limiting factor. Individually, though, they’ve got a decent group of scorers. Is Lilly King the Aaron Rodgers of college swimming – her brilliance continually carrying a roster with its share of holes into the top 10? -JA

Outside of Sydney Pickrem, A&M hasn’t looked great. But we knew this roster would take some time to reload, and the Aggies are consistent enough at NCAAs that it’d be reactionary to drop them too far. -JA

As good as Tennessee looked mid-season last year, they’re projected to score almost 70 more points this year. If they can keep the relays from last year’s disasters (a DQ and a wrong-stroke swim), they should be a top-5 contender -JA

Nikol Popov‘s resurgence is massive for Tennessee, and their sprint free group is deadly. -KO

A good roster with not much turnover, but Louisville doesn’t look as great as they did last year. Maybe that’s a change in focus that’ll pay off at NCAAs; maybe not. For now, I have them narrowly behind Tennessee. -JA

Grace Ariola is just a beast, and although Texas hasn’t been super sharp at NCAAs in recent memory, I think this is the year things come together. -KO

Don’t get me wrong – Texas’s relays will be great come March. But they’re projected to score a nation-high 172 relay points in our Swimulator, and I don’t think they’ll quite live up to that high standard, especially with some NCAA rookies swimming key legs. -JA

Michigan is so deep right now. They lead our Swimulator projected scores, and both Miranda Tucker and the Wolverine relays have good chances to move up from those projections. -JA

Maggie MacNeil is their headline this year, and they already have proven stars in Siobhan Haughey, Miranda Tucker, Rose Bi, and Catie Deloof — there is really not much to separate Michigan, Cal, and Texas right now. -KO

It’s tempting to shuffle the top 4, but with Amy Bilquist getting healthy and Isabel Ivey joining Cal for the spring semester, the Bears still have a lot of upside coming their way -BK

Amy Bilquist was back for Cal, which definitely helps their case — a lot. A healthy and fast Bilquist, paired with Abbey Weitzeil and Katie McLaughlin, who have both been on fire, is fantastic. Plus, getting Isabel Ivey for the 2nd semester is an immense addition, and if things click, she’s the kind of Seliskarian talent that really holds a program together. -KO

Unlike Texas, Cal outperformed their mid-season point projections last year. Isabel Ivey is an impact addition, especially after some lifetime-best swimming at Winter Juniors. Also, can we draw attention to the fact that Karl just used the word “Seliskarian”? -JA

Stanford’s got a deep roster of swimmers, most of whom are safe best to score more at NCAAs than they are currently projected. I wouldn’t be surprised to see Taylor Ruck and Katie Drabot have huge March explosions. -JA

No, they haven’t been as dominant as they were with Olympic champions Simone and Katie and Lia at the helm. And without unsung sprint/stroke heroes Janet Hu and Ally Howe, there are holes here. But similar to Eddie Reese and his Longhorns, I cannot doubt Greg Meehan and his… Trees. There’s too much talent on this roster! -KO

TN BIG LADY VOL MACHINE WILL NOT BE STOPPED…we gonna kick kneecaps and finish on the trophy stand TOP FOUR..it will happen…just you watch…suckers!!!