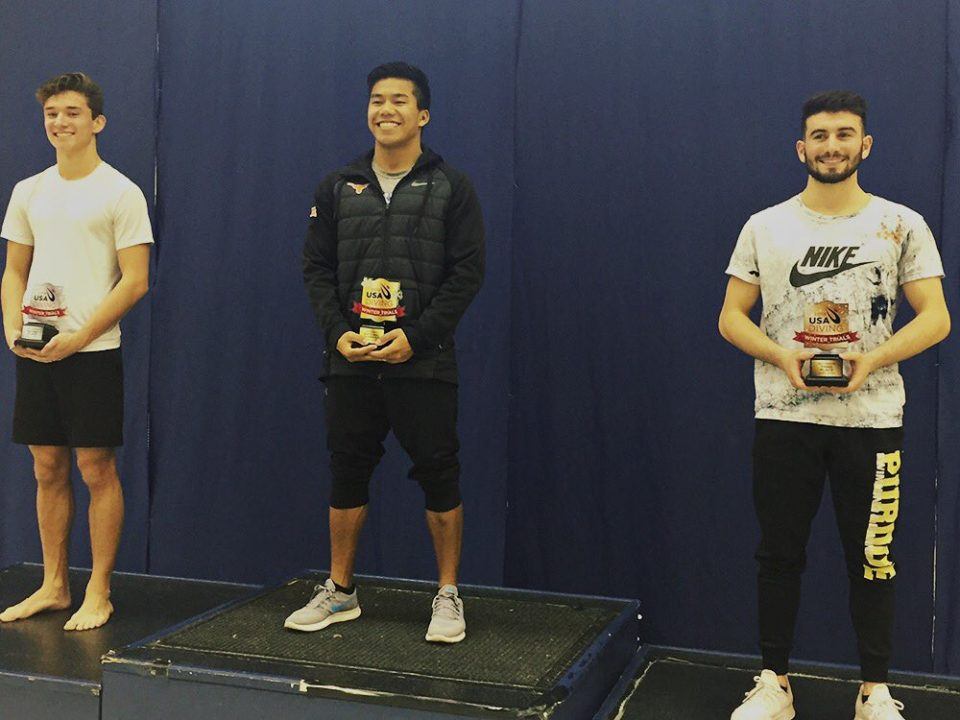 Jordan Windle captured the Winter Trials title in the men’s platform with 796.85 total points, while Lauren Reedy was crowned champion in the women’s 3-meter with 592.30 overall points. Current photo via USA Diving

In Friday morning’s men’s platform preliminaries, Windle climbed his way to first place with 386.80 points to lead the men entering the finals. His momentum carried into the finals as the Texas Longhorn never dropped from the top spot, as his first four dives, including a back 3 ½ tuck that scored 77.55 points in the second round, scored above 70.00 points. Despite missing a dive in the final round, Windle’s consistency in the previous five dives allowed him to remain in first place and be crowned champion of the men’s platform. Tyler Downs (Ballwin, Mo.) placed second, just 21.10 points behind Windle, while Brandon Loschiavo (Huntington Beach, Calif./West Lafayette, Ind.) finished third with 766.45 points.

Reedy completed the preliminaries at fourth place with 273.50 points but proved to be resilient in the finals as she climbed her way to the top of the leaderboard to take home the gold. After moving from fourth place to second through the first four rounds of competition Friday afternoon, a reverse 2 ½ pike for 63.00 points put Reedy 6.00 points ahead of Krysta Palmer (Carson City, Nev./Reno, Nev.) for first place going into the final round. She saved her best dive for last when she dove a front 3 ½ pike for 71.30 points to capture the title in the women’s 3-meter event. Palmer finished 18.80 points behind Reedy to earn second place, while Emily Bretscher (Knoxville, Tenn./West Lafayette, Ind.), who had led the women in Friday morning’s preliminaries, placed third with 560.15 points.

The 2018 USA Diving Winter Trials wrapped up competition with divers being crowned in 12 events.