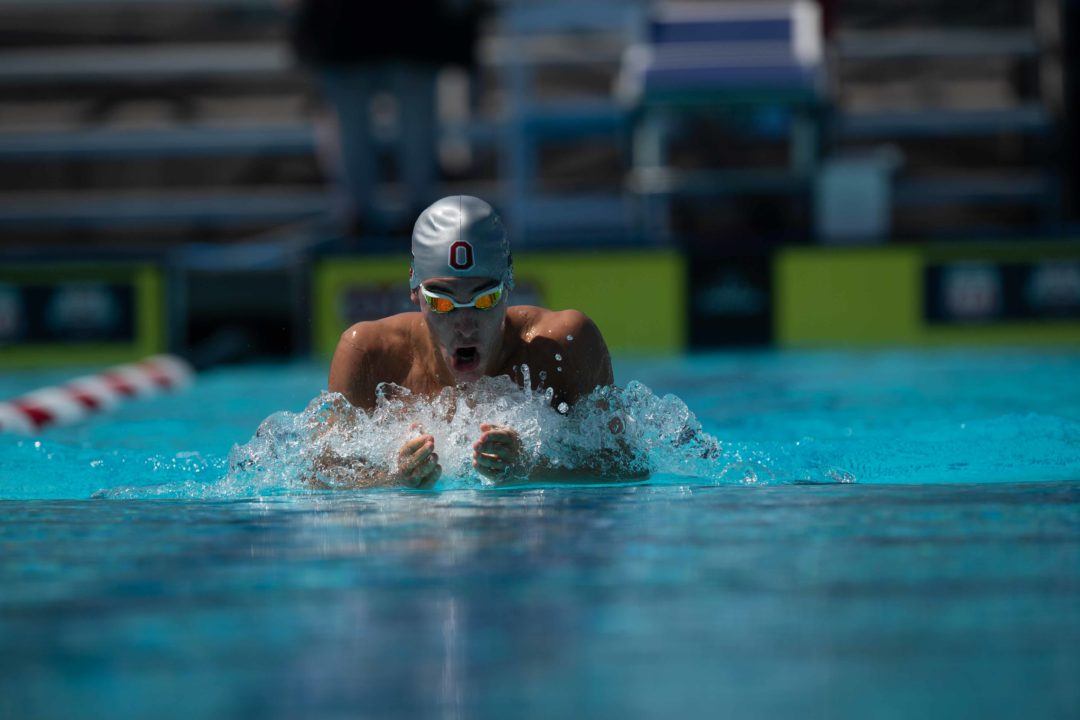 In the 100m breast, Jason Mathews and Hudson McDaniel of Ohio State went 1-2, with Mathews at 1:01.42 and McDaniel at 1:01.73 for new Wave II cuts. Current photo via Mike Lewis/Ola Vista Photography

As conference season comes to a close, the Ohio State Last Chance Invite offered one last day of racing for NCAA hopefuls and Olympic Trials cut opportunities in Columbus.

While there were no likely NCAA-qualifying swims, there were a bunch of new Olympic Trials cuts today.

Michigan’s Will Roberts achieved a Wave II cut in the 200m fly, hitting a lifetime best of 1:59.59. That’s his first time under two minutes, beating his old best of 2:00.62 from 2019 Summer Nationals, and he slips by the Wave II standard after previously only having a Wave I cut. Roberts already has Wave II cuts in the 400m and 800m free.

In the 100m breast, Jason Mathews and Hudson McDaniel of Ohio State went 1-2. Mathews was 1:01.42 and McDaniel 1:01.73, as Mathews dropped a half-second off of his old best and McDaniel slashed more than three seconds off of his. Both now have Wave II cuts, and it’s McDaniel’s first OT cut ever.

For the Wolverines, Cam Peel improved his lifetime best in the 50m free, going from 22.99 to 22.74, now just .03 off of the Wave II cut. His teammate, freshman Bence Szabados, was just off of his best with a 23.09. Szabados represents Hungary internationally.

Purdue’s Nikola Acin, a Serbian national, broke 50 seconds in the 100m free for the second time ever, posting a lifetime best 49.26

The notable yards swim came from Indiana freshman Tomer Frankel in the 200y fly, where he clocked a 1:43.73. That’s a lifetime best and only the second time he’s swum that in yards. Frankel won the 100y fly and finished top-four in the 200y free and 100y free at the Big Ten Championships this week.