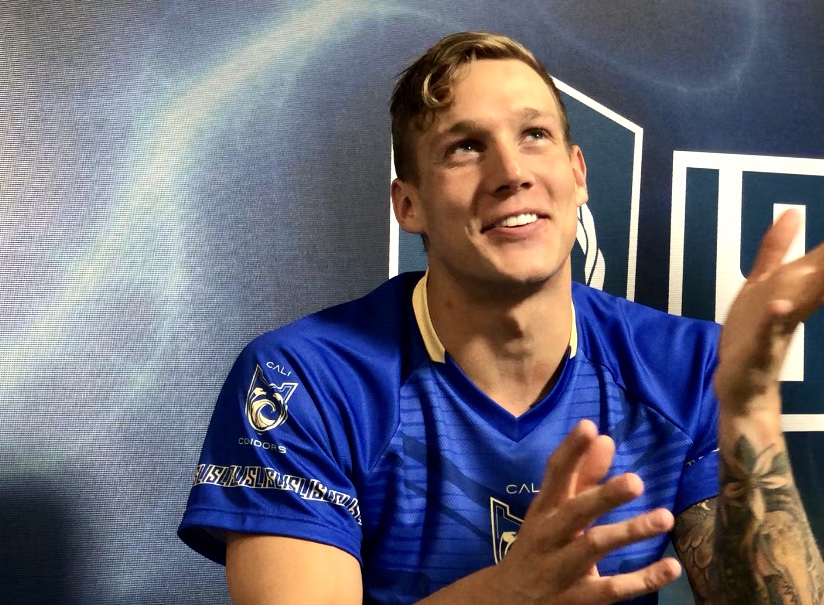 After day 1 in College Park, Maryland, there are 2 clear and distinct team battles shaping up.

The Cali Condors and LA Current, the two teams that are virtually locked in for the final in Las Vegas, are separated by only .5 points. The sub-battle is for 3rd place where the New York Breakers and DC Trident are separated by 7.5 points. While neither of those teams are going to make the final, they are swimming for important bragging rights and avoiding the moniker of the last-place team in the U.S. – which could bleed over into recruiting for the 2020 season.

The Cream of the Crop

While there’s no advantage, per se, to either Cali or LA for winning the meet, the bragging rights loomed large on the athletes’ minds.

A pair of DQs for the LA Current, once of a 3rd-place finishing medley relay, cost them 17 points (and benefited the Condors by 6 points). That becomes huge because, as LA Current swimmer Matt Grevers pointed out in a post-meet interview, Caeleb Dressel looms for the Condors. Dressel is the presumed favorite in the triple-points, meet-ending skins event at every meet, and so every other team needs a lead going into that race to hold on for meet scoring. On paper, the Condors do have a better day 2 (thanks in large part to Dressel and the skins), but with neither team having its full roster, and with Leah Smith and Chase Kalisz back for the Current, that situation is shifting rapidly.

The Battle for 3rd

While not really important for the ultimate placement in the league (even if the Breakers get 3rd ahead of the Trident here, the Trident will still finish 3rd in the U.S. standings), this is still an important ‘bragging rights’ meet. A lot of conversations in the comments have been about the Breakers’ rather dismal performances in their first 2 meets in Lewisville and Budapest, where they were handily thumped by the London Roar, Iron, and LA Current.

But two things became clear on Saturday: one is that Group B, which featured the Breakers, was a tougher group than Group A, where the Trident swam, and so the relative gap for the Breakers to the rest of their group was probably overstated.

But that doesn’t explain the entirety of their narrow 7-point lead. The Breakers are swimming way better. In a few cases, that’s swimmers in the same events out-performing their previous races: Tayla Lovemore struggled in the team’s first meet in Lewisville, and now, after relay-only status in Budapest, she finished 3rd in the 100 fly, dropping a second-and-a-half. In other cases, some brilliant lineup changes have made a difference – the Breakers used freestyler Clyde Lewis in the 100 fly and shifted Michael Andrew to the 50 breast. Andrew, who struggled at both meets in that 100 fly, swam easily his best day of the season on Saturday, including his first win of the season when he tied with Matt Grevers in the 50 back.

But both teams had ups-and-downs on the day. The Trident had huge swims from Siobhan Haughey and Ian Finnerty, with the latter especially looking at peak performance in what is likely his last ISL meet of the season. The Trident benefited from a pair of breaststroke races on day 1, and while they’ll score big points in the 100 breast on day 2, they didn’t have anyone in the top 4 of either 50 free event on Saturday. That doesn’t bode well for the pending skins events, where Michael Andrew and Pernille Blume are both positioned for at least a semi-final finish.

Poor LA Current, they really did not need that relay DQ. I think it will probably prove to be the deciding factor between LA Current winning the derby and placing second. Unless they overperform projections tomorrow, which is possible but not likely, I’m guessing that Cali Condors wins it by a ~13 point margin.

The Breakers are not performing that much better than in Budapest. Exactly half of today’s 38 swims were faster than their Budapest counterparts, the other 19 were slower. All 6 relays were slower. Compare that to DC improving in 24 event including 5 relays since Naples, and the Condors swimming faster in 20 (3 relays). The only team even worse in this regard is the Current with 18 (0). It seems to me, that New York is on pace with what was expected of them based on the Budapest races. They are much better though than in Lewisville, but all teams are much better, than their first ISL meets.

Another statistic is swims faster/slower than at both previous meets: DCT… Read more »

Thank you, this is exactly what I was thinking but I didn’t feel like pulling up all the stats to back it up. Nice to see that we calculated the exact same totals for projected team scores!

I was also thinking that, contrary to their improved score, NY Breakers is actually slightly underperforming the projections so far in the derby, since they only have a 2.5 point lead over DC Trident, instead of 17 points. I keep saying that Breakers is not a bad team, despite getting crushed in their previous meets. Goes to show how much stronger Group B is compared to Group A!